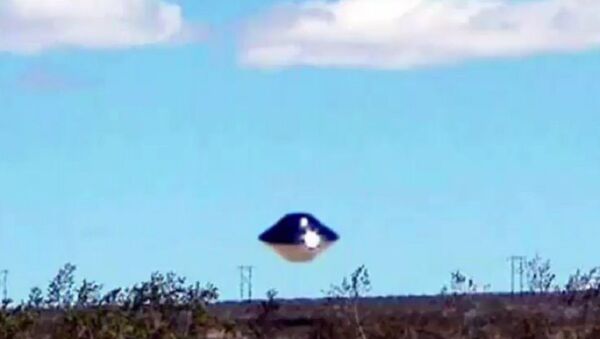 Muhammad Osman
All materialsWrite to the author
In 2017, three leaked videos featuring a mysterious Tic Tac-shaped unidentified flying object (UFO) being tracked by the US Navy were leaked. The videos, which refer to an alleged UFO sighting off the coast of California in 2004, became the subject of extensive media coverage and investigation before being declassified by the Pentagon in 2020.

Retired US Navy pilot commander David Fravor, who eye-witnessed and tracked the 2004 Tic Tac-shaped California UFO, has revealed previously unreported details about the incident in a recent interview with Russian-American YouTuber and MIT researcher Lex Fridman.

Fravor during the interview referred to the incident as “an act of war” and suggested that the object was “giant leap in technology” that would soon be disclosed.

Fravor, a former squadron leader who served in the US Navy for 18 years, told Fridman that the incident took place while he and with four other “trained observers”, were conducting a routine training mission. During the mission they watched a mysterious object perform extraordinary maneuvers off the California coast.

“This is not like we saw it and it was gone or I saw lights in the sky and it's gone – we watched this thing on a crystal clear day with four trained observers,” Fravor said in the 8 September interview.

The former pilot said that he and his crew had received an order to observe and identify a mysterious aircraft the Navy had been tracking for at least two weeks. Fravor added that he and fellow Commander Jim Slaight, along with two others, were sent out in fighter jets to observe.

Fravor narrated that the object suddenly appeared at an altitude of 80,000 feet, hurtled toward the sea, stopped instantly and then hovered at about 20,000 feet, before it all-too-quickly heading straight up into the atmosphere and away from the Earth.

“We see this little white Tic Tac because we’re about 20 feet above it and its going north, south, north, south, and it's abrupt,” Fravor said, noting that the UFO did not move like a helicopter or like any other known aircraft.

The aviator recalled that he insisted on approaching the object to “check it out”, flying to a distance of approximately half a mile away, before the unknown object flew away and disappeared within “less than a half second”.

“I’m going to meet it and I’m probably a half mile away and it’s coming across my nose …and it just accelerates and disappears at about 12,000 feet in less than a half second and it’s gone,” Fravor told Fridman. “I remember telling the guy in my back seat, ‘Dude, I dunno about you but I’m pretty weirded out’”.

After the UFO disappeared, Fravor narrated further that the team decided to fly back down towards the sea to check out what the Tic Tac-shaped object was potentially hovering around in the water, but to no purpose, as nothing notable was above the surface of the ocean when they arrived.

After landing, Fravor learned that the object had been successfully located on the radar of his colleague, Chad Underwood, and a trace video had been recorded. It was also noticed that their radar had been “jammed” at some point, something that is considered in military circles as “an act of war”.

“When you actively jam another platform, yes, it’s technically an act of war,” he stated.

In response to the host’s question on whether he believes the UFO was from another planet, Fravor responded, “I don't like to get into little green men but I don't think we've developed it [...] I think you can hide things for a while. This is a giant leap in technology”.

The Tic-Tac-shaped UFO sighting is said to have taken place on 10 November 2004. Thirteen years later, radar video of the incident was leaked and made available to the public, triggering wide media coverage and investigation, resulting in the Pentagon officially releasing the trace videos in 2020.

000000
Popular comments
... “giant leap in technology” that would soon be disclosed.. disclosed by whom? Surely not nasa, seti, astronomers nor military who've known about these et craft for decades.. but dare not say so. One needs to grab one's own disclosure. Here are the answers.. over 800 recorded face to face chats with et since 1943, with 20,000 pages of data received, They're here on a specific mission which is now completed, (passing on the Laws of the Creation, which previous Prophets failed to do). This group will stay in touch till their contacter passes, he's now 83. Open theyfly dot com for your answers. TicTac is another bunch of ets. We're told up to 30 et races visit a year. Some to observe much like the giant ufo that played cat and mouse with a JAL 747 freighter.. see. Wikipedia. Japan Airlines Flight 1628 incident. Or to capture a trophy.. such as the young Cessna pilot out of Melbourne.. see Wikipedia. Disappearance of Frederick Valentich. Some give implants for close tracking.. maybe the Large Greys.. . see. The Smoking Gun Pioneering alien implant researcher and surgeon, Dr. Roger Leir shares his biggest cases and never-before-seen photos of his work. Not forgetting the et trying, not so successfully to make contact, give advice.. with crop circles.. such as at Arecibo.. see message from Greys at.. Crop circle research dot com. The Chilbolton 'Arecibo message' Formation
TommyT
14 September 2020, 08:27 GMT2
000000
the pilot better buy some glasses all the nonsense comes from yanky land they dont know the difference between hollywood fake films or reality....
cleofe pisano
14 September 2020, 09:33 GMT1
000000
Newsfeed
0
New firstOld first
loader
LIVE
Заголовок открываемого материала
Access to the chat has been blocked for violating the rules . You will be able to participate again through:∞. If you do not agree with the blocking, please use the feedback form
The discussion is closed. You can participate in the discussion within 24 hours after the publication of the article.
To participate in the discussion
log in or register
loader
Chats
Заголовок открываемого материала
Worldwide
InternationalEnglishEnglishMundoEspañolSpanish
Europe
DeutschlandDeutschGermanFranceFrançaisFrenchΕλλάδαΕλληνικάGreekItaliaItalianoItalianČeská republikaČeštinaCzechPolskaPolskiPolishСрбиjаСрпскиSerbianLatvijaLatviešuLatvianLietuvaLietuviųLithuanianMoldovaMoldoveneascăMoldavianБеларусьБеларускiBelarusian
Transcaucasia
ԱրմենիաՀայերենArmenianАҧсныАҧсышәалаAbkhazХуссар ИрыстонИронауОssetianსაქართველოქართულიGeorgianAzərbaycanАzərbaycancaAzerbaijani
Middle East
Sputnik عربيArabicArabicTürkiyeTürkçeTurkishSputnik ایرانPersianPersianSputnik افغانستانDariDari
Central Asia
ҚазақстанҚазақ тіліKazakhКыргызстанКыргызчаKyrgyzOʻzbekistonЎзбекчаUzbekТоҷикистонТоҷикӣTajik
East & Southeast Asia
Việt NamTiếng ViệtVietnamese日本日本語Japanese中国中文Chinese
South America
BrasilPortuguêsPortuguese
NewsfeedBreaking
15:56 GMTUS-Mexico Border Detentions Highest Since 1986, Report Says
15:43 GMTMan Found Beheaded, Eviscerated in Southern France, 'Potentially Dangerous & Armed' Suspect at Large
15:14 GMTLondon Has 165,000 Homeless People But Afghan Refugees Could Jump to Front of Queue For Homes
14:57 GMTDC AG Seeks to Hold Zuckerberg Liable in Suit Stemming From Cambridge Analytica Scandal
14:48 GMTUS Accuses China of 'Stonewalling' the World on COVID-19 Origins Since January 2020
14:27 GMTPsaki Bashed Online as She Tries to Laugh Off Question About Night Flights Transporting Migrant Kids
14:22 GMT'It Brings Me Nightmares': Parkland Shooter Nikolas Cruz Pleads Guilty in 2018 High School Rampage
14:06 GMTTension Erupts in India's Uttar Pradesh After Dalit Cleaner Dies in Police Custody
14:01 GMTGermany's Greens Party Chief Accuses Russia of 'Playing Poker' With Gas Prices
13:49 GMTBitcoin Hits New All-Time High, Soaring Above $65,000
13:45 GMT'Hunter's Moon' Reigns in Night Sky Over Tehran
13:44 GMTLondon Police Shut Down Tube Station After Stabbing Attack on Night Bus Leaves Three Injured
13:41 GMTLet's Go Brandon, F**k Joe Biden Song Reaches Top Spot on iTunes Hip-Hop Charts
13:36 GMT'Absolute Harassment': Celebs, Netizens Fume After Court Rejects Star Kid Aryan Khan's Bail Plea
13:33 GMTUS Military Base Bethesda Housing Walter Reed Medical Center on Lockdown Over Reports of Bomb Threat
13:22 GMTFrench Feminist Group Sues Miss France Beauty Pageant for Allegedly Violating Country’s Laws
13:18 GMTSpain's La Palma Suffers Strongest Earthquake Since Volcanic Eruption
13:16 GMTTrump Organisation May Be Under New Criminal Probe Over Tax Schemes
13:12 GMTSuspect in Assassination Plot on Dutch Prime Minister Denies His Guilt, Lawyer Says
13:09 GMTUK Business Minister ‘Categorically’ Rules Out New COVID-19 Lockdown