Tory Peer Warns Not to Sell Food Production ‘Down the River’ as UK, US at Impasse Over Trade Deal 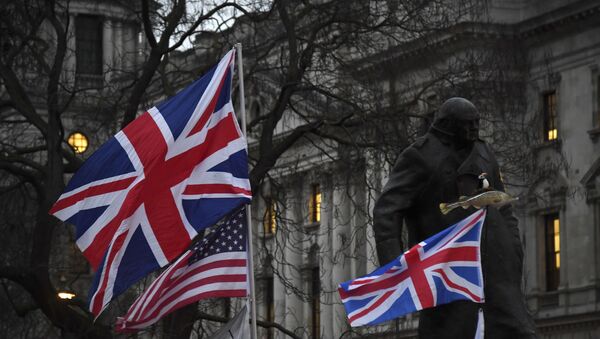 Oleg Burunov
All materialsWrite to the author
London and Washington have been negotiating a bilateral trade deal since the start of this year following the UK’s departure from the EU, a process that comes amid disagreements over food standards and allowing US agricultural products into Britain.

The UK’s upper house of Parliament is considering blocking imports of hormone-fed beef and chlorine-washed chicken to the country in a move that may deal a new blow to Prime Minister Boris Johnson’s hope to clinch a post-Brexit trade deal with the US, The Independent reports.

Later in the day, the House of Lords is due to vote on giving more authority to a new advisory body which should ensure that London’s possible trade deal with Washington does not allow in low-quality food.

“We don’t want our food supply undermined by imported food from countries with poorer animal welfare standards, selling our food production down the river by negotiating cheap deals”, Baroness McIntosh, a Conservative peer and former shadow minister, told The Independent, voicing hope that her fellow peers’ amendments “will go through”.

The amendments stipulate that the new commission would be retained for at least four years and will be independent of the Department of Trade.

Baroness McIntosh underscored “an absolute need” for creating the commission, adding that “the government can’t change food safety or animal welfare standards at the stroke of a pen”.

“It is illegal to import chlorine-washed chicken and hormone-fed beef into the UK and any changes would require new legislation to be brought before this parliament. We remain focused on getting a deal that works in the best interests of our farmers and consumers”, the spokesperson pointed out.

US, UK at Odds Over Trade Deal

The statement came after the UK’s International Trade Secretary Liz Truss made it clear in July that London was not ready to walk away from UK food safety standards in order to reach a trade agreement with the US.

"It is against the law to import chlorinated chicken and hormone-injected beef and we will not be negotiating that away as part of a trade deal”, Truss said. Her comments followed a report that Prime Minister Johnson was ready to loosen restrictions related to hormone-injected meat to secure a stronger economic relationship with the US, despite warnings from the UK's farming industry.

London and Washington have been negotiating a trade deal since the beginning of 2020, following the UK’s exit from the EU. Both Johnson and Truss initially hoped that the deal would be struck by the end of summer 2020, but in June the trade secretary said that there was no “deadline” for the deal with Washington, adding that the UK government was not going to “rush” into it.

Top American trade negotiator Robert Lighthizer also said that it was highly unlikely that the two would reach any trade agreement before the US November presidential election.

Meanwhile, a free trade deal between the UK and the EU, which should have been concluded by the end of the Brexit transition period on 31 December, has become an even more distant possibility after the UK government on Wednesday introduced the Internal Market Bill, which targets a specific part of the EU-UK Withdrawal Agreement, also known as the Brexit deal.

The bill specifically addresses the Northern Ireland Protocol, an element of the Brexit deal designed to prevent a hard border from returning to the island of Ireland.

Shortly after, US House Speaker Nancy Pelosi released a statement, in which she underscored the importance of Northern Ireland's Good Friday accord and said that "Brexit cannot be allowed to imperil the Good Friday Agreement".

'Pipe Dream': UK Won't Get Anything Out of a Trade Deal With US - Former US Diplomat
In a recent development, Labour Party leader Keir Starmer accused Johnson of having “turned the clock back” and of “reigniting old rows” by working to override the Withdrawal Agreement.

In a think piece published by The Sunday Telegraph, Starmer urged his party to support Johnson’s new Brexit legislation if the prime minister deals with “substantial cross-party concerns”. The Labour leader insisted that the UK-EU free trade deal can still be clinched if both sides “hunker down in good faith and break the logjam”.

“Labour is prepared to play its part in making that happen. If the government fixes the substantial cross-party concerns that have been raised about the internal market bill, then we are prepared to back it. But if they do not, and the talks collapse, then it is their failure and incompetence that will have let the British people down”, Starmer underlined.