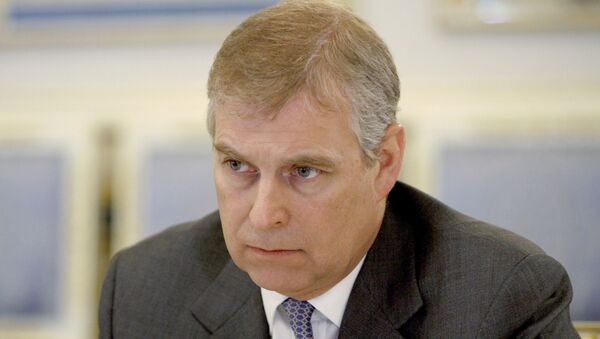 © Sputnik / Andrey Mosienko
/
Go to the photo bank
Subscribe
Max Gorbachev
All materialsWrite to the author
The Duke of York has been deeply implicated in the Jeffrey Epstein sex scandal. One of the billionaire’s alleged victims, Virginia Giuffre, claims she was trafficked by Epstein to London, where she was forced to have sex with Prince Andrew on at least three occasions, including when she was 17. The royal has categorically denied the allegation.

Prince Andrew, the third child of Queen Elizabeth II and Prince Philip, will be airbrushed out of events marking the birthday of the Duke of Edinburgh because of his ties with disgraced financier Jeffrey Epstein, The Sun reported, citing an unnamed source. Prince Philip will turn 100 in June next year.

The Duke of Edinburgh’s team also reportedly prohibited Andrew from writing the introduction to the exhibition programme, which is run by the Royal Collection Trust that looks after and displays art in 13 royal residences.

"There is a warning from up high to play down Andrew. He will be included as little as possible. It’s not whitewashing history because you can’t leave him out entirely. But it will not make a big deal of his relationship with the Duke of Edinburgh over the years. This is obviously proving difficult because he is his son and it’s playing down his role in the family", the unnamed source told The Sun

Prince Andrew has already been cut out of the wedding photos of his daughter, Princess Beatrice, that were recently shared by Buckingham Palace. The celebration of his own 60th birthday was cancelled after the royal came under more scrutiny from the media over his association with Jeffrey Epstein and Ghislaine Maxwell. Epstein was arrested in July of 2019 and charged with running a network sex trafficking minors. He was found dead in his cell on 10 August 2019 while awaiting trial.

Following his death, Prince Andrew faced a barrage of criticism and had to explain his relationship with the late billionaire. The royal also had to address accusations from one of Epstein’s alleged victims, Virginia Giuffre, who claimed she was trafficked by Epstein and his former girlfriend Ghislaine Maxwell to London, where she said she was forced to have sex with Prince Andrew on at least three occasions, including when she was an underage girl.

In an interview with the BBC, the Duke of York categorically denied having had sex with Giuffre, saying he was with his daughter on the day Giuffre said they were together. The royal also said he had no recollection of meeting the woman, although there is at least one photo appearing to show the Duke of York with Giuffre. In the same interview, Prince Andrew tried to distance himself from Epstein and his companion Ghislaine Maxwell, who is accused of grooming young girls for the billionaire. The duke said he wasn’t close with them, but admitted to having travelled on Epstein’s private plane, as well as visiting his private island and mansions.

The interview prompted a strong backlash from people and the prince had to step down from public duties, while major companies and banks withdrew from his Pitch@Palace project. In addition, a number of charities have also ditched him as their patron.

000000
Popular comments
EuroPox, probably Mossad readying it for the next "caretaker".