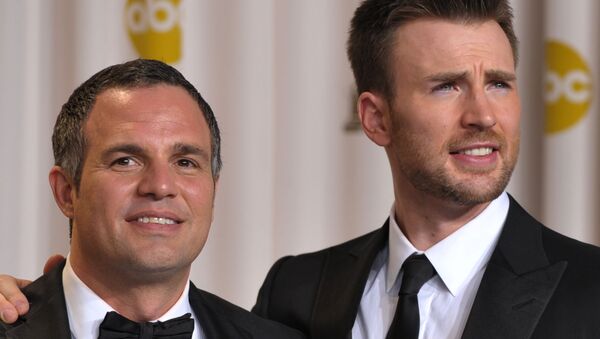 Irina Acheeva
correspondent
All materialsWrite to the author
Marvel's Captain America actor Chris Evans has found himself in an awkward situation after sharing a video on Instagram with pictures on his phone that allegedly included a nude photo.

American actor Mark Ruffalo, who gained worldwide fame after playing the Hulk in the Avengers movies, has defended his co-star Chris Evans over an accidentally leaked nude picture.

.@ChrisEvans Bro, while Trump is in office there is NOTHING you could possibly do to embarrass yourself. See... silver lining.

Although it is not known whether it was an intimate photo of Evans or not, fans have been divided over the matter, with some saying that it can happen to anyone and there is nothing to be ashamed of, while others considered it offensive.

However, most people came to the rescue, posting hundreds of photos with Chris Evans trying to encourage netizens not to re-share or post the photo online.

​Numerous netizens have made the photo a new meme, replacing the alleged dick pic with other pictures.

​​Chris Evans, 39, shared a seemingly benign Instagram story of him playing a popular game called "Heads Up" on 12 September.

The actor, with over 5.9 million followers on Instagram, forgot to edit the final bit of the footage, which exposed the gallery of videos and photos on his phone, including one featuring a penis.

​Evans promptly deleted the clip, but his fans were quicker, as they took screenshots of the picture and now "Chris Evans" is the number one trending topic on Twitter and Google Trends after the photo was shared and went viral.