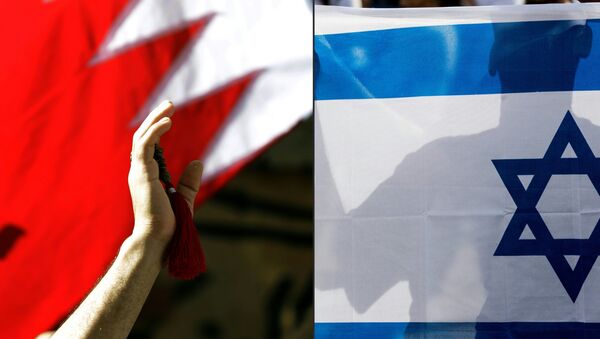 © AFP 2021 / JOSEPH EID and JACK GUEZ
Subscribe
Elizabeth Blade
All materials
Slightly less than a month after the United Arab Emirates announced that they would normalise ties with Israel, there was another dramatic announcement, this time coming out of neighbouring Bahrain.

On Friday, US President Donald Trump announced that Bahrain had followed in the footsteps of the UAE and given a green light for the establishment of full diplomatic relations with Israel, with reports suggesting that Bahraini monarch Hamad Bin Isa Al Khalifa is expected to attend a ceremony at the White House slated for next Monday and will sign a peace pact with the Jewish state.

For Rabbi Marc Schneier, who has been advising the Bahraini king for more than a decade now, that decision was a natural move.

"Out of all Gulf monarchs, the King of Bahrain has always been the most open about the establishment of ties with Israel", he said over the phone, suggesting that the step taken did not surprise many.

Over the years, Bahrain, which has a tiny Jewish community numbering less than a hundred people, has been regionally known as a hub of tolerance and as a country that had eyed ties with Israel as a definite possibility.

It was Bahrain that led other members of the Gulf Cooperation Council to designate Hezbollah, a bitter enemy of Israel, as a terror organisation in 2016; it was Bahrain that convinced the Arab League to follow suit and it was Manama that hosted the Peace to Prosperity summit that aimed at resolving the Israeli-Palestinian conflict and paving the way for the establishment of full diplomatic ties with the Jewish state.

But now Bahraini tolerance has also met pragmatism and a series of national interests.

"Bahrain is now going through significant economic changes and developments and they look at Israel as a country that can help them grow thanks to its hi-tech and technology", said Schneier.

However, Israel seems appealing for a different reason too - namely for protection against Iran.

Being a Shiite-majority country governed by a Sunni minority, Bahrain has always felt challenged by neighbouring Iran due to its influence over the country's Shiite population.

This was the case in 2011, for example, when mainly Shiite protesters took to the streets across Bahrain to demand reforms and political rights. Those rallies were handled with an iron fist by the local authorities, to the disdain of the Islamic Republic, which saw the conduct as another sign of the repression of the country's Shiite community.

"There is much uncertainty in regards to who will be the next US president, and that uncertainty led the Bahrainis to think that they cannot look at Washington as their defender, so they made that geopolitical shift and are now viewing Israel as a country that can potentially protect them".

That protection, however, doesn't boil down to military defence only. Just like the rest of the world, Bahrain is also coping with COVID-19 and although the situation there seems to be better than in Israel, Manama believes that joining efforts with the Jewish state in a bid to curb the disease is the right way forward.

However, for many Bahrainis, COVID-19, as well as other interests of the authorities, was not a reason good enough to normalise ties.

Committed to the Palestinian cause?

For many, it was no more than a betrayal of the so-called Palestinian cause and some have even taken to Twitter to vent anger at the decision under the hashtag #BahrainisAgainstNormalisation, or #بحرينيون_ضد_التطبيع.

Schneier understands where this frustration is coming from and rushes to reassure that the Bahraini monarch has not moved an inch from his previous position on the Palestinian front.

"The King is committed to the Palestinian people and the two-state solution; and he wants to do everything in his power to bring that conflict to its resolution".

Palestinian Ambassador Recalled From Manama After Bahrain Agrees to Normalize Ties With Israel
The only problem is that Israel, which has now been getting recognition without making any concessions on the Palestinian front, might not want to sit down for talks with the PA, waiting for Iran and other regional factors to do the trick and push other countries into its arms.

But Schneier believes that approach won't hold water in the long-run and sees Bahrain as a country that could mediate a peace deal between Israel and the Palestinians.

"You cannot simply ignore some five million Palestinians [living in the West Bank and Gaza] but to solve their problem you need mediators and I believe that Bahrain and the UAE can fill that role and bring Palestinians the economic hope and peace that they have been longing for".

000000
Popular comments
"he wants to do everything in his power". He never had much power. Now, he has thrown most of it away. "wants" is far short of "doing", or even "willing". "National interests" you know, both recent and long-term.
IandIandI
12 September 2020, 16:37 GMT1
000000
the poor fake sheikh is blind if he has not seen the map of Palestine from 1948 upto the bantustan proposed by kushner, but arabs have been damaged by 400 years of turkish rule.
satan-e-buzurg buster
12 September 2020, 16:53 GMT2
000000
Newsfeed
0
New firstOld first
loader
LIVE
Заголовок открываемого материала
Access to the chat has been blocked for violating the rules . You will be able to participate again through:∞. If you do not agree with the blocking, please use the feedback form
The discussion is closed. You can participate in the discussion within 24 hours after the publication of the article.
To participate in the discussion
log in or register
loader
Chats
Заголовок открываемого материала
Worldwide
InternationalEnglishEnglishMundoEspañolSpanish
Europe
DeutschlandDeutschGermanFranceFrançaisFrenchΕλλάδαΕλληνικάGreekItaliaItalianoItalianČeská republikaČeštinaCzechPolskaPolskiPolishСрбиjаСрпскиSerbianLatvijaLatviešuLatvianLietuvaLietuviųLithuanianMoldovaMoldoveneascăMoldavianБеларусьБеларускiBelarusian
Transcaucasia
ԱրմենիաՀայերենArmenianАҧсныАҧсышәалаAbkhazХуссар ИрыстонИронауОssetianსაქართველოქართულიGeorgianAzərbaycanАzərbaycancaAzerbaijani
Middle East
Sputnik عربيArabicArabicTürkiyeTürkçeTurkishSputnik ایرانPersianPersianSputnik افغانستانDariDari
Central Asia
ҚазақстанҚазақ тіліKazakhКыргызстанКыргызчаKyrgyzOʻzbekistonЎзбекчаUzbekТоҷикистонТоҷикӣTajik
East & Southeast Asia
Việt NamTiếng ViệtVietnamese日本日本語Japanese中国中文Chinese
South America
BrasilPortuguêsPortuguese
NewsfeedBreaking
06:06 GMTQueen Elizabeth II Picks Up Her 'MI6 Anti-Hacker Encrypted' Phone 'for Two People Only'
06:01 GMTFukushima Plant's Operator Starts Surveys to Prepare for Wastewater Dump, Reports Say
05:52 GMT'All Mouth and No Trousers': Boris Johnson 'Fed Up' With Priti Patel Over Migrant Channel Crossings
05:35 GMTFood Prices in Israel Much Higher Than in EU, Here's Why
04:46 GMTCOVID-19 Live Updates: Israel Closes Borders for Two Weeks Over Omicron Strain Fears
03:42 GMTHis Life, His Rules: Biden Spotted With Mask Down on His Chin While Inside Shop
03:28 GMTSouth Africa Laments Travel Restrictions, Calling Them ‘Punishment’ For ‘Excellent Science’
02:57 GMTGhislaine Maxwell Ready to Take Stand at Trial to 'Save Her Own Life' - Report
01:58 GMTMike Tyson Reveals Marijuana Makes Him 'Different Person' as He Launches New Cannabis Line
01:52 GMTConcerns About Spread of New Covid Strain Rise as Another Migrant Caravan Crosses Into US - Report
01:28 GMTMass Theft Occurs at Best Buy Store in Minnesota, Police Say
00:26 GMTTrump Keeps Mt. Rushmore Sculpture With His Face on It on Display in His Office
00:01 GMTA Glimpse of Hope: Biden Approval Rating Climbs 2 Points, But Still Scores Low on Economy - Poll
YesterdayAbbott Says Texas Is Ready For Possible Cold Winter Due to ‘Dozen Laws’ Signed
YesterdayBarnier Says France Has to 'Be Ruthless With the British' Amid Migrant Crisis - Report
YesterdayEx-Labour Leader Corbyn Slams 'Irrational' Suspension From Party One Year On
YesterdaySudanese Army Repels Attack by Ethiopian Troops With Casualties on Both Sides
YesterdayWHO Says No Need for Panic Over Omicron Coronavirus Strain as Much Remains Unknown
YesterdayBiden's First Christmas Tree Will Reportedly Cost Taxpayers $139,000
YesterdayMemes Flood Twitter After WHO Dubs New Covid Strain Omicron