Samuel L Jackson Says Donald Trump is 'Dangerous' for US, Wonders Who Would Vote For Him 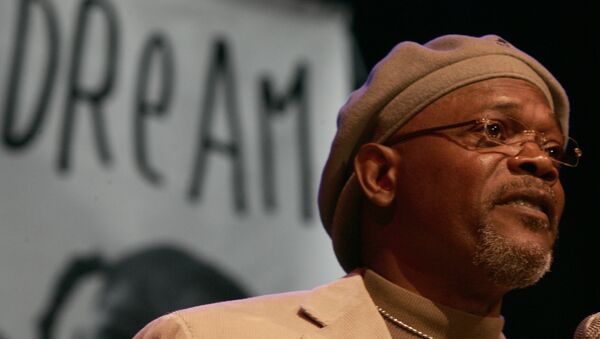 © AP Photo / Branimir Kvartuc
Subscribe
Max Gorbachev
All materialsWrite to the author
The iconic US actor is a harsh critic of the 45th president, whom he has referred to as a "motherf***er" who is "ruining the planet". The 70-year-old star also noted that people who do not speak against Donald Trump are “complicit”.

Hollywood star Samuel L Jackson has again hit out at US President Donald Trump, describing him as "dangerous" for the United States and the world. The actor made the statement during a late night show, Jimmy Kimmel Live, as a virtual guest host. During his appearance, Jackson reiterated recent allegations made against the president which Trump has denied. Among other things Jackson noted, were that Trump intentionally downplayed the risk of coronavirus and called US soldiers killed in action "losers" and "suckers". The actor also suggested that Trump encourages supporters to commit felonies, as at a North Carolina rally the president urged people to vote twice in the election.

"Who can still be voting for this guy after all the stuff that has gone down on his watch?”, the actor pointed out.

Jackson showed a spoof advertisement for the Trump campaign, which noted that voting for the 74-year-old Republican may cause side effects, such as "racism, sexism, nepotism, corruption, xenophobia, Islamophobia, anti-Semitism, destruction of the economy, the Constitution, the ecosystem".

The narrator in the video also alleged that anyone voting for Trump is "insane", and then proceeded to insult the president by stating:

Some social media users disagreed with Jackson and with the parody of Trump and his campaign efforts.

Several netizens asserted that Trump was not dangerous to the United States.

He is wrong. Trump isn't the one that is dangerous. Its the media and the detractors that are dangerous. They manipulate everyone by feeding on their emotions, stoking the flames of hatred and racism. That is dangerous.

From what I see as an outsider, it is the democratic party, its leaders, and the woke left that are destroying the beautiful America I came to know.

​Other users highlighted what has been touted as Trump’s successes in the economy and suggested that, unlike his predecessors, he didn't start wars.

Black unemployment was at its LOWEST IN HISTORY eight months ago! Trump is the greatest thing to happen to the USA in HISTORY!!! And, he's up for TWO NOBEL PRIZES, not a bs one like Obama, who was the worst Prez in history. These are overwhelming FACTS!

Yep impossible to vote for the first President not to have started a war in 40 years , brought troops home and brokered peace in the Middle East ! Captain Marvel star has read one comic too many 🤣😂

​Another remarked that the actor doesn’t care about ordinary people and shouldn’t be telling the public how to vote.

Here’s the thing about liberal hollywood they live up on the hills, wealthy, not a care in the world yet 1/5 Californians (regular blue collar workers) live below the poverty line and rely on benefits, 150k homeless & living on the streets. And you want that for all of America??

Great. A man that pretends for a living is telling us who should be running the country. 😐

​Jackson, alongside most the powerful US entertainment sector, has been a harsh critic of Trump ever since the real estate mogul announced in 2015 that he would make another run for president. Like Trump, Jackson actively uses Twitter where he frequently blasts the president. In 2018, he called Trump a "mother**cker" after the president alarmingly suggested arming school teachers as a way to address school shootings in the United States.

Jackson also claimed that Trump cheats at golf, and claimed that he had received a surprise bill for being a member of one of the latter's courses.

000000
Popular comments
He is a good actor, but that is it! He better stop doing politics. If he does not understand why the people are not voting for an incompetent possible vice-president and a corrupt possible president affected by dementia, then he better stop talking and start acting in movies where he is president.

C Han
13 September 2020, 01:42 GMT4
000000
Are American really dumb, hey haven't yet understood that the left wing, as much as the right wing, are both parts of the same satanic bird? Even after Trump, the lesser of the 2 evils, has been hammering down to them that he will vaccinate the whole nation by force, using the military...are you ever gonna wake up dear Americans?