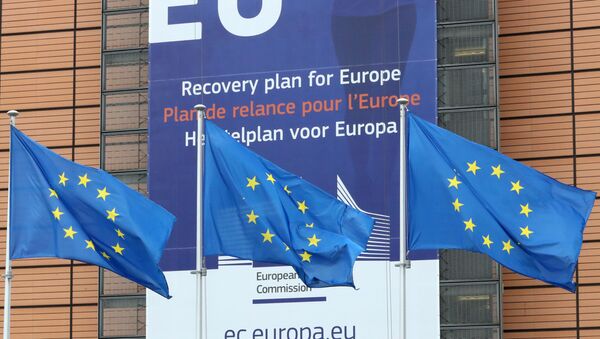 © REUTERS / Yves Herman
Subscribe
International
India
Africa
MOSCOW (Sputnik) - The European Union welcomed on Saturday the US-brokered establishment of diplomatic relations between Bahrain and Israel on the heels of an analogous Israel-UAE agreement, stressing its continuous commitment to promote the UN-championed two-state solution to the Israeli-Palestinian conflict.

"The EU welcomes the announced establishment of diplomatic relations between the Kingdom of Bahrain and Israel," the statement, released by the European Council, read.

Brussels acknowledged the role of the United States in facilitating this and a similar landmark agreement between Israel and the United Arab Emirates, describing it as a "positive contribution to peace and stability in the Middle East."

"The EU recalls its Declaration of 15 August 2020 and its longstanding position that a comprehensive settlement of the Arab-Israeli conflict requires a regional inclusive approach and engagement with both parties. In this regard, the EU remains firm in its commitment to a negotiated and viable two-state solution built upon the internationally agreed parameters," the statement added.

The European Union reasserted its readiness to support Israel and Palestine in their efforts to resume "meaningful negotiations on all final status issues."

On 13 August, Israel and the United Arab Emirates agreed to normalize ties, which among other things entailed Israel giving up its annexation plans in the West Bank. The two countries are planning to sign a variety of agreements for cooperation in investments, tourism, security and other areas in the coming weeks. The US expects other countries of the region to follow the lead.

The United Nations stands by the so-called two-state solution to the Israeli-Palestinian conflict, which means a peaceful coexistence of two sovereign states within mutually acceptable borders.