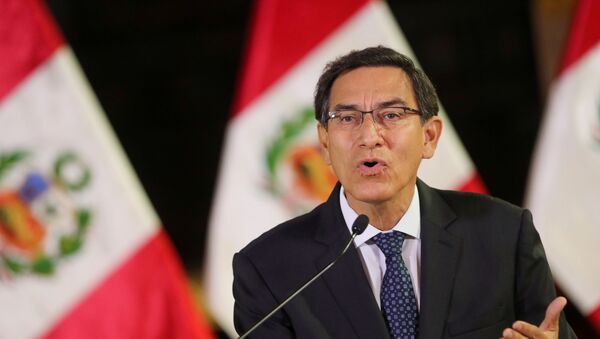 Peru's Congress on Friday voted to begin the process of removing Peruvian President Martín Vizcarra after accusing the president of "moral incapacity."

"With 65 votes in favor, 36 against and 24 abstentions, Congress admitted the motion of presidential vacancy (dismissal) against Martín Vizcarra," the Peruvian Congress declared Friday, according to local radio station RPP.

Lawmakers called for Vizcarra to be impeached after audio recordings of him telling other government officials about meetings with Richard Cisneros, a singer embroiled in a fraud case, were leaked.

In two of the three recordings, Vizcarra is allegedly heard talking to his advisers about trying to hide his meetings with Cisneros, an apparent friend of the president, EFE Agency reported.

According to Reuters, Cisneros, who also goes by the name Richard Swing, was awarded government contracts with the Ministry of Culture in exchange for presenting motivational talks worth around $49,500. Cisneros is accused of duping the Ministry of Culture by charging them to hold conferences and consultancies he is untrained for.

The exchange - as well as Cisneros' alleged connections to the president - are now being investigated by Congress.

Lawmakers have accused Vizcarra of trying to downplay his meetings with Cisneros in the recordings. In one of the tapes, Vizcarra reportedly reveals that Cisneros visited the Government Palace a total of six times, and that four of those visits were completed discreetly.

"We are all involved in this investigation, and the strategy is to all get out together," Vizcarra allegedly said, referring to the investigation into Cisneros' activities, EFE Agency reported.

Vizcarra on Friday told reporters that he would not resign.

"I am not going to resign. I have a commitment to Peru, and I will fulfill it until the last day of my mandate,” he said, calling the attempts to impeach him a "plot to destabilize the government," Reuters reported.

The recordings were released in Congress by opposition legislator Edgar Alarcón.

"The lie has short legs, and the truth, like the light, always prevails over the lie and the darkness," Alarcón told Congress Friday, EFE Agency reported.