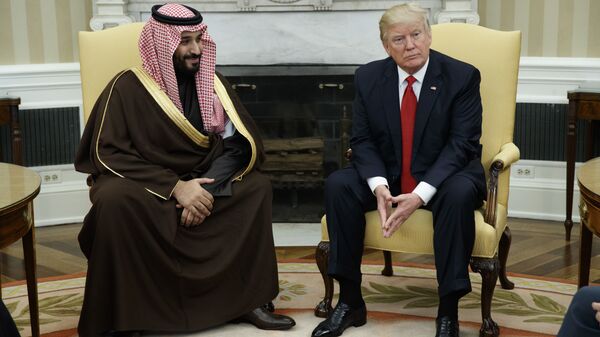 US President Donald Trump has admitted that he led a multi-year charge to take congressional heat off of Saudi Crown Prince Mohammad bin Salman, who ordered the brutal murder of 59-year-old Washington Post journalist Jamal Khashoggi, according to a new excerpt from renowned journalist Bob Woodward’s forthcoming book “Rage.”

Mutassim Khashoggi, the Khashoggi family attorney, issued a statement earlier this week, asserting that they accept the final sentences leveled against eight people tied to the murder and dismemberment of the 59-year-old opposition Saudi journalist in October 2018.

Five of the convicted individuals were given 20-year prison sentences, while three others were handed down sentences ranging between seven and 10 years, according to a spokesperson for the Saudi public prosecutor’s office.

While the family’s statement conveys acceptance regarding the “application of Allah's law and his judgment,” Trump apparently had a different perspective on how justice should be carried out.

Woodward, whose highly anticipated book “Rage” has provoked mixed moral feelings among commentators, conducted a total of 18 interviews with the US president and, until recently, kept the details of those conversations hidden.

"The people at the Post are upset about the Khashoggi killing," Woodward told Trump on January 22, according to Business Insider, citing an advanced copy of the book. "That is one of the most gruesome things. You yourself have said."

"Yeah, but Iran is killing 36 people a day, so —" Trump stated before he was presumably interrupted by the journalist, who redirected the interview’s focus to the Saudi crown prince’s involvement in Khashoggi’s death.

"I saved his a**," Trump claimed, speaking of the widespread demand to hold bin Salman accountable for ordering Khashoggi’s murder. "I was able to get Congress to leave him alone. I was able to get them to stop."

The CIA concluded in November 2018 that Khashoggi’s murder had been ordered by the Saudi crown prince. At the time, Riyadh denied any wrongdoing, and Trump communicated to senior White House officials that he wanted bin Salman to remain in power because Saudi Arabia keeps Iran in check, according to the Washington Post.

Allegations of the Saudi crown prince’s connection to Khashoggi’s murder were backed by both the United Nations and US lawmakers on both sides of the political spectrum, including Sens. Chris Van Hollen (D-MD), Todd Young (R-IN) and Angus King (I-ME).

"The failure to hold the crown prince accountable sends a terrible signal to people throughout the world and puts at risk other journalists - other critics - within Saudi Arabia and the journalists and critics of authoritarian regimes around the world,” Van Hollen said in September 2019, Middle East Eye reported.

A total of 18 suspects were originally arrested by Saudi authorities in October 2018, weeks after Khashoggi’s slaying. However, only 11 were put on trial in front of a Saudi court, which determined that the journalist’s murder was not premeditated, as Western officials had argued.

A Riyadh criminal court originally sentenced five individuals to death in December 2019 for “committing and directly participating in the murder of the victim.” Three individuals were found guilty of “covering up this crime and violating the law" and received prison sentences totaling 24 years.

The Khashoggi family pardoned the late journalist’s murderers in May, citing the holy month of Ramadan, thus sparing them from execution. It’s worth noting the opportunity to pardon the individuals came about due to the court’s assessment of the murder’s motivation.

“We, the sons of the martyr Jamal Khashoggi, announce that we forgive those who killed our father as we seek reward from God Almighty,” Salah Khashoggi, the journalist’s eldest son, expressed in a May tweet translated by the Associated Press.

“If a person forgives and makes reconciliation, his reward is due from Allah,” he said.

“The Saudi authorities are closing the case without the world knowing the truth of who is responsible for Jamal’s murder,” Hatice Cengiz, Khashoggi’s fiancee, argued in a written statement obtained by Reuters. “Who planned it, who ordered it, where is his body?”