Assange's Trial is 'One of Most Wantonly Cruel, Capricious Prosecutions,' Political Commentator Says 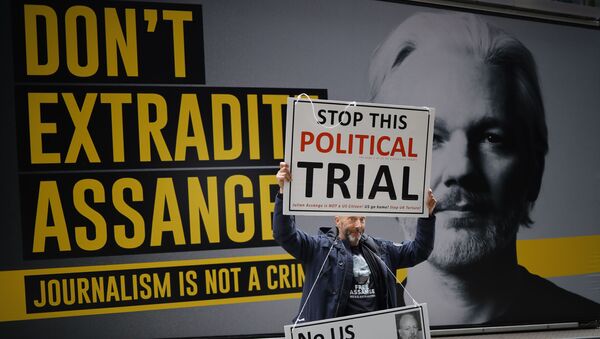 Julian Assange’s extradition hearing has been paused over fears that a lawyer has been exposed to coronavirus. The case started at the Old Bailey on Monday and has been scheduled to last four weeks. It will hear allegations from the US Department of Justice that Assange tried to recruit hackers to find classified government information.

Political Commentator John Steppling spoke to us about the trial so far.

Sputnik: What do you think about the charges that have been brought against Assange?

John Steppling: Well, I mean, in broad strokes, the charges are an assault on free speech and free journalism and that's something that's been happening in, in other contexts over the last decade. But Assange has come to be a kind of symbol for that.

And, you know, I mean, the short answer is they're absurd, and he shouldn't be on trial at all. But if you use a search engine, anyone you choose, Google or otherwise and type in Assange updates, what you find is a litany of negative articles about Assange, smears about Assange.

Somebody on a conservative side, John Hawkins titled his essay, “Five Reasons the CIA Should Have Already Killed Julian Assange” and this is the kind of stuff that's out there. So and there's a lot of others that are not much better.

Sputnik: How important do you think the outcome of this trial is for the fate of other whistleblowers?

John Steppling: Well, you know, it's a given that we know the outcome of the trial. It's just going to be how much they can suppress the details and render it invisible to the general public. Everybody is preoccupied with having lost their jobs in the United States.

What, there's 46 million unemployed, now 26 million jobs lost. People are desperate, increasingly so. And we're just hitting the wall of foreclosures and delinquencies and so forth. But it's true in other countries, Western countries too.

And people are distracted, they have more, you know, immediate concerns like eating and paying their rent. So it's a perfect atmosphere for the government to, to just make just sort of making Assange disappear and make the trial disappear, make the details disappear, you won't see much of when the trial finally concludes, and even up to the conclusion, you won't see many headlines or front-page stories about her I don't think anyway.

And what you see will be smears against Assange.

The press in general now is so corrupted, the mainstream press. I haven't found single op-ed in the mainstream press that defends Assange, not one. You have to find people like John Pilger and, and leftist sites, which, of course, are being disappeared from search engines, you know, we're seeing an increase in censorship.

So across the board everywhere in all platforms, and Assange is going to be a victim of that as well as anything else. I mean,  in 100 years or in 200 years, if the planet is still around, this will be looked at as one of the most wantonly cruel and capricious prosecutions of anyone ever.

Sputnik: Do you think because of how Assange has been treated, it might put off other whistleblowers or will it encourage them?

John Steppling: Well, that's the question, isn't it? You know, I fear right now that given the climate, the sort of, and I'm talking mostly about the United States and the UK, in the English speaking West.

What I see is a culture of fear. People are terrified of everything, whether it's conscious or not, and a culture of consensus and shaming. I mean, look at the abuse people get, the stigmatizing for not wearing a mask at the right time. You know, and, and this cuts across everything.

So I fear that I'm speaking out. I mean, I have made statements about COVID and different things about Assange, for that matter.

Assange Extradition Hearing to Resume as COVID-19 Suspect Tests Negative, WikiLeaks Says
And it's astonishing the vitriol that that one gets the anger and social media has become a sort of a cauldron of anger and hatred and rage. That's incoherent often, but I think this is because people feel powerless, terrified and just helpless.

So in this climate, how many people are going to speak out and blow the whistle on you know in whatever situation I fear maybe not many I, on the other hand, it's possible because there is a pushback against all of us we know that.