US Mourns the 19th Anniversary of the 9/11 Terrorist Attack

This Friday marks the 19th anniversary of the September 11th attacks - one of the most dramatic incidents in the history of contemporary America, which claimed the lives of nearly 3,000 people and altered the destinies of millions more.

In September 2001, al-Qaeda terrorists violently commandeered four passenger planes, crashing two of them into the twin towers of the World Trade Center in New York and another into the Pentagon.

The fourth jet came down in a field in Pennsylvania after being initially directed toward Washington.

Some 3,000 people from 90 countries lost their lives in the terrorist attacks, while another estimated 3,000 have succumbed since that time to diseases caused by working around 'Ground Zero', the site of the collapsed towers.

WARNING: Some of the following photos may offend sensibilities 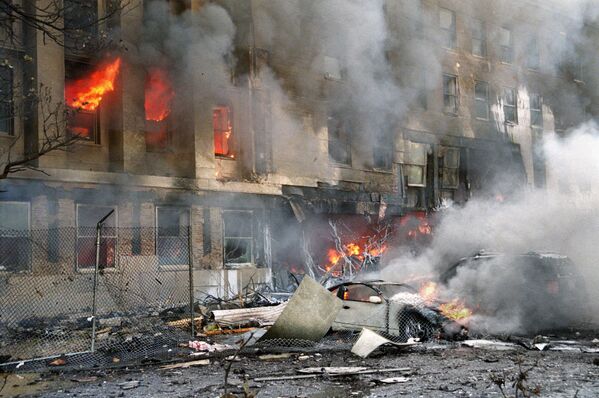 1/18
© AP Photo / Will Morris
In this 11 September 2001 file photo, damage to the outer ring of the Pentagon is shown after a hijacked airliner crashed into the building. 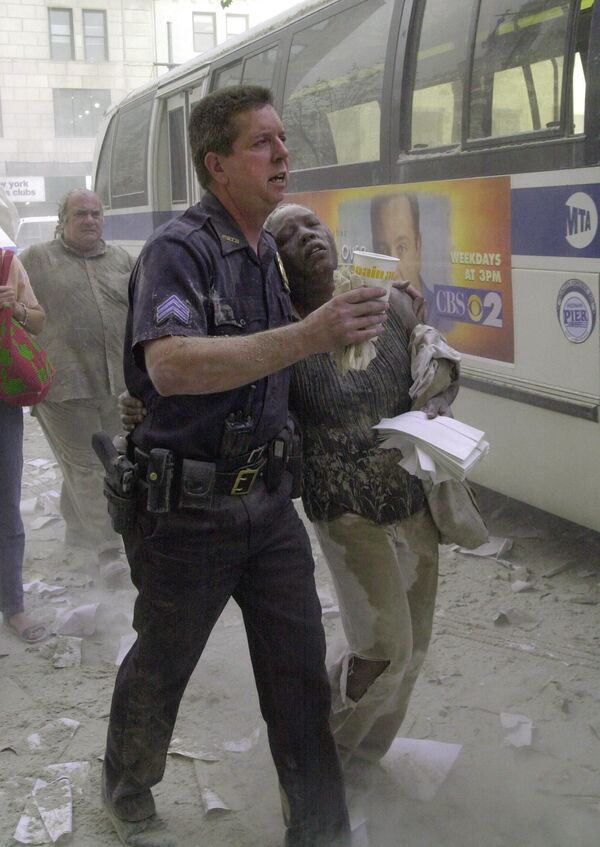 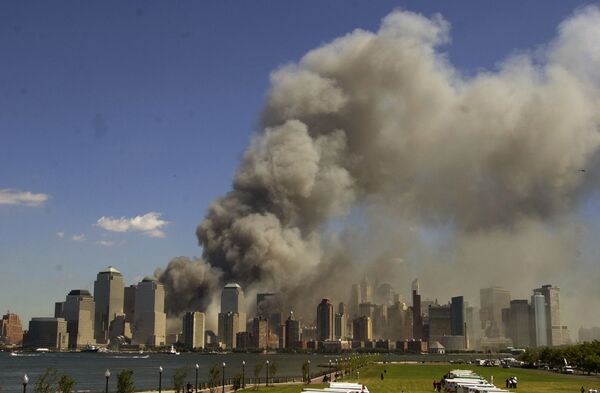 3/18
© AP Photo / Mike Derer
The World Trade Center is seen burning in New York City in this view from Liberty State Park in Jersey City, N.J., after the attacks on the towers and at the Pentagon in Washington. 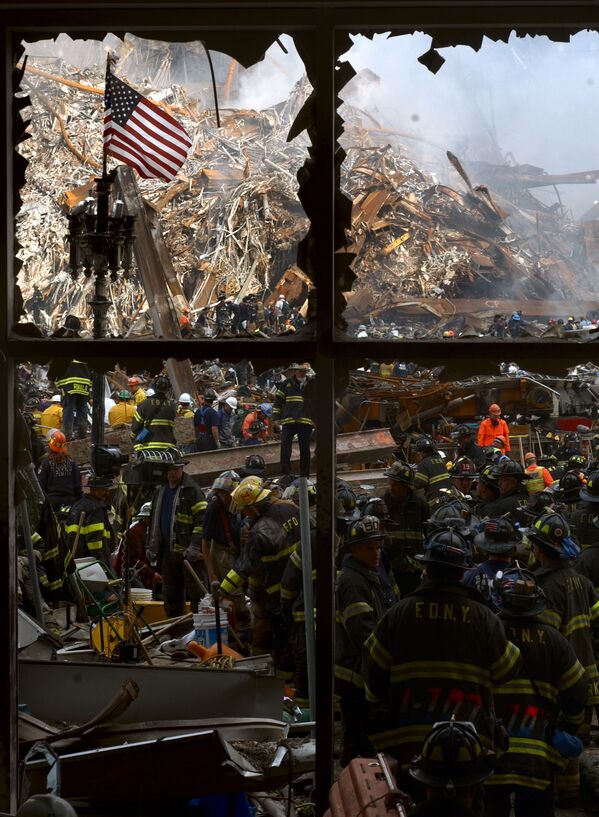 4/18
© Photo : Public domain / U.S. Navy / Preston Keres
New York City firemen walk past the American flag as they work their way toward the heart of the devastation that was once the World Trade Center. 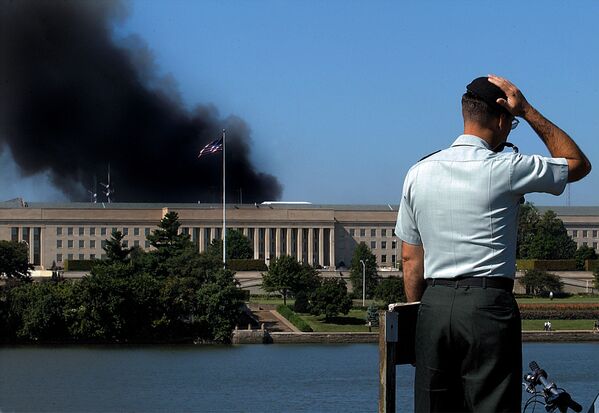 5/18
© AFP 2022 / Olivier Douliery
A Pentagon official outside the Pentagon, from which smoke is billowing following the 11 September 2001 attack. 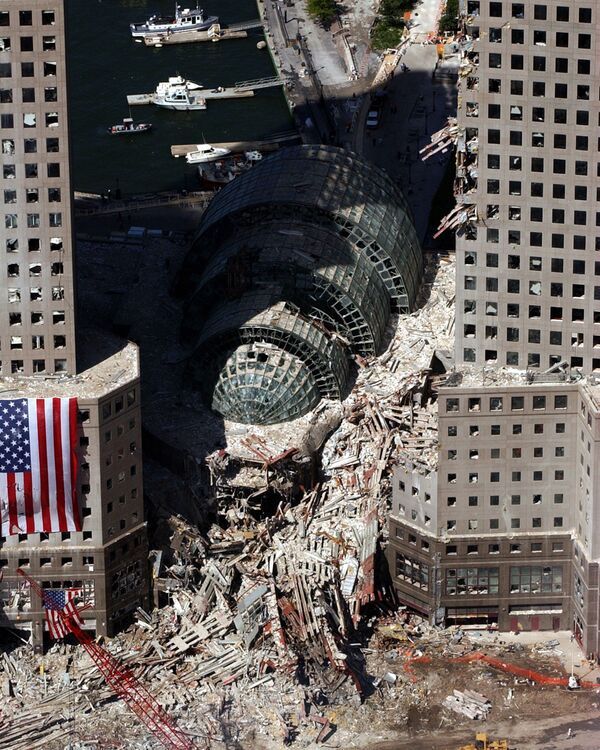 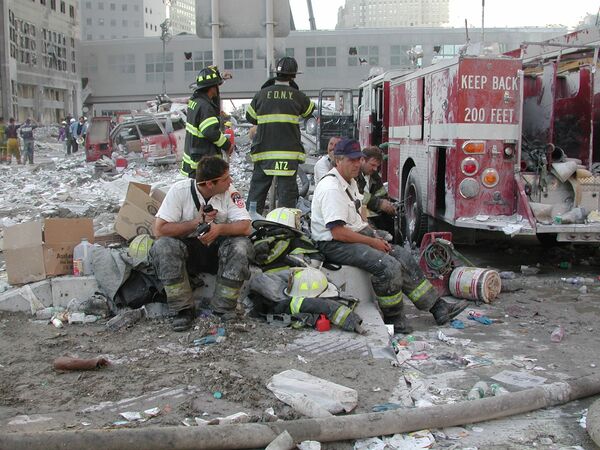 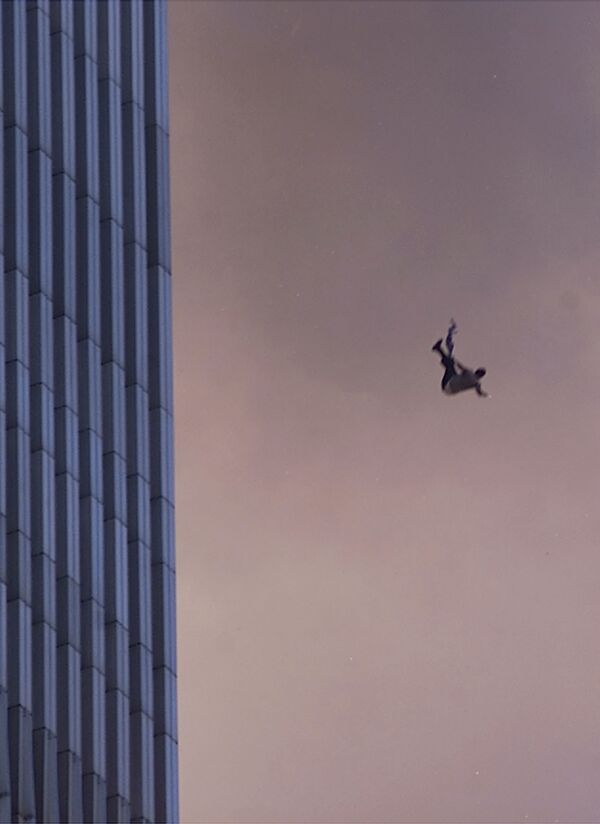 8/18
© AFP 2022 / Jose Jimenez/Primera Hora/Getty Images
WARNING: The photo above may be unsuitable for some viewers.
A person falls to his death from the World Trade Center after two planes hit the Twin Towers on 11 September 2001, in New York City. 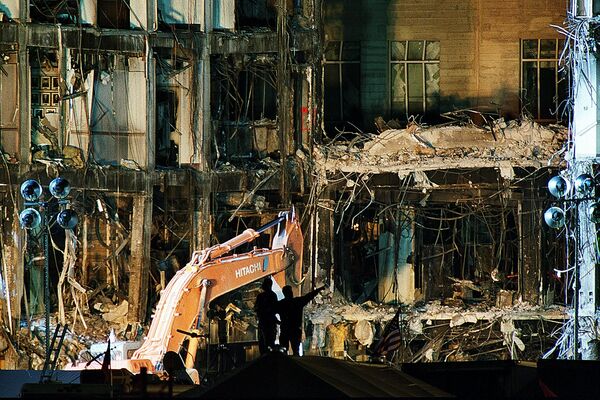 9/18
© AFP 2022 / Manny Ceneta
Rescue workers work late on 18 September 2001 in Washington, DC, sifting through piles of debris from the section of the Pentagon hit by the terrorist attack 11 September 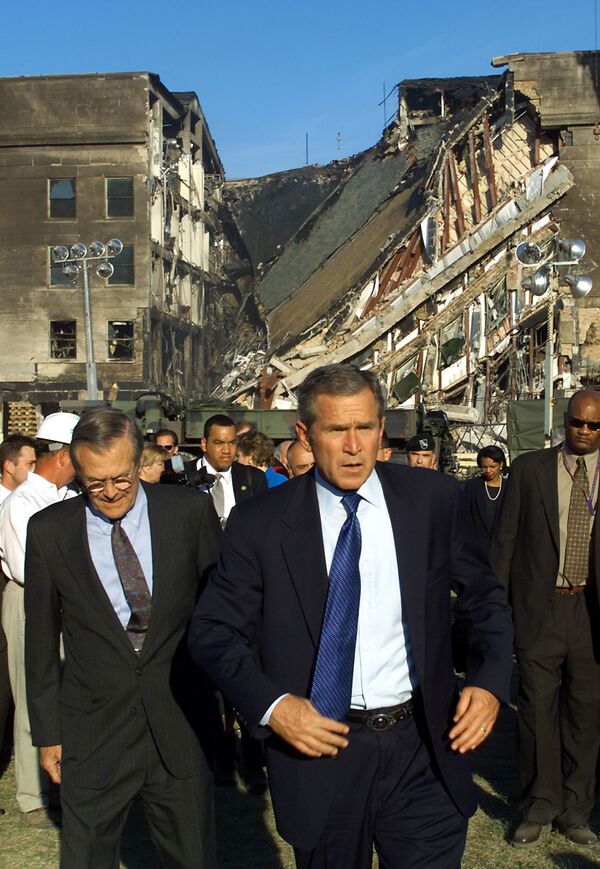 10/18
© AFP 2022 / Paul J. Richards
Then-US President George W. Bush (C) and then-US Secretary of Defence Donald Rumsfeld (L) tour the impact area (rear) at the Pentagon on 12 September 2001, where a hijacked airline was crashed into the building as part of a coordinated terrorist attack on the US. 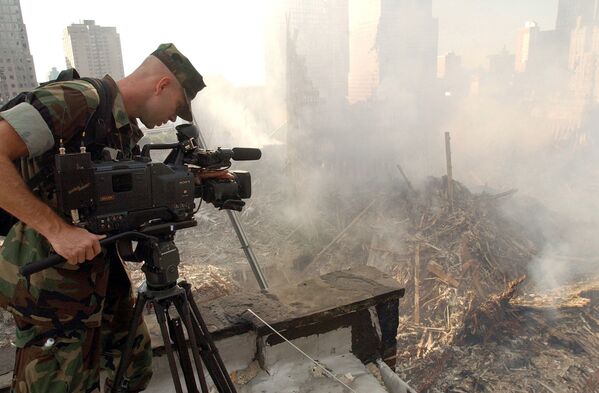 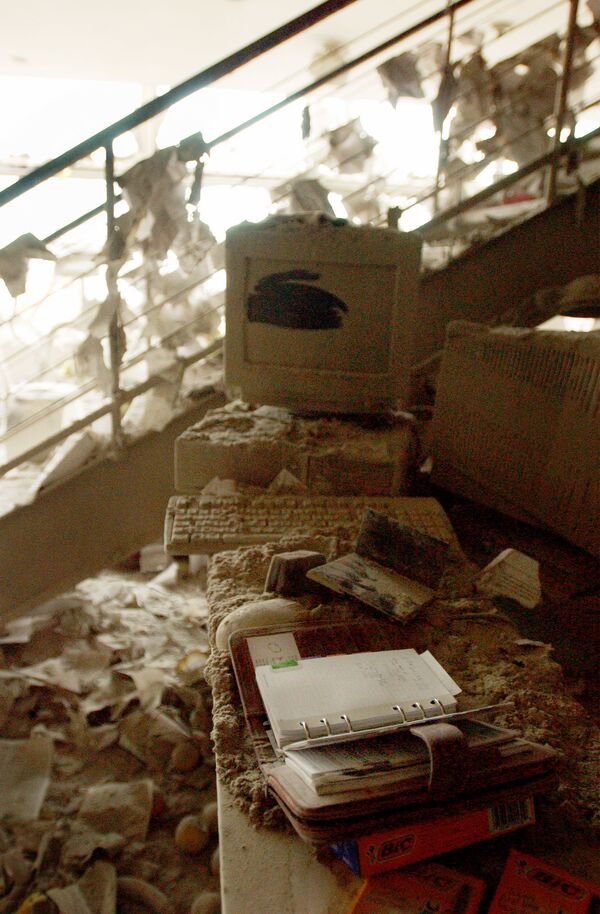 12/18
© Photo : Public domain / U.S. Navy / Jim Watson
Personal belongings were hastily abandoned when buildings were evacuated in the wake of the 11 September, terrorist attack on the World Trade Center. 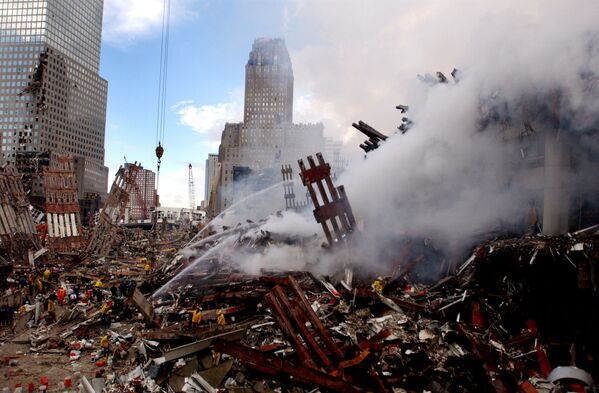 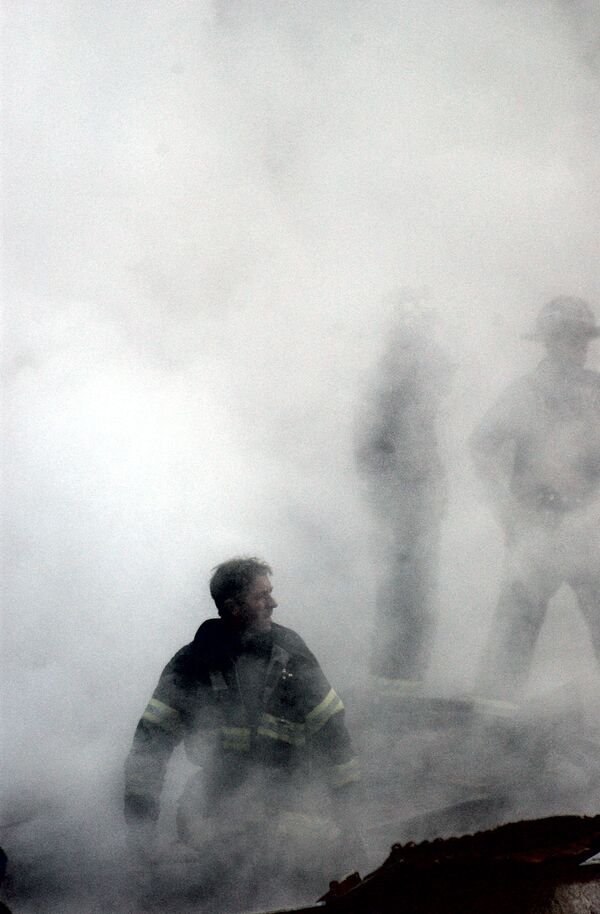 14/18
© Photo : Public domain / U.S. Navy / Jim Watson
A firefighter emerges from the smoke and debris of the World Trade Center. 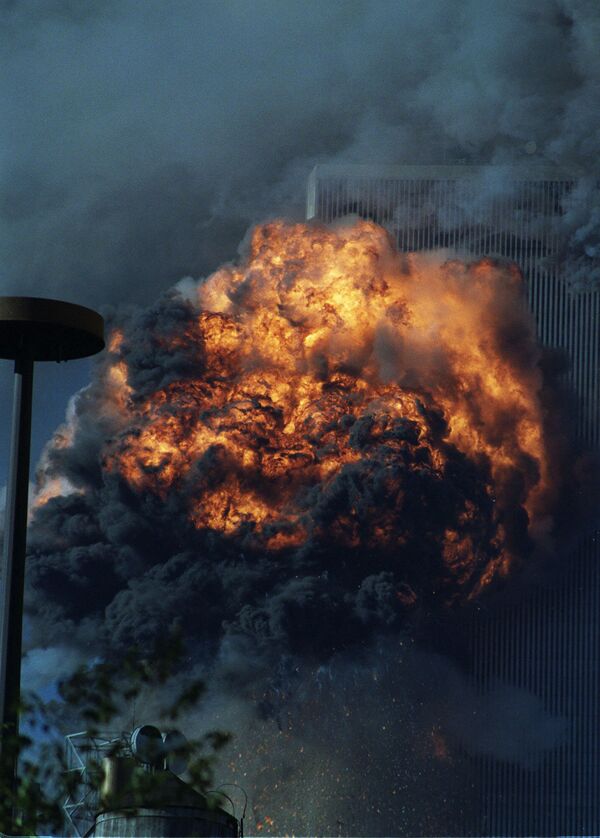 15/18
© AP Photo / Ernesto Mora
The south tower of the World Trade Center erupts in flames as it is struck by a second plane in a terrorist attack on the landmark complex. 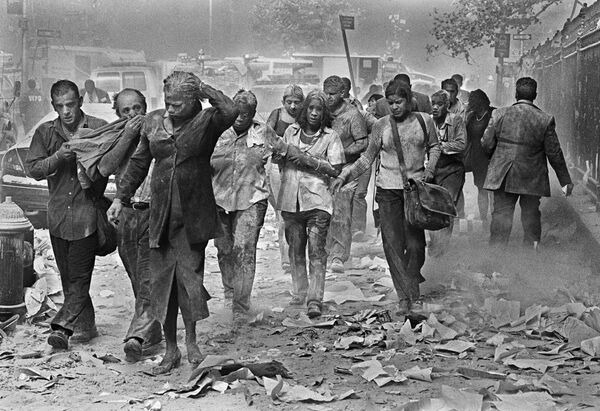 16/18
© AP Photo / Gulnara Samoilova
Survivors of the terrorist attacks on the World Trade Center in New York make their way through smoke, dust and debris on Fulton St., about a block from the collapsed towers in this Tuesday, September 11, 2001 file photo. 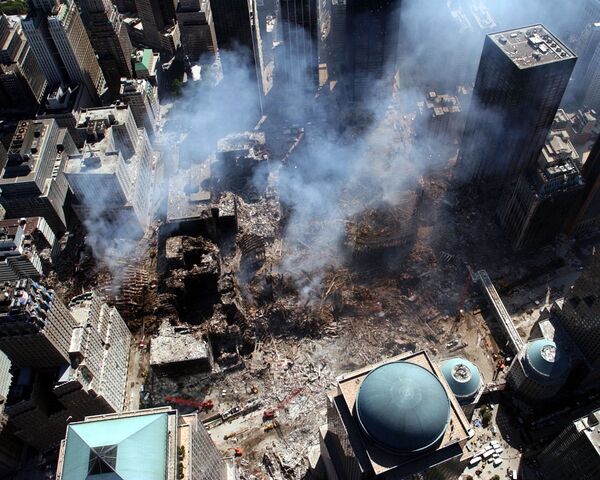 17/18
CC0 / /
An aerial view shows a small portion of the crime scene where the World Trade Center collapsed following the 11 September terrorist attack. 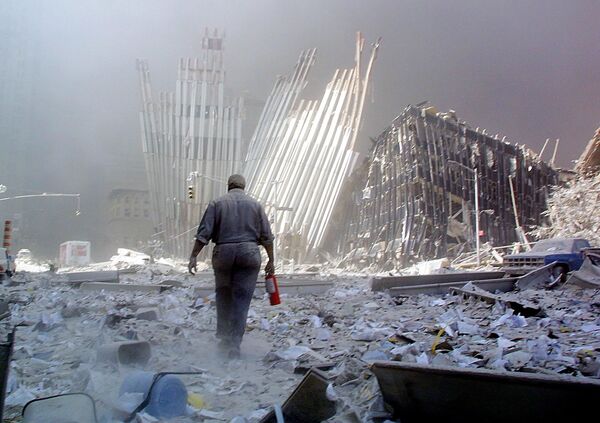 18/18
© AFP 2022 / Doug Kanter
A man with a fire extinguisher walks through rubble after the collapse of the first World Trade Center Tower on 11 September 2001, in New York. The man was shouting as he walked looking for victims who needed assistance.
Newsfeed
0
Access to the chat has been blocked for violating the rules . You will be able to participate again through:∞. If you do not agree with the blocking, please use the feedback form
The discussion is closed. You can participate in the discussion within 24 hours after the publication of the article.
To participate in the discussion
log in or register
loader
Chats
Заголовок открываемого материала