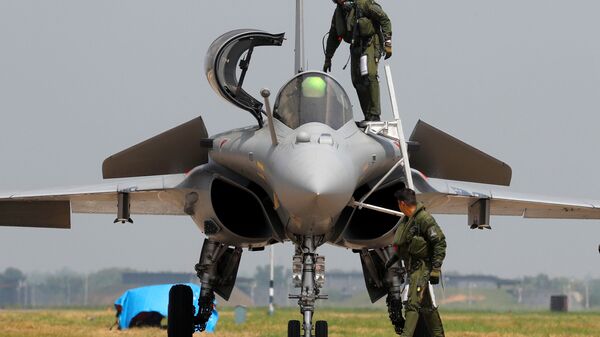 Dhairya Maheshwari
All materials
The five Rafale jets recently inducted into the Indian Air Force are part of a larger delivery of 36 fighter jets that India has ordered from France at a price of $8.7 billion.

The Rafale jets are meant to replace India’s ageing fleet of MIG-21's.

Why Did India Opt for Rafales Over Typhoons?

New Delhi’s choice of Rafale aircraft over Typhoons was said to have been motivated by three broad factors:

The Rafale jet is known for its wide ranging capabilities and can be employed for a range of purposes, including carrying out combat missions deep inside enemy territory, neutralising ground targets, including enemy defence systems as well as  its manoeuvrability in dogfights. The Eurofighter, on the other hand, is not known for excelling in air-to-ground combat operations.

While the French government had no qualms about India mounting nukes on its Rafale jets, the same wasn’t the case with Germany, according to Indian defence officials involved in negotiations as quoted by local media in 2017.

The nuclear triad signifies the capability to carry out nuclear ballistic missile strikes from land, air and water. 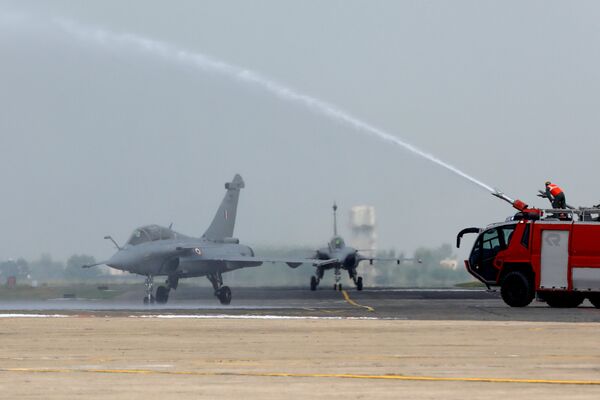 Though Airbus Defence and Space assured cooperation in India's choice of weapons, no explicit assurance on nuclear weapons was provided in the proposal.

Germany, one of the owners of the Typhoon project, is very anti-nuclear and so policymakers in India opted to go with their French competitor.

The fact that four different governments would have been involved in the Eurofighter project, as compared to just the French government in the case of Rafale, is said to have gone in Paris’ favour during the selection process.

According to an analysis by a defence expert, India’s past experience with Germany in the area of aviation technology transfer hasn’t been particularly good, especially when it came to Berlin's apparent reluctance in transferring key technology to India’s Light Combat Aircraft programme, which it had jointly developed with India’s state-owned Hindustan Aeronautics Limited (HAL).

Of the 36 Rafale fighter jets ordered by India from the French manufacturer Dassault Aviation, five officially became part of 17 Squadron of the Indian Air Force on 10 September. They will be based at Ambala in Haryana, about 200 kilometres north of Delhi.

French Minister of the Armed Forces Florence Parly joined Indian Defence Minister Rajnath Singh at the ceremony, along with top military brass from both countries.

The contract to supply India with 126 cutting edge MMCRAs officially kicked off in 2007, with the then government short-listing six vendors— Dassault Rafale, Eurofighter Typhoon (jointly manufactured by a consortium of British, German, Spanish and Italian companies), Russia’s MIG-35, F-16 Falcon (developed by Lockheed Martin, US), Boeing’s F/A-18 Super Hornet and the JAS-39 built in Sweden.

A major modification was proposed to the deal when Indian Prime Minister Narendra Modi took office in 2014 and asked for 36 jets to meet the urgent needs of the Indian Air Force, instead of the proposed 136.

Despite last-ditch efforts by Typhoon makers to convince a re-think in 2014, the Indian government stuck to its choice of Dassault Aviation, with France and India signing an inter-governmental agreement for the supply of 36 Rafale jets in September 2016 at a revised cost of $8.7 billion.

Significantly, the final offer made to the Indian government by Airbus Defence and Space, the manufacturer of the Typhoons, through a proposal in July 2014 was €59 million ($70 million) per unit.