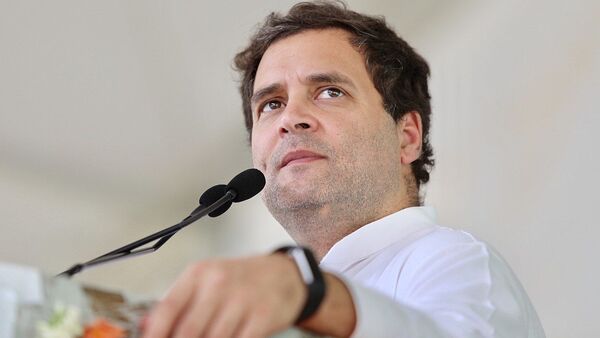 Ashutosh Kumar
Sputnik correspondent
All materialsWrite to the author
India's principal opposition party Congress has been criticising the government led by Prime Minister Narendra Modi over the past six months on various economic issues. The party has come down heavily on the economic slowdown, high oil prices, unemployment and the privatisation of government firms.

Taking to Twitter, the former chief of India’s main opposition party Congress said, “The policies of Modi government have caused the loss of crores (tens of millions) of jobs and a historic fall in GDP. It has crushed the future of India’s youth.”

The policies of Modi Govt have caused the loss of crores of jobs and a historic fall in GDP.

It has crushed the future of India’s youth. Let’s make the Govt listen to their voice.

On 31 August, India reported a massive 23.9 percent contraction in the country’s GDP for the months of April – June,  the first quarter of the current financial year (April 2020 – March 2021).

It compares with 5.2 percent GDP growth recorded in April – June last year and 3.1 percent in January – March this year.

The Indian economy had been slowing down since even before COVID-19 hit India's shores. From a high of 8.1 percent GDP growth in early 2018, the Indian economy has witnessed a consistent decline in growth over the last two years.

On the jobs front, the recent numbers from Centre for Monitoring the Indian Economy (CMIE), an economic research agency, pointed out in a July report that middle income and higher income households lost almost 30 percent of their income due to the pandemic, compared with last year.

The CMIE said in an August report that almost 18 million salaried Indians have lost their jobs since April this year. In India, a countrywide lockdown was imposed with effect from 25 March to control the spread of the contagion.

In the wake of the pandemic, the Indian government rolled out an economic stimulus package on 12 May.

Prime Minister Modi unveiled the $266 billion stimulus package while the Reserve Bank of India (RBI) has also pumped in liquidity worth $127 billion since February this year to stabilise the financial markets amid the pandemic.