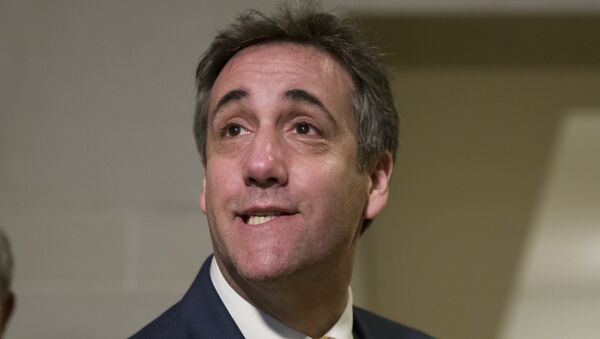 © AP Photo / Alex Brandon
Subscribe
Daria Bedenko
All materialsWrite to the author
US President Donald Trump appears to inspire many of the people around him to release books, including former National Security Adviser John Bolton, niece Mary Trump and journalist Bob Woodward, which are dedicated to the effects of Trump's policy and personality.

US President Donald Trump's former personal attorney and "fixer", Michael Cohen, on Thursday announced the release of a podcast, titled "Mea Culpa" ["My Fault"], about his relationship to the president.

The podcast is teased as "a raw and unfiltered shining a light into the dark corners of our current American Apocalypse" that is set to "dismantle Trump's legacy".

"Michael Cohen, the former attorney and personal fixer for Donald J. Trump, once vowed to take a bullet for the President. But that was before the country was brought to its knees by the President’s own lies and personal madness. Now, imprisoned in his home, his life, reputation and livelihood destroyed, Cohen is on a mission to right the wrongs he perpetuated on behalf of his boss", according to the "Mea Culpa" launch page on Apple Podcast.

​The teaser comes shortly after Cohen rolled out his new book, "Disloyal",on Tuesday, described as "the inside story of the real President Trump by his former attorney and personal adviser - the man who helped him to get into the Oval office".

The book rose to number three on the Amazon bestselling nonfiction chart.

The release falls in line with a series of other tomes on Trump rolled out earlier in the year, including "The Room Where It Happened" by Trump's former national security adviser, John Bolton, and "Too Much And Never Enough" by the president's niece, Mary Trump.

Currently, another book about Trump is rocking headlines: "Rage", written by Bob Woodward and covering a series of on-the-record interviews with Trump that has apparently angered POTUS. The book particularly reveals that Trump attempted to "downplay" the coronavirus pandemic to avoid panic, which has caused waves of criticism.

Cohen pleaded guilty to lying to Congress, tax evasion and campaign finance fraud in 2018. His now bestselling book was immediately lambasted by the White House, as press secretary Kayleigh McEnany slammed the former Trump confidante as "a disgraced felon and disbarred lawyer who lied to Congress", calling the book "his latest attempt to profit off of lies".

000000
Popular comments
If these people really had something worthwhile to say, their books would have come out way b fire the election. Books that try hard to vilify Trump right before the election are really just mediocre Dem campaign stunts.
Regula
11 September 2020, 06:29 GMT2
000000
Newsfeed
0
New firstOld first
loader
LIVE
Заголовок открываемого материала
Access to the chat has been blocked for violating the rules . You will be able to participate again through:∞. If you do not agree with the blocking, please use the feedback form
The discussion is closed. You can participate in the discussion within 24 hours after the publication of the article.
To participate in the discussion
log in or register
loader
Chats
Заголовок открываемого материала
Worldwide
InternationalEnglishEnglishMundoEspañolSpanish
Europe
DeutschlandDeutschGermanFranceFrançaisFrenchΕλλάδαΕλληνικάGreekItaliaItalianoItalianČeská republikaČeštinaCzechPolskaPolskiPolishСрбиjаСрпскиSerbianLatvijaLatviešuLatvianLietuvaLietuviųLithuanianMoldovaMoldoveneascăMoldavianБеларусьБеларускiBelarusian
Transcaucasia
ԱրմենիաՀայերենArmenianАҧсныАҧсышәалаAbkhazХуссар ИрыстонИронауОssetianსაქართველოქართულიGeorgianAzərbaycanАzərbaycancaAzerbaijani
Middle East
Sputnik عربيArabicArabicTürkiyeTürkçeTurkishSputnik ایرانPersianPersianSputnik افغانستانDariDari
Central Asia
ҚазақстанҚазақ тіліKazakhКыргызстанКыргызчаKyrgyzOʻzbekistonЎзбекчаUzbekТоҷикистонТоҷикӣTajik
East & Southeast Asia
Việt NamTiếng ViệtVietnamese日本日本語Japanese俄罗斯卫星通讯社中文（简体）Chinese (simplified)俄罗斯卫星通讯社中文（繁体）Chinese (traditional)
South America
BrasilPortuguêsPortuguese
NewsfeedBreaking
16:11 GMTResignation of US Special Envoy for Haiti Over Deportations 'Mischaracterised', State Dept. Suggests
15:44 GMTUS Health Official Wants to 'Blow-Dart' COVID Vax Into Black People in New Project Veritas Video
15:25 GMTTaliban Plans to Form Commission in 2022 to Draft New Constitution
15:22 GMTWatch Fuego Volcano Erupt in Guatemala, Spewing Out Vast Amounts of Smoke and Lava
15:17 GMTRussian Officials Assess Proposal to Populate Siberia With 'Resurrected' Woolly Mammoths
15:13 GMTParis to Bill Canberra for Cancellation of Submarine Deal After AUKUS Pact
14:51 GMT'Britney VS Spears': Pop Star's Fiancé Accuses Docu Makers of Earning Profit From Her Story
14:41 GMTRussian Union of Journalists Chief Slams 'Unacceptable' US Sanctions Against Colleagues
14:31 GMTUS Investment Firm Purchases Italy's Oldest Football Team
14:29 GMTUS to Find Ways to Get More Help to Haitian Migrants After US Envoy Resigned, State Dept. Says
14:25 GMTAnthony Joshua Says He Would ‘Fight King Kong' if He Had to as He Defends Titles Against Usyk
14:18 GMTFormer Nazi Helmut Oberlander Dies in Canada Before He Could Be Deported, Reports Say
14:07 GMTWhat's Behind Africa's Increasing Drive to Launch Satellites?
14:06 GMTExpo 2020 in Dubai Set to Boost Economic Development in Arab World, Organiser Says
13:58 GMTTwo Afghan Evacuees Charged With Sexual, Physical Assault in US, Justice Department Says
13:51 GMTBritish Government Preparing for 'Worst-Case Scenario' of Gas Prices, Says MP
13:43 GMTOutrage as Missouri High School Students Reportedly Come Up With Petition to Reinstate Slavery
13:42 GMTEC Does Not Expect Increase in Smartphone Prices Over Universal Charging Port Regulation
13:26 GMTAmericans Favour Trump Over Biden After Afghanistan Pullout Disaster, Poll Says
13:25 GMTComputer Game to Measure Children's Mental Development Launched by MSUPE