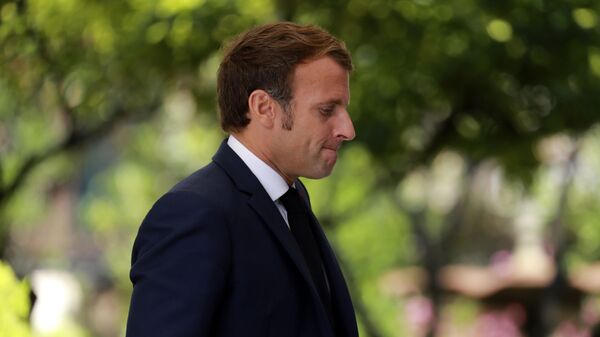 Aleksandra Serebriakova
Sputnik correspondent specializing in foreign affairs.
All materialsWrite to the author
Following a massive explosion in the port of Beirut on 4 August, French President Emmanuel Macron paid two visits to Lebanon, voicing his support for peaceful change in the country.

As a fire erupted at the Beirut port on 10 September, Twitter was flooded with memes and jokes, suggesting that French President Emmanuel Macron was preparing to jump on the next plane and visit Lebanon for the third time in a month.

Tweet: President Macron runs onto the first plane to Lebanon after seeing the port fire.

Tweet: Macron when he heard that there was fire in Beirut.

Tweet: Macron heading to Le Bourget for his private jet.

"Oh Allah, give me the patience...I'm on my way”, some memes featuring Macron said in Arabic. Others simply read as: “You can't be left alone at all?”

“Macron doesn’t see his wife because of the Lebanese. He probably forgot what she looks like”, some people joked.

Other netizens also quipped about waiting for the French president in Sudan, following massive flooding in the country.

Run, run to the plane
They can’t be left alone for a second #Lebanon 🇱🇧 MEME on #France 🇫🇷 #Macron @emmanuelmacron’s promise that a cabinet will be formed within weeks & would be comprised of "competent personalities" & would be an "independent" entity to deal w #Beirut blast pic.twitter.com/gCUUSrVUDa

Macron on his way to beirutpic.twitter.com/LT1Rc7o1BD

The meme contest started soon after a fire erupted at a Beirut port warehouse that was storing tyres and oil. The cause of the blaze is still being determined.

The same port witnessed a devastating blast on 4 August that killed at least 190 people and injured thousands more. Shortly after the explosion, French President Emmanuel Macron flew to Lebanon to pay tribute to the victims. During his visit, Macron assured the public that “France will never let Lebanon go”. Some media outlets deemed these comments inappropriate, highlighting Lebanon’s colonial past, suggesting that Macron probably “forgot that Lebanon is no longer a French protectorate”.

The French President’s next visit to the country at the start of September was marked the day before by the appointment of Mustapha Adib as Lebanon's new premier by President Michel Aoun. During his trip, Macron called for the formation of a new government and insisted that the country would be denied international aid if it fails to implement political reforms by December.