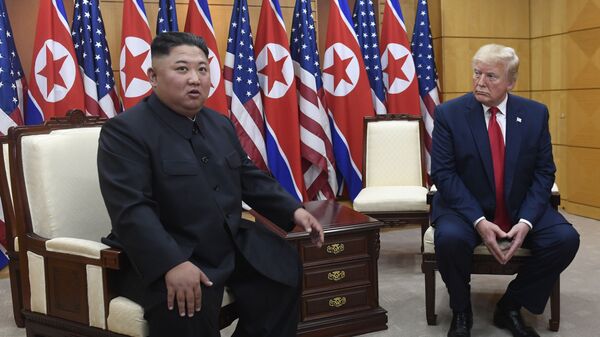 Aleksandra Serebriakova
Moscow-based Sputnik correspondent specializing in foreign affairs.
All materialsWrite to the author
The death of the North Korea leader’s uncle-in-law Jang Song-thaek made international headlines several years ago, after it was reported by several outlets outside of the DPRK that circumstances around his death were especially brutal and that nearly-all members of his family have also been killed.

North Korea’s leader Kim Jong-un once graphically described to US President Donald Trump the killing of his own uncle during one of their meetings, POTUS reportedly told Bob Woodward for his forthcoming book “Rage”, according to the Associated Press.

The memoir, which is expected to see the light next week, quotes Trump as saying that the North Korean leader tells him “everything”, including the destiny of his now-deceased relative. The publicly-released excerpts do not directly name the kinsman in question, however, Trump’s comment most probably relates to an execution of Kim’s well-known uncle Jang Song-thaek, once a powerful figure in North Korea, whose death in 2013 made an international uproar.

Jang Song-thaek was the husband of Kim’s aunt Kim Kyong-hui and vice-chairman of the National Defence Commission. He was once rumoured to have been considered as a potential successor to Kim’s father, the nation's Supreme Leader, when Kim Jong-il fell gravely ill. In 2013, Jang Song-thaek was accused of counter-revolutionary activity and treachery, and then promptly executed after the arrest. 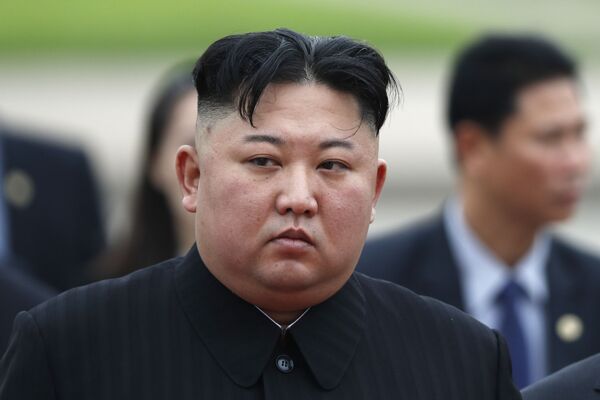 The circumstances around Jan Song-thaek's death were widely discussed in the media after it was reported by South Korea’s Yonhap News Agency, citing unnamed sources, that members of the man’s family were also all put to death, including his grandchildren and other close relatives. It was first suggested that Jang Song-thaek was executed by a firing squad, but the Chinese newspaper Wen Wei Po later argued that the former official was killed by being stripped naked and then fed to a pack of 120 dogs. His wife, Kim Kyong-hui, the aunt of North Korean leader, remained alive despite being stripped of major government posts. She has recently been seen in public alongside her powerful nephew.

What Else is in ‘Rage’

The book, which is said to be based on 18 interviews with Trump and people close to him which were conducted between December 2019 and July 2020, also describes the US president’s impressions with Kim when the two met in Singapore for the first time back in 2018, with America’s president referring to his counterpart as “far beyond smart”.

Woodward also reportedly gained access to 25 private letters Trump had exchanged with Kim throughout their acquaintance. The journalist said he was not allowed to make copies of the messages he has seen but rather had to dictate them into his tape recorder. Two of these letters have already been revealed to the public and are expected to appear in the book. 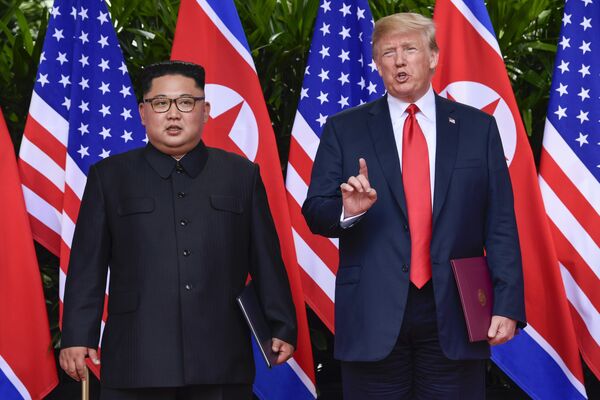 FILE - In this June 12, 2018, file photo, U.S. President Donald Trump makes a statement before saying goodbye to North Korea leader Kim Jong Un after their meetings at the Capella resort on Sentosa Island in Singapore
© AP Photo / Susan Walsh, Pool
POTUS himself once described his correspondence with DPRK’s head as “love letters”. In one Kim refers to the US commander-in-chief as “your excellency” and tells him that the "deep and special friendship between us will work as a magical force”.

In one of his interviews to Woodward, Trump also reportedly slammed critics who did not see his three meetings with the leader of North Korea as a positive event. “It takes me two days. I met. I gave up nothing,” the president said, noting that the CIA had “no idea” how to deal with DPRK and its nuclear arsenal.

Among some other statements reportedly reiterated to Woodward by Trump are the ones where the president boasted about building “a nuclear - a weapons system that nobody’s ever had in this country before” and acknowledged publicly downplaying the threat of coronavirus. According to the legendary journalist, who is now also an associate editor for The Washington Post, during preparations for his bombshell book, he was granted access to top officials inside the White House, which allowed him to witness the inner functioning of the Trump administration.