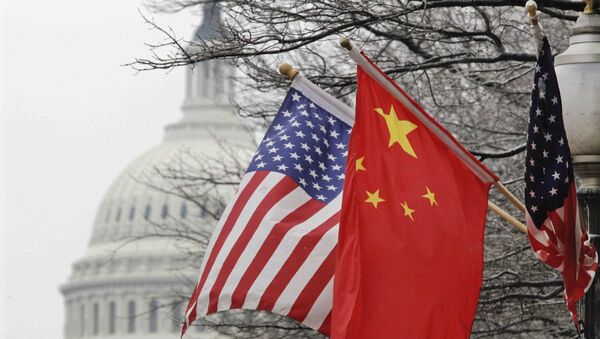 © AP Photo / Charles Dharapak
Subscribe
International
India
Africa
The US State Department revealed on Wednesday that more than 1,000 Chinese nationals have had their visas cancelled since June over "security" concerns.

China's Foreign Ministry has lashed out at the United States for its decision to revoke the visas of over 1,000 Chinese nationals, blasting the move as "racial discrimination" and "blatant political persecution".

Foreign Ministry Spokesman Zhao Lijian called the US move a violation of the human rights of the students.

Beijing has also indicated that it reserves the right to take further action in response to Washington's move.

On Wednesday, the US Department of State said in a statement that those who'd had their visas cancelled "were found to be subject to Presidential Proclamation 10043 and therefore ineligible for a visa".

The proclamation, issued by incumbent POTUS Donald Trump in May, alleges that Beijing is "engaged in a wide‑ranging and heavily resourced campaign to acquire sensitive United States technologies and intellectual property, in part to bolster the modernisation and capability of its military, the People's Liberation Army".

According to Washington, the revocation of visas "safeguards US national security by limiting the PRC's ability to leverage Chinese graduate students and researchers in the United States to steal United States technologies, intellectual property, and information to develop advanced military capabilities".

The State Department said that the "high-risk graduate students and research scholars" that had been expelled "represent a small subset of the total number of Chinese students and scholars coming to the United States".

"We continue to welcome legitimate students and scholars from China who do not further the Chinese Communist Party's goals of military dominance", the statement added.

Earlier this year, the US announced the closure of the Chinese consulate in Houston, with Secretary of State Mike Pompeo saying that the US had made this decision because Beijing was "stealing" intellectual property. He also described the diplomatic premises as a "den of spies". Beijing denied the allegations, retaliating with the shutdown of the US consulate in the south-western city of Chengdu and accusing its staff of meddling in China's internal affairs.