Lebanese President Not Ruling Out Arson in Port of Beirut 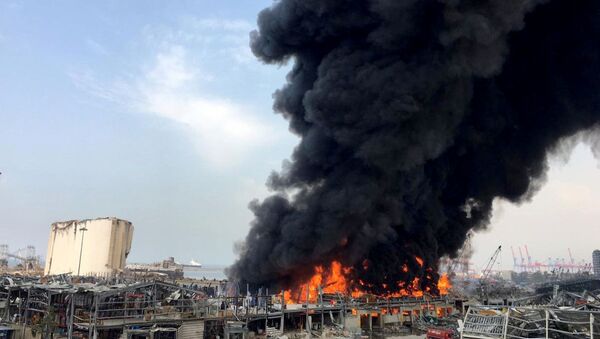 Sofia Chegodaeva
All materialsWrite to the author
The Beirut port was ripped by a deadly explosion on 4 August, causing huge damage to nearby residential areas and killing at least 190 people. Some 5,000 more were injured, while more than 300,000 were left homeless.

The fire in the customs area of the port of Beirut has now been contained and there is no risk of it spreading, the head of the Lebanese civil defence, Raymond Khattar, told the NNA broadcaster.

According to Khattar, fire brigades and civil defence teams have circled the flames.

Earlier in the day, a fire erupted at a warehouse storing tyres and oil at the Beirut port.

The warehouse is located in the duty-free zone of the port. The cause of the blaze is still unknown, a military source told Reuters.

Lebanon’s President Michel Aoun said that incidents like the massive blaze in port area are unacceptable especially after the disaster caused by explosion in Beirut month ago. Noting that the fire could be an intentional act of sabotage, or the result of a technical error, or ignorance, or negligence, the president insisted that the cause must be investigated as soon as possible and the perpetrators held accountable. Aoun also thanked the army and fire brigades for their tremendous efforts to extinguish the fire, according to the Lebanese government’s Twitter account.

A freind just sent this from Mar Mkhail and said people are leaving the area, cars reversing, people running.

It’s coming from Beirut’s port, looks like a massive fire. There was a fire at the port two days ago that also caused panic. It was extinguished. pic.twitter.com/ZBq8itgPIU

Local residents took to Twitter to say how frightened they were to see the fire, remembering the tragedy that happened last month.​

Insane fire at the port, causing a panic all across #Beirut. We just can’t catch a break. pic.twitter.com/PtdHehPlz0

The Lebanese army used helicopters to extinguish the fire. They also warned that the use of drones was prohibited in the port area since aviation was involved in putting out the fire.

According to the country's Red Cross chief, there is no danger of any explosion resulting from the port's fire, and nobody has been killed or seriously injured, although some cases of people facing shortness of breath have been reported. 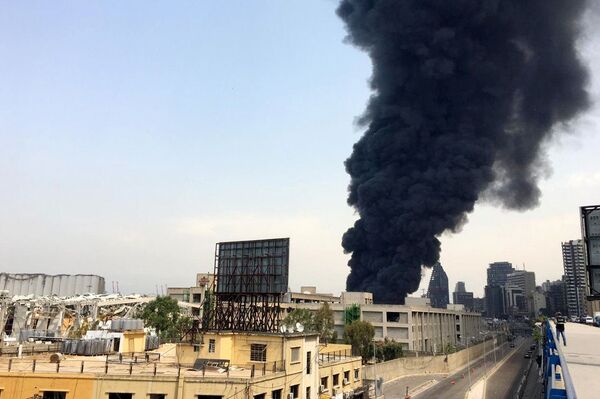 On 4 August, the port of Beirut was hit by a huge explosion, which the authorities blamed on the improper storage of 2,750 tonnes of ammonium nitrate. The blast caused an estimated $15 billion in damages and prompted the country's government to resign.