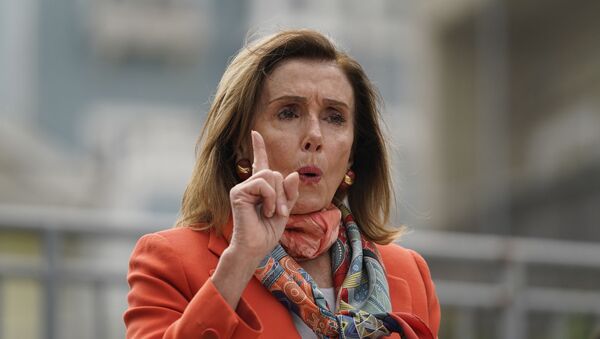 Daria Bedenko
All materialsWrite to the author
The Good Friday agreement was signed in April 1998, marking the end of the period in Northern Ireland's history known as "The Troubles". The 30-year-long conflict between the pro-Irish republicans and the pro-British loyalists claimed over 3,500 lives.

US House Speaker Nancy Pelosi released a statement Wednesday, stressing on the importance of Northern Ireland's Good Friday accord and outlining that "Brexit cannot be allowed to imperil the Good Friday Agreement".

“If the UK violates that international treaty and Brexit undermines the Good Friday accord, there will be absolutely no chance of a US-UK trade agreement passing the Congress", Pelosi stated. "The Good Friday Agreement is treasured by the American people and will be proudly defended in the United States Congress.”

Pelosi went on to stress that the UK "must respect the Northern Ireland Protocol as signed with the EU to ensure the free flow of goods across the border".

Her statement comes after the UK revealed a new Internal Market Bill that has met harsh criticism over its possible violation of international law, particularly the recently signed Brexit Withdrawal Agreement. The legislation was slammed as "full frontal assault on devolution”, with the Welsh government accusing Johnson of  “stealing powers” from the administrations in Wales, Scotland and Northern Ireland.

The new bill describes how the trade powers, currently held by the European Union, will be shared out from 1 January 2021. The critics expressed concerns that it might particularly lead to potential creation of hard border - something that would not comply with the Good Friday Agreement.

Under the current deal with Brussels, Northern Ireland was agreed to remain subject to customs agreements and single market rules.

The UK's Northern Ireland secretary, Brandon Lewis, admitted earlier that the reinterpretation of the Brexit arrangements "does break international law in a very specific and limited way", asserting, however, that the UK position comes from the need to "consider their international obligations as circumstances change".

The United Kingdom formally left the European Union on 31 December, but will remain a part of the single market until the end of the transition period scheduled for 1 January 2021.

After the UK exited the EU, it started trade negotiations with several nations, including the US. The talks on a future Free Trade Agreement (FTA) between the two countries are ongoing, with the fourth round of them set to begin in early September.

Andreas Bieler, professor of political economy at the School of Politics and International Relations at the University of Nottingham, believes that the UK government has moved "onto thin ice" after it threatened to override the Brexit deal with the EU.

"Not only has it [the UK government] undermined trust with EU negotiators at a crucial moment of the UK-EU free trade negotiations, it has also put doubts on the extent to which the UK can be relied upon in international agreements more generally. How can potential future trade partners be confident that the UK will not simply break agreements, when they do not suit the country anymore? Equally dangerous are the potential implications for peace in Ireland. Is the UK government really willing to risk a hard border between Northern Ireland and the Republic of Ireland and, thereby, threaten the Good Friday Agreement? Latest government announcements may go down well with Brexiteers in the Conservative Party, but they put in question the reliability of the UK’s general foreign policy."