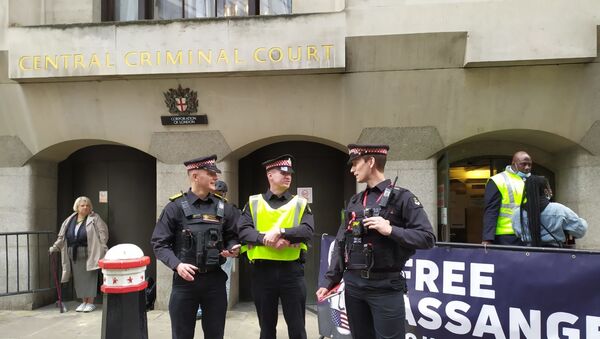 Assange is currently attending a hearing on whether he should be extradited to the United States, which resumed on Monday at the London Central Criminal Court, after six months of delay due to the COVID-19 pandemic.

Wednesday marks the third day of the Julian Assange extradition hearings, which continue at the Old Bailey Central Criminal Court in London.

The WikiLeaks founder, who has been held in the maximum-security prison Belmarsh since his arrest at the Ecuadoran embassy in London in April 2019, is attending the trial from behind a glass panel, away from his defence team.

"One of the techniques of the prosecution that is constantly used is to pick on “a document” among 1200 pages of documentation that the witnesses have been given and then berate the witnesses for not knowing exactly what is in it or not having addressed that particular point in the evidence, which, of course, is quite unreasonable. But [it is] absolutely unreasonable to expect every witness to know every detail of every document. But today Mr Tim  [Hayward] did know every detail of every document which [has] rather flummoxed the prosecution. He also dealt very well of the point because the point the prosecution continually makes is to say that: "if this is a politically motivated prosecution and if it is not looking at genuine crime, does that mean that the prosecutors personally are corrupt or are lying in saying that this has been brought for the right reasons?"", Craig Murray said.

'He Did Nothing Wrong': Commentator Says Full Acquittal is Most Morally Correct Outcome For Assange
12:59 GMT 09.09.2020

Cars, vans and motorcycles honk their horns showing apparent solidarity with #JulianAssange and his supporters around the Old Bailey in central London. pic.twitter.com/TACzj4agHO

Rebecca Vincent (@rebecca_vincent) of Reporters Without Borders explains the difficulty of her & her colleague in gaining access to the court to observe the hearings despite the apparently large number of free seats in the public gallery.#JulianAssange

John Shipton - #JulianAssange's father - arrives on his birthday to observe the third day of his son's substantive extradition hearings.

Sputnik: What are you expecting from the court proceedings today?

John Shipton: Today, further witnesses will be called for the defense. Yesterday we had Clive Stafford Smith from Reprieve who outlined the public benefit of the WikiLeaks cables releases, particularly over the matter of torture, (such as) when a United Kingdom prisoner of the United States had his genitals cut with razor blades; all of that was in evidence yesterday. Also in evidence was the professor of journalism at US Maryland University, Mark Feldstein, who gave evidence in the afternoon. All of this evidence the court guillotined after 30 minutes and allowed 3 hours for the prosecution to cross-examine. Clearly, the government doesn’t want evidence of United Kingdom citizens undergoing torture by the United States to the extent of having their genitals cut with razorblades.

Sputnik: Do you know what witnesses will be speaking today?

John Shipton: It’s on the court list, but it’s better if we hear what they’ve got to say before we chat to you.

Professor Paul Rogers, emeritus professor of Peace Studies at Bradford University, is now giving testimony having submitted a report to the court. He is a political scientist specialising in international security.

Prof Rogers has concluded that Assange has very clear political opinions - and the clash of those views and successive US admin, especially the current one - suggest that he is regarded primarily as a political opponent who must experience the full wrath of government.

Court is expected to sit from 10:30 am rather than 10am to offer #Assange the opportunity to meet with his lawyers due to the defence team's inability to access their client after the end of each day.