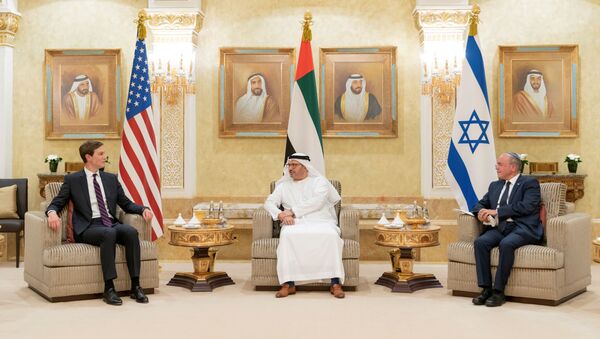 WASHINGTON (Sputnik) - The US administration is contemplating a sale of F-35 fifth generation jet fighters to the United Arab Emirates (UAE), but will discuss a possible deal with Israel to accommodate its security concerns, senior White House adviser Jared Kushner told reporters on Wednesday.

"Right now it’s something that is being discussed," Kushner said during a press briefing. "That’s something that we are discussing very seriously. And we will see what happens as we go to consultations with the Israelis, Congress and other partners."

The prospects of a groundbreaking arms deal opened up after the US brokered a peace agreement between two of its major allies in the Middle East. The UAE becomes the third Arab country to normalize relations with Israel after Egypt in 1979 and Jordan in 1994.

When the peace deal was announced, President Donald Trump said that the UAE would like to buy F-35s and the US was reviewing the possibility of selling the aircraft. Israel, the only operator of the F-35 in the Middle East, has been pressing Washington to maintain its qualitative military edge in the region, and the news caused an outcry among its establishment and the press.

Kushner said the US administration would do what it can "to make sure that we accommodate that circumstance."

"President Trump has shown that he understands Israel’s security better than any American President in decades, he has been a great friend of Israel, he has made the region safer, he has brought America and Israel closer that they had ever been before," he added.

The signing of a peace deal between Israel and the UAE is scheduled for 15 September in Washington.