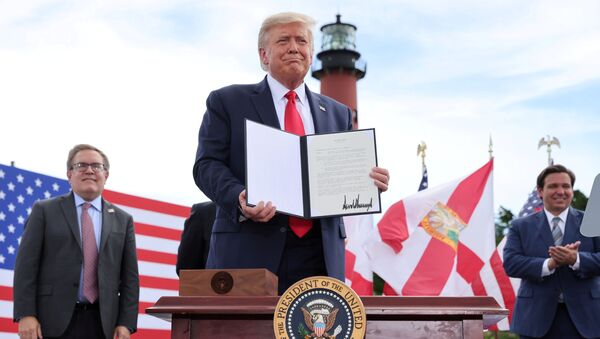 WASHINGTON (Sputnik) - US President Donald Trump on Tuesday signed an executive order to extend a moratorium on offshore drilling in Florida's Gulf coast and to expand a temporary drilling ban into the state's Atlantic coast.

“In a few moments I will sign a presidential order extending the moratorium on offshore drilling on Florida’s gulf coast and expanding it to Florida’s Atlantic coast as well as the coasts of Georgia and South Carolina,” Trump said. “Thanks to my administration’s pro-American energy policies we can take this step and the next step while remaining the No. 1 producer of oil and natural gas anywhere in the world”.

Trump said in a copy of the presidential memorandum that the existing moratorium will be extended for another 10 years starting 1 July 2022.

Democratic presidential nominee Joe Biden weighed in on Trump's executive order, describing it as a fair-weather decision made in light of the US election. Biden emphasized that he also opposes new offshore drilling.

In a statement ahead of Trump's speech, the former vice president slammed the president's environmental record, saying that Trump "has eliminated rules" that protect the nation's environment and has provided "additional public lands, both on land and offshore" for new oil and gas drilling exploration and extraction.

“Trump has called the climate crisis a ‘hoax,’" Biden said, quoted by The Hill, adding, "He has eliminated rules designed to keep our air and water clean. And, dangerously, he has opened up additional public lands, both on land and offshore, to the possibility of new oil and gas drilling. As president, I will work with experts to fight COVID-19, make historic investments to create millions of clean energy jobs, and get our economy back on track so it works for all Americans, not just Trump’s Mar-a-Lago crowd”.

The Trump administration, which has been keen on rolling back federal regulations for US energy companies, had promised energy industry executives new zones would be opened for offshore drilling.

In 2010, following the ecologically disastrous Deepwater Horizon spill, which occurred in the Gulf of Mexico, the administration of former US President Barack Obama issued a moratorium on all new deepwater offshore drilling.