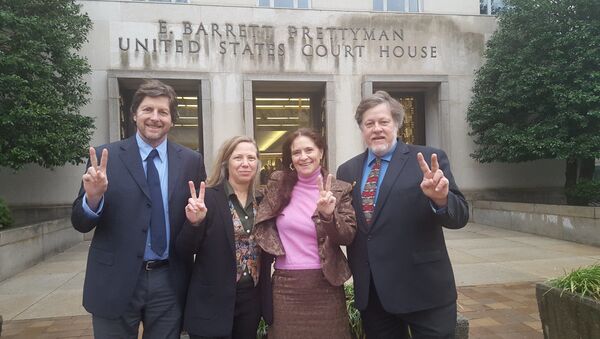 WASHINGTON (Sputnik) - Distinguished US activist Kevin Zeese, who most recently helped protect the Venezuelan Embassy in Washington, DC, has died from a heart attack at that the age of 64, the United National Antiwar Coalition (UNAC) said in a statement.

"Kevin Zeese, co-director of Popular Resistance, passed away early in the morning of September 6, 2020," the statement said on Tuesday. "Kevin was an active member of the UNAC Administrative Committee, playing critical roles in numerous actions including our conference this spring, and collaborations like the No Foreign Bases Coalition, the Hands Off Syria Coalition, the Sanctions Kill Coalition and others."

Last year, Zeese helped start and lead the Embassy Protection Collection, which protected the Venezuelan Embassy in Washington, DC after the US government forced the Venezuelan ambassador and embassy staff to leave in order to clear the path for self-proclaimed interim President Juan Guaido's envoy to the United States.

Venezuelan Foreign Minister Jorge Arreaza in a separate statement expressed condolences to Zeese's family and remembered his efforts defending the Venezuelan embassy by describing him as a brave peace activist and human rights defender.

Zeese was a public interest lawyer and had also served as press secretary for Ralph Nader's 2004 presidential campaign. In 2006, Zeese was the Green Party candidate in a run for US Senate in the state of Maryland.