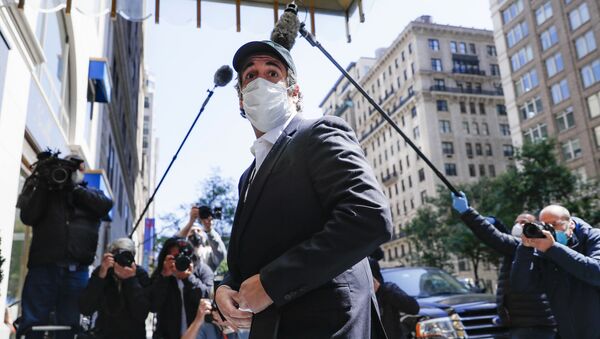 Jason Dunn
All materialsWrite to the author
Disbarred attorney and former legal confidante to US President Donald Trump, Michael Cohen, serving 3 years in prison after pleading guilty to tax evasion and campaign finance violation, has written a book on his time with Trump during the latter's campaign and administration.

Donald Trump's former personal attorney claims, in a new book released on Tuesday, that endorsement by the former Liberty University president, Jerry Falwell Jr., of the president was due to Cohen preventing explicit photos of Falwell from going public.

Cohen said in a recording released last year by comedian Tom Arnold that the Falwells earlier sought aid in stopping “a bunch of photographs, personal photographs” from being posted online.

“I actually have one of the photos, it’s terrible”, Cohen said in the recording.

In his new tell-all book, 'Disloyal', Cohen says the incident was similar to the “catch and kill” schemes he conducted to bury unwanted information, Reuters reported.

While not explicitly saying that the endorsement was quid pro quo for his success in keeping the photos from going public, Cohen "called Becki and reassured her that the pictures wouldn't get out, but I could hear the fear and sadness in her voice. I reassured her I wouldn't let her down, and I didn't".

"There it was: my second chit with the Falwells", he writes. "In good time, I would call in this favour, not for me, but for the Boss [Trump], at a crucial moment on his journey to the presidency".

Trump's 2016 Republican presidential primary was boosted by Falwell's endorsement, due to its favorability among the American white evangelical Christian demographic, a voter bloc that primary opponent Senator Ted Cruz was desperate to capture.

'Disloyal' outlines the relationship between Cohen and the Falwells back to 2011, with the former Trump associate describing them as “dear friends, more like family to me”.

However, he writes that the relationship was based on exchange, citing the securing of Justin Bieber tickets for Falwell's daughter, explaining that the tickets and the sexually explicit photos were similarly transactional.

“Like the Bieber favor a few years earlier, this would have a huge impact on the 2016 election, evangelicals, the Supreme Court and the fate of the nation”, he wrote. “If Becki Falwell was seen half-naked by the students of Liberty University, let alone evangelicals all over the country, it would be an unmitigated disaster”.

Cohen claimed earlier this year, however, that there was "absolutely no connection between the photos and my personal request to the Falwells to assist the Trump campaign".

Jerry Falwell Jr. contradicted Cohen's report, telling Reuters on Tuesday that his endorsement of Trump was not related to the former lawyer's role in suppressing the images.

This follows Falwell's resignation from his position as president of Liberty University in August - a school founded by his notorious preacher father, Jerry Falwell - following a scandal involving business associate Giancarlo Granda, revealing he had an affair with Falwell’s wife Becki Falwell, that included the knowledge of her husband.

Falwell denied his involvement, saying that he found out after his wife had ended their relationship.