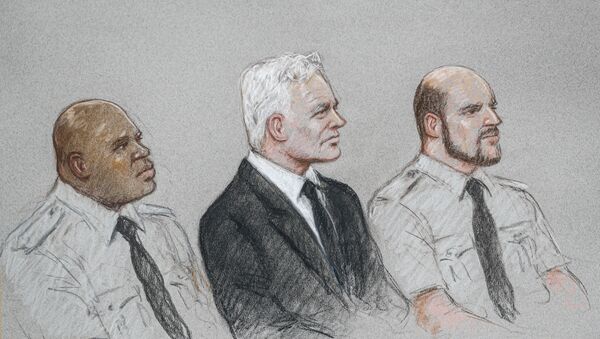 © REUTERS / Julia Quenzler
Subscribe
Svetlana Ekimenko
All materialsWrite to the author
The hearing into the extradition case of WikiLeaks whistleblower Julian Assange, who faces a possible maximum sentence of 175 years in prison in the US for criminal charges related to endangering national security by conspiring to obtain and disclose classified information, resumed in the UK on Monday.

Julian Assange was admonished by a judge during the second day of his extradition hearing in London after an outburst by the whistleblower, reported The Guardian.

Assange had interjected a response amid a verbal sparring bout that involved a lawyer for the US authorities and a high-profile witness giving evidence in support of the WikiLeaks founder.

Clive Stafford-Smith, founder of the legal charity Reprieve, had said documents published by WikiLeaks had shed light on “grave violations of law”, like the use of US drones to carry out targeted strikes in Pakistan.

The witness, questioned by James Lewis QC, acting for the US authorities, was told, however, that Assange was not being prosecuted for the leaked cables which he had cited. 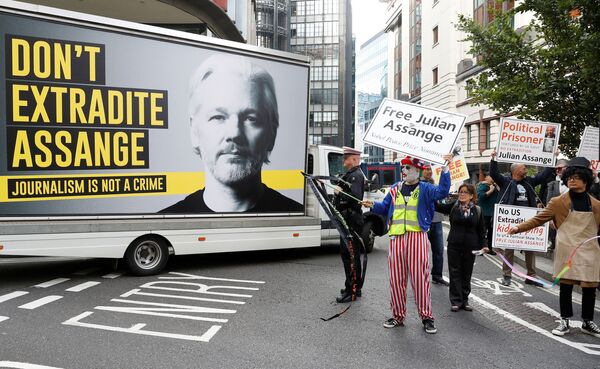 Supporters of WikiLeaks founder Julian Assange are seen outside the Old Bailey, the Central Criminal Court ahead of a hearing to decide whether Assange should be extradited to the United States, in London, Britain September 7, 2020. REUTERS/Peter Nicholls
© REUTERS / Peter Nicholls

The US charges ostensibly related to the publication of the names of informants in Iraq and Afghanistan, accordingly endangering their lives.

“You cannot tell this court how this case will be prosecuted, you’re making things up,” said Lewis.

Stafford-Smith was quoted as replying:

“I can tell you how American cases are prosecuted.”

Judge Vanessa Baraitser adjourned the hearing for 10 minutes after an alleged attempt by Julian Assange to interject.

While the comments could not be heard by journalists following proceedings on a videolink, witnesses inside the courtroom are reported as claiming the whistleblower said “this is nonsense” in reference to the arguments presented by the lawyer for the US authorities.

The judge was cited as warning Assange would be removed from the court and tried in his absence if he attempted to speak out again.

“I understand you’ll hear things you disagree with … and you’d like to contradict and speak about these things yourself, but this is not your opportunity to do so,” the Judge was quoted as saying.

The events played out on the second day of a four-week hearing at the Old Bailey, London.

Assange spent seven years in the Ecuadorian Embassy in London after skipping bail and asking for political asylum in 2012 to evade possible extradition to the US.

In 2019 the whistleblower was forced out of the embassy before being sent to the Belmarsh Prison in London pending an extradition trial.