At Least 37 Million People Displaced by US War on Terror, Study Finds 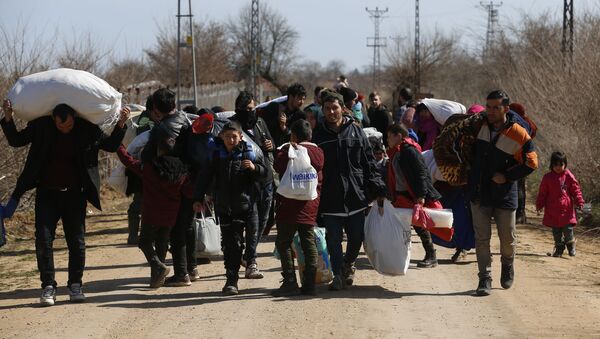 A new report by the Costs of War Project has found that at least 37 million people have been displaced by the US War on Terror; however, the group warns that the estimate is conservative and the real total could be far higher.

According to a report published on Tuesday by the Costs of War Project at Brown University’s Watson Institute of International and Public Affairs, at least 37 million people have been displaced, either internally or been forced to become refugees, in eight different countries as a result of the US War on Terror, begun in 2001.

For comparison, the population of the US state of California is 39.5 million, and the population of Canada is 37.59 million. However, the researchers warn that is a “very conservative” estimate, as the true number could be closer to between 48 and 59 million people.

The report focused on eight conflicts, including declared and undeclared war zones, where the US has carried out military operations under the guise of destroying international terrorism: Afghanistan, Pakistan, Iraq, Syria, Libya, Yemen, Somalia and the Philippines.

The group’s data was compiled from the United Nations High Commissioner for Refugees (UNHCR), the Internal Displacement Monitoring Center (IDMC), the International Organization for Migration (IOM) and the UN Office for the Coordination of Humanitarian Affairs (OCHA).

In Afghanistan, some 5.3 million people have been displaced in total since 2001, although this number is in considerable dispute, as the researchers concluded that 2.1 million Afghans had fled the country since 2001, but they also found evidence that as many as 2.4 million had fled just between 2012 and 2019. Another 3.2 million have been displaced internally. The researchers noted, however, that war and civil turmoil in the Central Asian country has continued almost nonstop since the late 1970s.

In neighboring Pakistan, the US war near the Afghan border has displaced some 3.7 million people, including 360,000 refugees abroad and 1.56 million from the border area.

Meanwhile in Libya, where the US supported the 2011 overthrow of longtime leader Muammar Gaddafi, at least 1.2 million people have been displaced in what the IDMC called a “state collapse trigger[ed] mass displacement.” At the start of 2020, the report notes, 451,000 remained internally displaced, and the civil war continues to rage.

Iraq has the largest total number, with 9.2 million people displaced by several wars. In March 2003, the US launched a massive invasion of Iraq to overthrow Saddam Hussein, and the brutal counterinsurgency war that erupted afterward had displaced some 4.7 million people by 2007. While the US war in Iraq officially ended in 2011, war erupted again just three years later in 2014, when Daesh roared into existence, and the US once again became involved in major combat operations in Mesopotamia. By 2020, 650,000 Iraqis remained refugees abroad, and 1.4 million had been internally displaced.

In neighboring Syria, where Daesh first established its would-be caliphate amid a civil war raging since 2011, the US became involved at several distinct levels over the years. The report was very truncated in its analysis, looking just at the five provinces where US forces fought on the ground - Aleppo, al-Hasakah, al-Raqqa, Deir ez-Zor and Homs - and only since 2017.

By those criteria, 7.1 million had been displaced, including 470,000 internally. However, 220,000 of those have been just since October 2019, when the Turkish invasion of eastern Syria pushed 220,000 Kurds from their homes, including 17,900 who crossed the border into Iraq for safety.

However, the report notes that if a different metric were used - one including all of Syria beginning in 2013, when the US started arming Syrian rebel militias - the number of displaced persons increases massively to between 44 and 51 million people.

In Somalia, where the US has waged or supported wars for decades, “virtually all Somalis have been displaced by violence at least once in their life,” the Norwegian Refugee Council is quoted as saying in the report. From a population of 15 million, some 4.2 million have been displaced by US operations, including 80,000 refugees and 3.4 million internally displaced persons.

Like Somalia, Yemen has seen war rage for decades. The US began airstrikes in Yemen in 2002, pursuing al-Qaeda in the Arabian Peninsula, but conditions deteriorated catastrophically in 2015, when Saudi Arabia and several of its allies, including the US, launched a war against the Yemeni Houthi movement.

The ongoing war, in which Saudi, Emirati and Moroccan aircraft have bombarded the country and supported militias on the ground as well as forces loyal to ousted Yemeni President Abdrabbuh Mansur Hadi, has displaced 4.4 million people. In 2019 alone, 400,000 more people were displaced. According to the OCHA, 100,000 Yemenis have been killed by combat operations since 2015, and another 130,000 have died from hunger and disease.

The Philippines is the only country on the list not located in southwestern Asia or northern or eastern Africa. However, the US-supported military operations in Mindanao against groups such as the Moro Islamic Liberation Front, Abu Sayyaf and the Maute Group have displaced some 1.7 million Filipinos, nearly all of them internally.

“In documenting displacement caused by the US post-9/11 wars, we are not suggesting the US government or the United States as a country is solely responsible for the displacement. Causation is never so simple,” the authors note in the report. “Causation always involves a multiplicity of combatants and other powerful actors, centuries of history, and large-scale political, economic, and social forces. Even in the simplest of cases, conditions of pre-existing poverty, environmental change, prior wars, and other forms of violence shape who is displaced and who is not.”