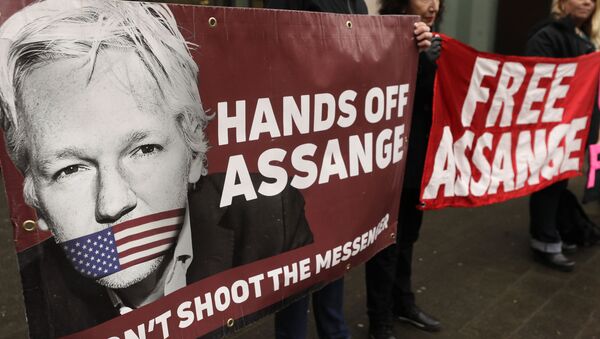 LONDON (Sputnik) - Clive Stafford-Smith, the first witness called to testify by Julian Assange's legal team on the second day of the extradition hearing, highlighted on Tuesday the usefulness of Wikileaks’s releases, claiming that the leaked information has allowed him to win legal cases in court.

Stafford-Smith, a British-American lawyer running an organization called Reprieve, which deals with cases involving rendition, secret detention, torture and the death penalty, said, for example, that he used the classified files on US drone killings in Pakistan published by Wikileaks to take legal action in court and have them stopped.

"An example of the way that Wikileaks documents have enabled us at Reprieve to evidence grave violations that we may otherwise have struggled with, involves our work on drone killings in Pakistan," he said in a written statement, released by WikiLeaks.

According to the witness, the leaked cables "have contributed to court findings that US drone strikes are criminal offences and that criminal proceedings should be initiated against senior US officials involved in such strikes."

When asked by Assange’s lawyer, Mark Summers, about the role of WikiLeaks in exposing torture techniques being used at the US detention facility in Guantanamo Bay, the witness said one of the documents revealed an enhanced interrogation technique that included hanging people by their arms while their shoulders slowly dislocated.

Stafford-Smith was the first witness called by the defence on the second day of Assange’s extradition hearing to the United States.

During the cross-examination, the US prosecutors claimed that the whistleblower is not being prosecuted by the US for the publication of such documents, but that he is being charged for revealing names of informants in Iraq and Afghanistan, hence, putting their lives at risk.

If Assange is not being prosecuted because of these releases, it is not clear, how this is relevant, the witness replied.

The US Department of Justice is seeking to extradite the Wikileaks founder on 18 espionage and computer misuse charges, which carries a sentence as long as 175 years in prison.

Although no new charges were added, the US presented in August a new superseding indictment to accuse Assange of conspiring with US army intelligence analyst Chelsea Manning to access a Department of Defence computer containing secret diplomatic cables and military information on the US troops in Iraq and Afghanistan.

The hearing to decide whether Assange should be extradited to the United States resumed on Monday at the London Central Criminal Court, after six months of delay due to the COVID-19 pandemic.

The Wikileaks founder, who has been locked at the maximum-security prison of Belmarsh since his arrest at the Ecuadoran embassy in London in April 2019, is attending the trial from behind a glass panel, away from his defence team.