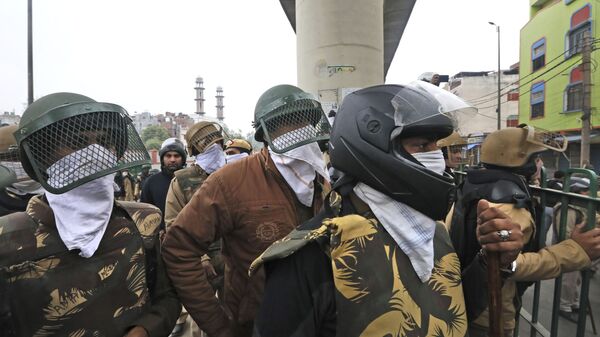 Shweta Sharma
Sputnik correspondent
All materialsWrite to the author
One of the most prominent and oldest groups seeking an independent Sikh country in India, Babbar Khalsa International (BKI), is a banned international terrorist organisation working in the UK, US, Canada, and Germany. The US has also raised concerns over the terror group posing a risk to American interests by conducting assassinations and bombings.

Two terrorists from a banned terror group, Babbar Khalsa International (BKI), were arrested in Delhi after a shootout on Monday. A large amount of ammunition was also recovered from the terrorists, identified as Bhupender alias Dilawar Singh and Kulwant Singh, confirmed Delhi Police Special Cell.

“Six pistols and 40 cartridges have been recovered from their (terrorists’) possession", the Special Cell said. The two were also wanted in some other cases in Punjab.

In August, India's anti-terror court sentenced a Babbar Khalsa militant and nine others smugglers to life in prison for possessing and buying arms and ammunition for the terror outfit from Pakistan in 2009.

After India raised the issue of separatist Sikhs using the United States as a platform to gain global traction and carry out anti-India activities, the White House in 2018 condemned such groups saying they are a threat to the US as well.

"Such groups may avoid or deprioritise targeting United States interests for now to avoid detracting from their core goals but frequently conduct assassinations and bombings against major economic, political, and social targets, heightening the risk to United States personnel and interests overseas", said the Trump administration in a new national strategy for counter-terrorism.

The Khalistan movement in the Indian state of Punjab is led by secessionists who demand a separate sovereign state, "Khalistan", for the Sikh religious minority community.