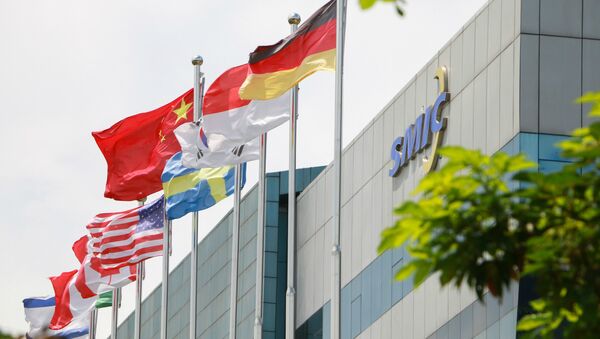 Demond Cureton
All materialsWrite to the author
The news comes amid a spike in tensions in the ongoing trade war between Washington and Beijing, with the latest measures aiming to block the Shanghai-based firm from access to US technologies used to test and manufacture semiconductors.

On Monday, shares for the Chinese chipmaker collapsed 20 percent on the Hong Kong Stock Exchange and 10 percent on the Shanghai Science and Technology Innovation Board, wiping out over $5bn in value, the Financial Times reported on Monday.

But the Chinese semiconductor company said on WeChat that it strictly follows the laws and regulations of relevant nations as it had maintained cooperative relations with global chipmaking equipment suppliers for years.

“Any assumptions of the company’s ties with the Chinese military are untrue statements and false accusations. The Company is in complete shock and perplexity to the news. Nevertheless, SMIC is open to sincere and transparent communication with the US Government agencies in hope of resolving potential misunderstandings," SMIC said in a statement.

The US Department of Defense is mulling whether to add SMIC to an Entity List along with Huawei, ZTE and over 70 Chinese tech firms, barring the companies from doing business with US firms without a licence, according to the Wall Street Journal.

The latest measures could block Huawei from accessing chipsets, dealing a further blow to the Shenzhen-based tech giant after passing further restrictions on semiconductor technologies in August and extending the Entity List in May a second year.

China launched plans this month to boost the mainland chipmaker and others in a bid to distance from US technologies, with the additional funds set to be included in a draft of the Chinese Communist Party's 14th Five-Year Plan in October.

000000
Popular comments
No problem. Us is sinking. A dead country.

Barros
7 September 2020, 20:25 GMT6
000000
Trump acting suicidal: in a couple of years the Chinese will have caught up with US tech and be independent of it. That means scores of US tech companies that make their profit in the Chinese market will falter and the entire semiconductor industry will move to China. Trumps frenzy to beat Xi will cost the US dearly. Time for another president. Except that the Dems produced the absolutely weakest candidate imaginable and no intelligent person can vote for Biden.
Regula
7 September 2020, 19:48 GMT5
000000
Newsfeed
0
New firstOld first
loader
LIVE
Заголовок открываемого материала
Access to the chat has been blocked for violating the rules . You will be able to participate again through:∞. If you do not agree with the blocking, please use the feedback form
The discussion is closed. You can participate in the discussion within 24 hours after the publication of the article.
To participate in the discussion
log in or register
loader
Chats
Заголовок открываемого материала
Worldwide
InternationalEnglishEnglishMundoEspañolSpanish
Europe
DeutschlandDeutschGermanFranceFrançaisFrenchΕλλάδαΕλληνικάGreekItaliaItalianoItalianČeská republikaČeštinaCzechPolskaPolskiPolishСрбиjаСрпскиSerbianLatvijaLatviešuLatvianLietuvaLietuviųLithuanianMoldovaMoldoveneascăMoldavianБеларусьБеларускiBelarusian
Transcaucasia
ԱրմենիաՀայերենArmenianАҧсныАҧсышәалаAbkhazХуссар ИрыстонИронауОssetianსაქართველოქართულიGeorgianAzərbaycanАzərbaycancaAzerbaijani
Middle East
Sputnik عربيArabicArabicTürkiyeTürkçeTurkishSputnik ایرانPersianPersianSputnik افغانستانDariDari
Central Asia
ҚазақстанҚазақ тіліKazakhКыргызстанКыргызчаKyrgyzOʻzbekistonЎзбекчаUzbekТоҷикистонТоҷикӣTajik
East & Southeast Asia
Việt NamTiếng ViệtVietnamese日本日本語Japanese俄罗斯卫星通讯社中文（简体）Chinese (simplified)俄罗斯卫星通讯社中文（繁体）Chinese (traditional)
South America
BrasilPortuguêsPortuguese
NewsfeedBreaking
16:11 GMTResignation of US Special Envoy for Haiti Over Deportations 'Mischaracterised', State Dept. Suggests
15:44 GMTUS Health Official Wants to 'Blow-Dart' COVID Vax Into Black People in New Project Veritas Video
15:25 GMTTaliban Plans to Form Commission in 2022 to Draft New Constitution
15:22 GMTWatch Fuego Volcano Erupt in Guatemala, Spewing Out Vast Amounts of Smoke and Lava
15:17 GMTRussian Officials Assess Proposal to Populate Siberia With 'Resurrected' Woolly Mammoths
15:13 GMTParis to Bill Canberra for Cancellation of Submarine Deal After AUKUS Pact
14:51 GMT'Britney VS Spears': Pop Star's Fiancé Accuses Docu Makers of Earning Profit From Her Story
14:41 GMTRussian Union of Journalists Chief Slams 'Unacceptable' US Sanctions Against Colleagues
14:31 GMTUS Investment Firm Purchases Italy's Oldest Football Team
14:29 GMTUS to Find Ways to Get More Help to Haitian Migrants After US Envoy Resigned, State Dept. Says
14:25 GMTAnthony Joshua Says He Would ‘Fight King Kong' if He Had to as He Defends Titles Against Usyk
14:18 GMTFormer Nazi Helmut Oberlander Dies in Canada Before He Could Be Deported, Reports Say
14:07 GMTWhat's Behind Africa's Increasing Drive to Launch Satellites?
14:06 GMTExpo 2020 in Dubai Set to Boost Economic Development in Arab World, Organiser Says
13:58 GMTTwo Afghan Evacuees Charged With Sexual, Physical Assault in US, Justice Department Says
13:51 GMTBritish Government Preparing for 'Worst-Case Scenario' of Gas Prices, Says MP
13:43 GMTOutrage as Missouri High School Students Reportedly Come Up With Petition to Reinstate Slavery
13:42 GMTEC Does Not Expect Increase in Smartphone Prices Over Universal Charging Port Regulation
13:26 GMTAmericans Favour Trump Over Biden After Afghanistan Pullout Disaster, Poll Says
13:25 GMTComputer Game to Measure Children's Mental Development Launched by MSUPE