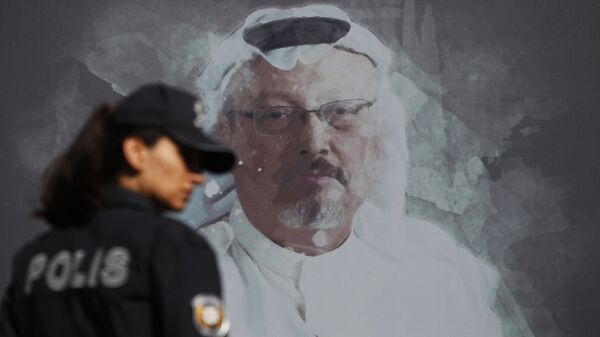 Irina Acheeva
correspondent
All materialsWrite to the author
The final ruling against the defendants in journalist Jamal Khashoggi’s case has been issued, Al Arabiya reported, citing the Saudi Public Prosecution.

A Saudi Criminal Court has convicted eight people charged in the murder of Washington Post columnist Jamal Khashoggi, a spokesperson for the Public Prosecution’s office said, as quoted by the official Saudi Press Agency.

According to the prosecution, five have been given 20-year sentences, while three others were given sentences ranging between 7 and 10 years.

These are the final sentences that are subject to immediate execution, the prosecution said, adding that the criminal case was now closed.

Saudi journalist Jamal Khashoggi disappeared in October 2018 after entering the Saudi Consulate in Istanbul, Turkey. Riyadh initially rejected any awareness of the journalist's whereabouts but finally acknowledged that the journalist was murdered and dismembered inside the embassy. The Saudi monarchy has strongly rejected allegations that they played a role in Khashoggi's death, saying that he was killed in a rogue operation.

In late October 2019, the Saudi authorities stated they had arrested 18 suspects in connection with the murder but didn't share their names.

In December, a Saudi court convicted five suspects in Khashoggi’s killing to death and imprisoned another three for a total of 24 years in a trial. Turkey and international human rights groups have slammed the ruling of a Saudi court in the trial over Khashoggi's murder.

Under Islamic law, death sentences in Saudi Arabia can be commuted if the victim's family pardons the perpetrator. However, the country's authorities have made no official comment on the matter yet.