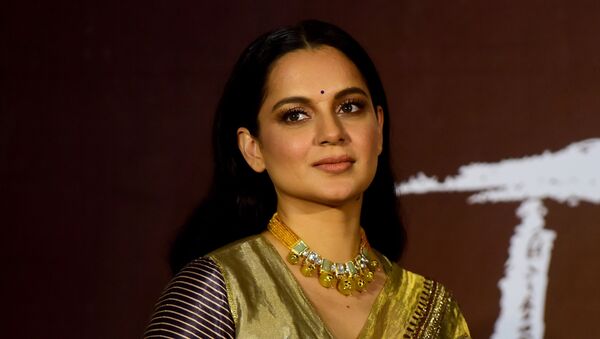 Pratibha Sharma
Sputnik correspondent
All materialsWrite to the author
After stirring up a controversy for calling out Bollywood's "rampant drug culture", actress Kangana Ranaut has now sparked an altercation with Maharashtra's ruling party, Shiv Sena, which she claims, is daring her to return to the film city Mumbai.

National award-winning Bollywood actress Kangana Ranaut will receive elite security cover (known as Y-plus) after her sister and father approached the Narendra Modi-led government demanding the same. The Y-plus plus category entails a security cover of 11 personnel and is given to VIPs in the country.

Kangana thanked Indian Home Minister Amit Shah for providing her with the security and upholding the dignity of a "daughter of India".

​The actress is embroiled in a war of words with Shiv Sena parliamentarian Sanjay Raut over a recent remark in which she expressed her distrust towards Mumbai police in providing security to her. She later compared Mumbai to Pakistan-administered Kashmir. Mumbai police are under the jurisdiction of the state of Maharashtra which is currently governed by Shiv Sena.

The 33-year-old Bollywood diva has claimed that she received a "direct threat" from Raut, who is daring her to return to Mumbai. Therefore, she has requested security cover from the Himachal Pradesh government or the federal government.

Lashing out at Raut, Kangana said that she would return to Mumbai on 9 September. In an official video put out on Instagram, the actress slammed the parliamentarian, saying that he is not the representative for all of Maharashtra.

The "Queen" actress sparked a controversy after she alleged that Bollywood biggies such as Ranveer Singh, Ranbir Kapoor, and Vicky Kaushal were being labelled as "cocaine addicts" and called upon them to take a drug test.

​Earlier, the Bollywood actress accused filmmaker Karan Johar of promoting nepotism in the industry. Kangana's remarks came in the wake of a nepotism debate triggered by the suicide of young Bollywood actor Sushant Singh Rajput on 14 June in Mumbai.

Sushant was said to be battling depression and an investigation into the case is underway. The actor's family has pressed assisting suicide charges against Sushant's ex-girlfriend Rhea Chakraborthy.