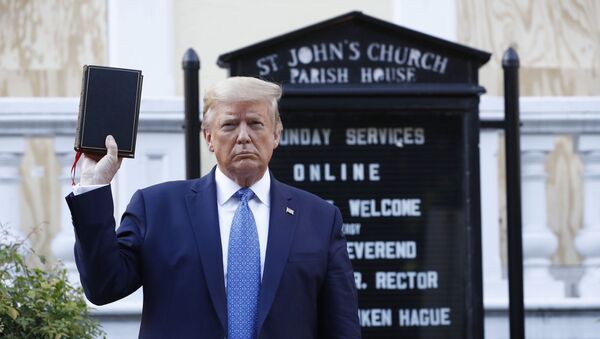 © AP Photo / Patrick Semansky
Subscribe
Max Gorbachev
All materialsWrite to the author
According to the Brookings Institution think tank, evangelical Christians are the largest religious group in the United States, with one in every four Americans professing evangelicalism. They are also an important voting bloc.

Donald Trump’s former lawyer Michael Cohen claims the businessman-turned-politician made a disparaging remark about evangelical Christians after a meeting with religious leaders. Cohen, who worked for Trump from 2006 to 2018, recently penned a tell-all memoir about the 45th president, excerpts from which were published by The Washington Post.

According to the 54-year-old, Trump met with evangelical leaders before the 2016 election. After the meeting ended, Trump reportedly told Cohen:

Cohen also claimed that the then presidential candidate had convinced a vast swathe of working-class white people in the Midwest that "he cared about their well-being". "The truth was that he couldn’t care less", Cohen wrote in his memoir.

Evangelical Christians are the largest religious group in the United States and were instrumental in Trump’s victory in the last election. 80 percent of the group is said to have supported Trump in 2016.

Nothing But Fan Fiction

In his book, Cohen paints a very negative picture of Donald Trump, describing him as an "organized crime don", a "master manipulator", "a racist", and "a fraud". Cohen also claims that Trump cheated during the 2016 election and won it with the help of the Kremlin, an allegation the president has categorically denied, calling it a "witch hunt" orchestrated by the Democrats.

Other allegations made in the book include:

At the same time, Cohen admits that he has a lot of affection for Trump and once considered him a father figure.

"I care for Donald Trump, even to this day, and I had and still have a lot of affection for him. I confess I never really did understand why pleasing Trump meant so much to me; to this day I don't have the full answer", Cohen wrote in his book.

White House spokesman Brian Morgenstern described Cohen’s memoir as nothing but "fan fiction" and lamented the fact that "the media is exploiting this sad and desperate man to attack President Trump".

Several tell-all books have been written about Donald Trump and his administration in recent years. Most of them were penned by his former assistants or officials who worked with him. The last such expose was written by the president’s niece, Mary Trump.

Michael Cohen was sentenced to three years in jail in 2019 after he admitted to lying to Congress, tax evasion, and bank fraud. He has been released from jail due to the coronavirus pandemic and is spending the rest of his sentence at home.

000000
Popular comments
SN is riveted to your news.
armor
7 September 2020, 21:42 GMT2
000000
Trump is like any othe dumb animal, do what ever he has to to serve him and only himself, no matter what it takes or who gets hurt, it's all about one demented selfish psychopath named Trump.