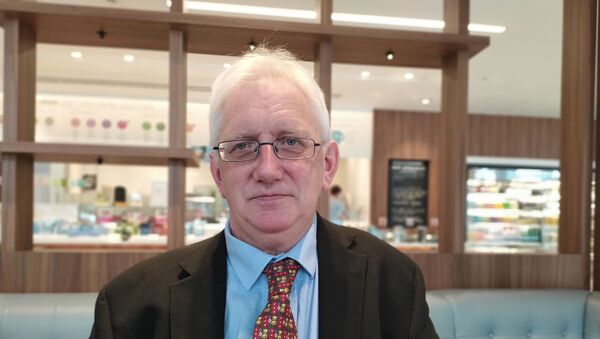 Mohamed Elmaazi
All materialsWrite to the author
Julian Assange's defence team were expecting to be able to go over a summary of each witness statement before their experts are cross-examined. They argued that it was in the interests of their client and the wider public to be able to hear the key submissions before they are challenged by the prosecution.

Craig Murray, a former British diplomat and whistleblower who has long followed the case of Julian Assange, has told Sputnik that he is dismayed by the decision of Judge Vanessa Baraitser to prohibit defence witnesess from giving a summary of their statements before they are cross-examined.

Mr Murray, who has been sitting with family members in the Old Bailey (Central Criminal Court) where the hearings are being held, added that:

"There are very important human rights issues at stake in this trial and the idea that the public and journalists should not hear a witness set out what they have to say before they're cross-examined is absolutely ludicrous".

Former British diplomat @CraigMurrayOrg reacted to the judge's decision not to permit summaries of witness statements to be given before they are cross examined. He said this morning failed to give "any confidence" in British justice in this case.

​Edward Fitzgerald QC, speaking for the defence, told the court that in addition to assisting the court it was necessary for their client, who has not had face-to-face contact with his lawyers for the last six months, for summaries of each witness statement to be able to be gone over before cross-examination. He added that for the wider public it was important that justice "must be seen to be done" and that the summaries would assist greatly to this effect.

James Lewis QC, speaking for the prosecution, was very much against the idea that a summary should be given before cross-examination. He also argued that other than medical experts all other witness statements (such as from a professor of journalism) were in fact not "experts" per se but rather were giving their opinions on matters of fact - a point strongly rejected by the defence.

Ultimately, Judge Baraitser determined that a maximum of 30 minutes would be permitted for each witness to get comfortable and situated but did not consider it necessary for summaries to be permitted before each witness is cross-examined because she had already read all the witness statements and ultimately she will be the "finder of fact" and not members of the public.

Sputnik has been granted video access to the court proceedings and shall continue to report on Mr Assange's extradition hearings as they progress.