Wild Animals Get Scared Too: Leopard Holds on Tightly to a Cot During Rescue Mission 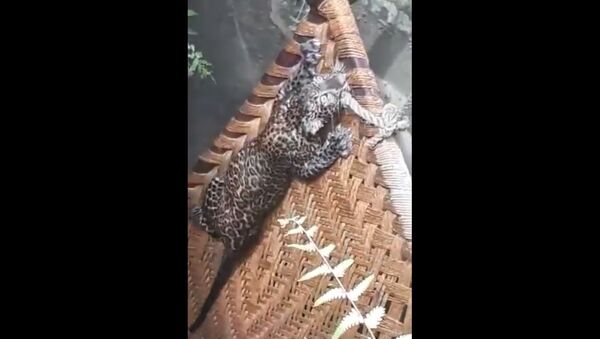 India is home to around 14,000 leopards and with many forest areas adjoining rural settlements, wild animals often enter human homes or become victim to man-made structures. The Indian Forest Department deploys employees to rescue wildlife in such situations.

Wild animals are quick to attack if they are challenged or threatened by humans, but with the overlapping of human settlements and forests, these wild creatures often find themselves in situations where they have to trust humans with their lives.

In a video shared by Indian Forest Service officer Ramesh Pandey, a young leopard is being rescued from a well with the help of a cot. Forest officials and villagers threw a cot tied to a rope inside the well to pull the leopard to safety. In the footage captured the creature is seen being pulled up while it holds on to the cot with its paws. The wide open eyes gives away the fear in the spotted animal.

There is no one size fits all method for rescuing wild animals. Ingenious methods and traditional knowledge prevail many a times, like in this rescue operation in Bijnor, the forest officials and villagers used a cot to pull out a sub adult leopard fallen in a well.
VC:UPFD pic.twitter.com/URztXnbqzY