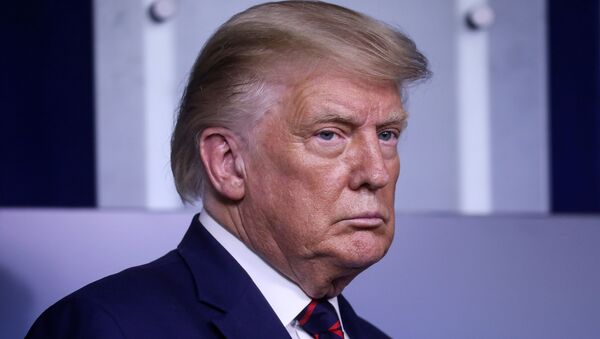 James Tweedie
All materialsWrite to the author
US President Donald Trump took to Twitter on Sunday to express anger over 'lies' spread by the media after days of spats with The Atlantic magazine and Fox News, formerly seen as a staunch supporter of the commander-in-chief, in the wake of a report alleging POTUS had tarnished the memory of US veterans.

US President Donald Trump has accused the opposition Democratic Party and 'fake news' media of orchestrating a disinformation campaign against him in the run-up to November's election.

Trump cited the recent claims in an article in The Atlantic magazine claiming he had insulted the memories of war veterans, specifically late president George H W Bush and Arizona Senator John McCain, both Republicans.

"The Democrats, together with the corrupt Fake News Media, have launched a massive Disinformation Campaign the likes of which has never been seen before," Trump tweeted on Sunday.

"They will say anything, like their recent lies about me and the Military, and hope that it sticks... But #MAGA gets it!"

The latest battle between Trump and the media erupted on Thursday, when The Atlantic published a lengthy article under the byline of editor-in-chief Jeffrey Goldberg.

It contained claims from four anonymous sources that the president had called two Republican leaders who fought in major wars "losers" and implied soldiers killed in Afghanistan were "suckers".

The article included unconfirmed allegations that Trump did not want to grant state honours to late Arizona Senator John McCain following his death from brain cancer in 2018.

Three sources also claimed that Trump also called late President George H W Bush a "loser" for being shot down and taken prisoner as a US Army Air Force pilot during the Second World War.

Democratic presidential candidate Joe Biden seized on the article to declare Trump unfit for office as commander-in-chief of the US armed forces.

But the president denied the claims in a series of tweets, accusing The Atlantic of concocting a "fake story" to bolster flagging circulation.

Trump's next target was journalist Jennifer Griffin, the national security correspondent for Fox News - once considered one of the most pro-Trump stations.

Trump called for Griffin to be "fired" on Saturday after she tweeted that two former White House officials had confirmed to her the key claims in the Atlantic article, as well as earlier allegations the President had refused to "drive to honour American war dead at Aisne-Marne Cemetery outside of Paris” during a 2018 trip to visit the graves of fallen US soldiers.

​Griffin also claimed one of her anonymous sources said: "When the President spoke about the Vietnam War, he said, 'It was a stupid war. Anyone who went was a sucker'."

Kamala Harris Says Trump Spends Time in 'Different Reality', Slams POTUS Over Statements on Racism
Trump avoided being drafted to fight in Vietnam after he was diagnosed with bone spurs in his heels. In 2019 he told the UK's ITV "I was never a fan of that war, I’ll be honest with you. I thought it was a terrible war."

"Not every line of The Atlantic article did I confirm," she admitted. "But I would say that [for] most of the descriptions and the quotes in that Atlantic article I did find people who were able to confirm and so you know I feel very confident in my reporting".

Defence Secretary Mark Esper defended Trump from the Atlantic allegations in a short statement on Friday.

Michael Cohen’s Book: Ex-Trump Fixer Slams POTUS as 'Bully, Racist and Predator'
"President Trump has the highest respect and admiration for our nation's military members, veterans and families. That is why he has fought for greater pay and more funding for our armed forces," Esper said.

Later that day the president's wife Melania Trump condemned the Atlantic for publishing claims from those hiding behind the mask of anonymity.

"It has become a very dangerous time when anonymous sources are believed above all else, & no one knows their motivation", she tweeted, calling The Atlantic's reporting "not journalism" but rather "activism" and hence "a disservice to the people of our great nation".

​Regime change in the USA?

Some commentators have even claimed the Democrats are laying the ground for a 'colour revolution' by stirring unrest and peddling a narrative that Trump is preparing to win by ballot fraud.

On Saturday Democratic Senate minority leader Chuck Schumer backed calls by Vermont Senator Bernie Sanders for a plan to force Trump from office in November if the election result is contested. Democrats have already claimed that mass mail-in voting could mean Trump appears to win on election night on November 3, only for Biden to be declared President weeks later once millions of postal votes have been counted. Lat month Hillary Clinton, who lost to Trump in 2016, said: "Joe Biden should not concede under any circumstances."

Former US Army officer and political analyst Scott Bennett told Sputnik the Democrats have a four-stage strategy to "steal the presidential election."

Bennett said the opposition will: