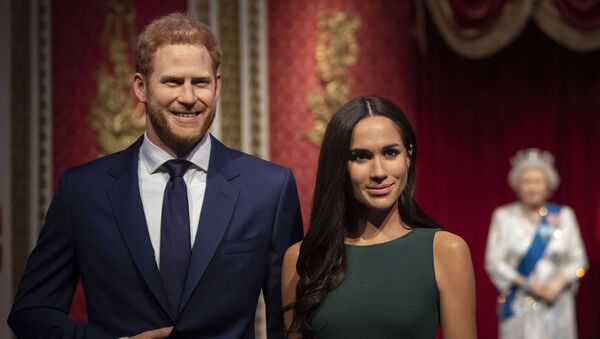 Lilia Dergacheva
All materialsWrite to the author
On Wednesday, the ex-senior royals made public their plans to join efforts with the American streaming giant Netflix, in a bid to efficiently work in diverse genres - from TV series to documentaries and children's programmes.

Meghan Markle and Prince Harry failed to tell the Queen about their Netflix deal, which could be worth an eye-watering $150 million, before announcing it in public, a royal source has claimed, as cited by The Sun.

"Harry did not inform the Queen about the Netflix deal", the source said, shortly after reports emerged that royal officials "will examine the pair's deal" as they agreed to approval of any commercial ventures they take on after quitting senior royal duties.

Her Majesty, 94, was reportedly told by her aides about the couple's venture, which involves their production company expected to make documentaries, TV series, feature films, and children's programmes. In particular, their newly announced production company will generate content that will include work on "mental health", an animated series about women, a nature documentary, etc., as the ex-royal couple vowed to make "impactful content that unlocks action" and name-dropped Netflix chief executive Ted Sarandos.

The 35-year-old Harry and 39-year-old Meghan, who recently bought a $14 million estate in Santa Barbara, signed a new deal with the streaming service, stressing they want to provide "hope and inspiration" with their projects.

However, according to a family insider cited by the Mirror, despite the couple having ditched formal royal duties starting in April, any profit-oriented plans would be "subject to discussion".

"It goes without saying any deals they are making will be scrutinised by the royal household", the source said.

Meanwhile, the Queen is reportedly aware of the possible road blocks the ex-royals could face when setting about their own commercial ventures:

"Her Majesty is all too aware of the pitfalls of when senior royals embark on lucrative projects - Prince Edward's production flop and some of the deals Sarah Ferguson has signed over the years to name a few", Fabulous reported citing a source. 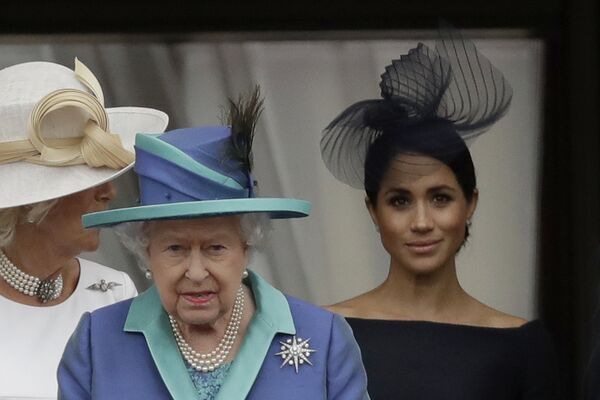 Britain's Queen Elizabeth II, Camilla the Duchess of Cornwall, left, and Meghan the Duchess of Sussex walk out onto the balcony to watch a flypast of Royal Air Force aircraft pass over Buckingham Palace in London, Tuesday, July 10, 2018.
© AP Photo / Matt Dunham

"Her view is simple, the Royals are not for sale and danger surrounds high-profile roles outside of the institution itself", the source said, adding however that the Queen, "knowing her grandson Harry as she does", knows the Duke and Duchess cannot be easily talked out of their plans.

Harry and Meghan got the green light to broker commercial deals in January, as the couple chose to abandon official royal duties in a bid to lead a personally and financially independent life in the US.

Earlier this year, they announced they would rather embark on something "that matters" and reportedly started work on their well-being empire called Archewell, in a reference to their son's name.