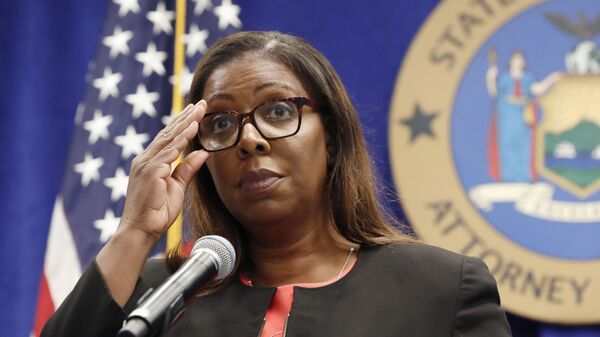 MOSCOW(Sputnik) - New York Attorney General's Office is moving to empanel a grand jury as part of the investigation into the death of black man Daniel Prude, which has sparked major protests in Rochester, Attorney General Letitia James said in a statement.

Prude's family is calling for the police officers involved in the death of the 41-year-old black man to be fired and criminal charges to be filed. The grand jury would determine whether charges should be brought in Prude's case.

"The Prude family and the Rochester community have been through great pain and anguish. My office will immediately move to empanel a grand jury as part of our exhaustive investigation into this matter", James said.

New York Governor Andrew Cuomo took to Twitter to praise the NY Attorney General for taking swift action after he called for the investigation into Prude's death to be expedited.

Earlier this week, I called for the investigation into Daniel Prude's death to be expedited.

Today, I applaud @NewYorkStateAG for taking swift, decisive action in empaneling a grand jury — justice delayed is justice denied and the people of New York deserve the truth.

On Friday, thousands of people took to the streets in Rochester, New York, calling for justice for Prude. Police used tear gas and pepper spray against the demonstrators, according to ABC News, which reported on Saturday that close to a dozen arrests had been made and at least three law enforcement officers were injured during the protests.

Earlier this month, Mayor of the US city of Rochester Lovely Warren announced that she had suspended police officers suspected of being involved in the death of Prude.

On Wednesday, the Rochester Police Department released a disturbing video of body camera footage (dating back to March) showing police officers approaching Daniel Prude who was running naked through the streets at night. Prude's family had called 911 saying he was going through a mental health emergency.

According to the video footage, Prude complies with police orders, but after he is handcuffed he starts to shout and spit. The officers then place a spit bag over his head and pin Prude to the ground. Eventually, Prude vomits and appears to go lifeless some minutes later.

According to Prude's family, he died of asphyxiation on 30 March.