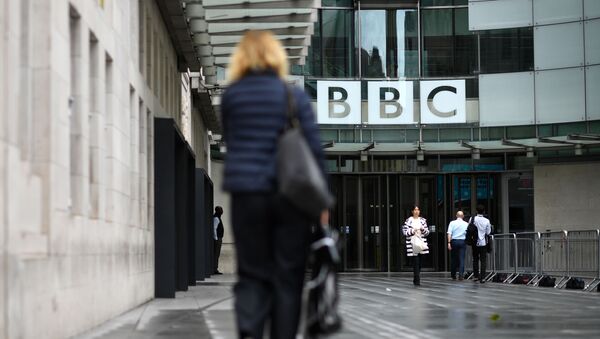 © AFP 2021 / BEN STANSALL
Subscribe
Lilia Dergacheva
All materialsWrite to the author
The head of the BBC, Tim Davie, has recently called for more impartiality in the national broadcaster’s ranks, suggesting that reporters should be more reserved when expressing their positions on social media - something which has been perceived as an attempt to “silence” journalism at large.

The BBC's freelance contributors and broadcasters were angered this weekend in the wake of new Director-General Tim Davie’s comments about restrictions on their use of Twitter and other social networks.

As Davie called for greater impartiality from his presenters and reporters, many of them, including some of the BBC’s biggest names, stood up in opposition to the move, stressing that the demanded restraint is hardly possible given today’s ubiquity of social media.

“If you want to be an opinionated columnist or a partisan campaigner on social media then that is a valid choice, but you should not be working at the BBC”, Davie charged while speaking in Cardiff, prompting many to speculate over whether the rules apply to them, and what they might lead to.

Art historian and journalist Bendor Grosvenor was one of the first to express his bewilderment at Davie’s speech, arguing the rule cannot universally apply to news and broader journalism.

I can absolutely understand this in news & current affairs. Across the whole BBC though? It would certainly rule me out ('who cares!?' you say, and fine, I'm a tiny, tiny player here). But given the ubiquity of social media in our lives now, is it actually practical? 2/3

“I can absolutely understand this in news and current affairs”, he wrote on Twitter. “But across the whole BBC? It would certainly rule me out. (Who cares?, you say, and fine, I am a tiny, tiny player here) but given the ubiquity of social media in our lives now is it actually practical? Because if the BBC can only hire people with either no opinions or afraid to express opinions, it might find its pool of available staff to be only the dull and timid. The BBC thrives on innovation and creativity. Might it be better to focus on balance, rather than silence?”

A BBC presenter who wanted to remain anonymous told the Observer that a meeting has been called this week by management that is expected to clarify the new rules, while freelancers are already reportedly infuriated  by changed tax arrangements that were introduced without prior warning.

“Surely we are employed because of our knowledge, to give an overview”, said one long-term contributor, as cited by the BBC.

“We are regularly retweeted by the BBC publicity machine because they know we help to publicise content. If we are not allowed to have personal voices this will not work. I think the BBC will soon find that new rivals, such as Times Radio, will be stepping up their own social media punditry instead”, the contributor concluded.

The plan to stop biased posting - a move that followed an opposing trend when journalists started to eagerly post their assessments on social media some time ago - is believed to be hindered by “the new intake of bright journalistic talent”, BBC reported. For instance, reporters who tend to communicate online and who are interested in journalism as a tool for change are expected to find the shift back to old-school regulations more challenging.

Among the personas now singled out over their alleged bias are Newsnight’s Lewis Goodall and award-winning reporter Rianna Croxford: both have been accused of pursuing what has been claimed to be political prosecutions and campaigns instead of reporting the raw facts. This weekend, Croxford, a community affairs correspondent who has covered a wide range of stories for the BBC, responded on Twitter, stressing her impartiality.

Apart from working accounts, BBC presenters often have separate ones that they use to promote their wider journalism and which may reveal their political positions. For instance, Andrea Catherwood’s personal page on Twitter has a “pinned tweet” that expresses her anger about the government’s handling of the education crisis caused by COVID-19.

000000
Popular comments
Good for him. He's actually requiring these reporters to exercise journalism instead of all this innuendo and slime smearing that they seem to enjoy. I hope if they show they cannot be journalists, that he fires them.