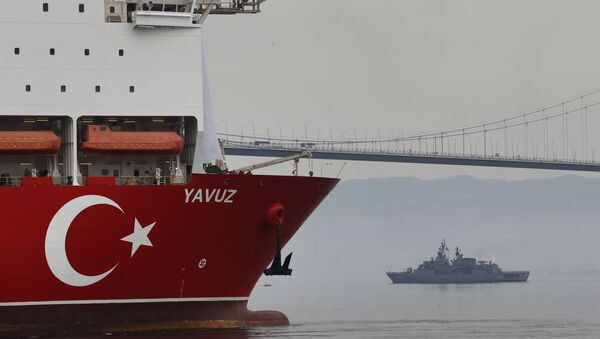 Tim Korso
All materialsWrite to the author
The two countries recently clashed over a disputed part of the eastern Mediterranean Sea after Turkey sent a seismic research vessel to seek energy resource deposits off the coast of Cyprus. Both states also sent their militaries to the region, sparking concerns their standoff might turn into an armed conflict.

Turkish Foreign Minister Mevlut Cavusoglu has accused Greece of lying, when the latter said it had never agreed to have technical talks on the Eastern Mediterranean with Turkey hosted by NATO, recently announced by the alliance's secretary-general, Jens Stoltenberg. According to the minister, Athens did agree to talks to prevent incidents in the disputed waters, but later changed its tune.

"It is noteworthy that Greece lied about the NATO secretary-general. [Athens] initially agreed, [but] then told they did not. It is, in fact, Greece that is lying and not the secretary-general", Cavusoglu said.

He added that Greece's actions demonstrate its alleged unwillingness to engage in dialogue as a means of peacefully resolving its issues with Turkey.

Tensions between the two countries have been escalating since Ankara sent a seismic survey vessel to the waters off the Cypriot coast, part of which Turkey sees as its exclusive economic zone, to look for oil and gas deposits. Athens does not recognise Ankara's claims and it vowed to counter Turkey's actions, with most EU states backing Greece in the conflict. Both countries mobilised their militaries sparking worries that a further escalation might result in an armed conflict. In a bid to de-escalate the situation NATO Secretary-General Jens Stoltenberg tried to broker talks between the two countries, but Greece agreed to take part in them only after Turkey withdraws its ships from the disputed waters.

As a part of the same Friday press conference, Cavusoglu condemned France, accusing it of provoking Greece to act aggressively against Turkey and urged Paris to stop "ridiculing itself" with "hysterical acts".

A day earlier, Turkish ambassador to France, Ismail Hakkı Musa, lodged a broader complaint against the entire EU during a panel on EU-Turkish relations, accusing the bloc of utilising a "two-faced" approach to handling a dispute between Turkey and Greece. The envoy argued that the EU has nothing to do with the dispute and should not try to drag Turkey and Greece into its "Western agenda". The top diplomat added that Ankara and Athens should resolve this issue on their own.