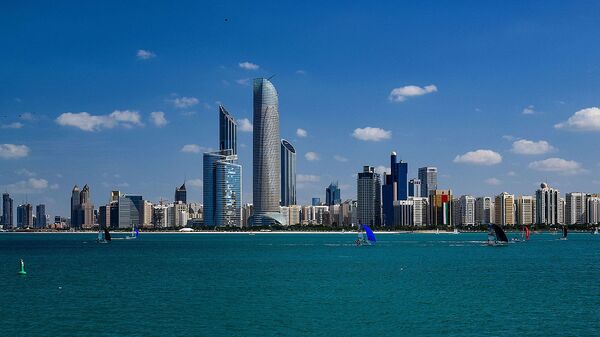 Elizabeth Blade
All materials
The peace deal between Israel and the UAE is genuine, says an official from Abu Dhabi, stressing that his leadership has been tired of waiting for the Palestinians to wake up and is now determined to press ahead with the agreement for the benefit of the entire Middle East.

While it is not yet clear when Israel and the United Arab Emirates will officially ink their historic peace agreement, the pact continues to make waves around the Middle East.

Palestinian factions, for example, held a video conference on Thursday, where they decried the upcoming agreement and mulled over steps to minimise the blow caused by the two countries' actions.

But the Palestinians were not the only ones to vent their anger. Since 13 August, when the announcement of normalisation was made public, the UAE has been under a barrage of criticism from some countries that refused to accept Abu Dhabi's move.

Such was the case with Turkey, who threatened to severe ties with the UAE and cancel its flights to the Gulf country. Similarly, Iran's Supreme Leader Ayatollah Ali Khamenei called the agreement "a betrayal" against the Muslim world, while Qatar opened a media campaign against Abu Dhabi slamming it for the decision to normalise ties with the Jewish state.

One of the articles against the agreement was even published in the Israeli newspaper Haaretz known for its liberal views and disdain for Prime Minister Benjamin Netanyahu's policies.

In his op-ed, Marc Owen Jones, a researcher, who appears to be linked to Qatar, says that the agreement reached between Israel and the UAE was not genuine and that the real peacemaker in the region was Doha. And that is was the latter who is contributing to the negotiation efforts between the Jewish state and Hamas, not Abu Dhabi.

That article, along with many others published in recent weeks, appear to have sparked an uproar in the UAE, and a source close to the highest echelons of the Emirati leadership who asked to remain anonymous conveyed to Sputnik that Qatari accusations could not be further from the truth.

"The leaders of the UAE believe in this peace deal; it is honest and genuine, and stems not only from the highest echelons but also from the ordinary people".

The Twitter comments by many Emiratis confirm his claims, and in recent weeks many users have released statements in favour of the deal and their leadership who chose to take the path of normalisation.

"Qatar doesn't like it, they are hypocritical and are jealous of the success achieved by the UAE, so instead of joining the efforts of peace and tolerance, they prefer taking another route, that of anti-Semitic approach against Israel and the Jewish people, fanaticism, radicalism, and destabilisation of the region", the official said.

In recent years, tensions between Qatar and the UAE along with a number of other Gulf states have escalated following allegations that Doha supported the radical Muslim Brotherhood movement, outlawed in some countries in the region.

In 2017, those tensions reached a new peak, when the UAE, Saudi Arabia, Bahrain, and Egypt closed their airspace to flights originating from Qatar and introduced a series of other measures to boycott Doha, subsequently leading to a lawsuit against themselves.

Now, as the deal with Israel is drawing closer, the source in Abu Dhabi says that chasm with Doha will only grow larger, due to the realisation of many Gulf leaders that the previous approach of "war, rather than peace" has gotten them nowhere.

"The UAE, along with other states of the region, have realised that Israel was there to stay. We realised that the Jewish people have been a positive part of our region and that they had nowhere else to go".

No More Waiting for Palestinians

What they also realised was that they were tired of pouring billions of dollars into aid for the Palestinians, without getting any prospects of peace in return.

"Over the years, the Gulf states have pledged some $200 billion to the PA and Gaza. They could have used that money to turn the area into a Silicon Valley. But they failed, and while our cash flows to unknown places, a resolution to the Israeli-Palestinian conflict is still nowhere in sight", the source said.

That, however, is now bound to change, promised the official and stressed that his country will "do everything in its power to encourage other states of the region to follow suit".

Although it is not clear which Arab states will follow in the footsteps of the UAE, there are speculations that it could be Bahrain, Oman, Morocco, and Sudan, even though officials in these states are keeping a relatively low profile when it comes to relations with the Jewish state.

But the official in Abu Dhabi says that it is only a matter of time.

"Nobody wants to sit and wait for the PA. Their current leadership hasn't been able to offer us a tangible solution for 25 years now. Israel, on the other hand, offered us an economic peace, and we are going to embrace it, because it will benefit all, including the Palestinians".