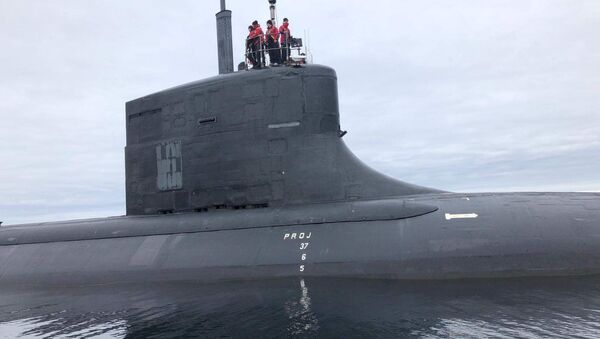 © US Navy
Subscribe
Igor Kuznetsov
All materials
The new installations at the vital Arctic port Tromsø will allow US and NATO submarines to replenish supplies during port calls, which, in turn, will open them up for longer deployments in the contested Arctic region.

The vital Arctic port of Tromsø in northern Norway has been expanded and refurbished in order to increase visits by US nuclear submarines, according to the military news outlet Breaking Defence.

The new installations will permit US and NATO submarines to replenish supplies, which will open them up for longer deployments in the key Arctic region.

According to Norwegian military spokeswoman Marita Isaksen Wangberg, the physical upgrade at Tromsø has been completed, but local officials are now finalising the "necessary adjustments and changes" to various local regulations. Wangberg stressed that this is the last step before nuclear submarines may visit the harbour.

A senior US defence official called the US-Norwegian relationship "great", describing Tromsø, the largest urban area in Norway above the Arctic Circle and the third-largest in the world trailing Russia's Murmansk and Norilsk, as a "strategic location" for US visits. According to the same Breaking Defence source, the visits, which would happen "about four times a year", would give more flexibility in the area not only to the US, but its allies as well.

Located over 300 kilometres above the Arctic Circle, Tromsø has of late become a focal point of US military activity, sparking the discontent of local opposition politicians and residents alike, who suggested that Norway is being "strong-armed" into accepting nuclear submarines against its will. Tromsø was one of the municipalities that wanted Norway to sign the UN nuclear ban and said no to both nuclear-powered vessels and nuclear arms on board.

Only a day before the Seawolf's arrival, six US B-52 bombers flew over NATO's 30 nations, including Norway, in a massive flyover stretching across the Baltic and the Black seas.

Furthermore, just days before the visit, the US Navy also reported about the visit of the destroyer the USS Roosevelt to Tromsø on 17 August as it wrapped up its 50-day patrol mission to the area.

Overall, the number of nuclear-powered vessels along the coast of northern Norway has increased, the Norwegian Radiation Protection Authority earlier reported, indicating its concern.

Norway is boosting its military cooperation with the US against the backdrop of elevating tensions in the Arctic. Neither Oslo, nor Washington make any secret of the fact that the public displays of nuclear submarines docking in Norway or other military activity aims to send a signal to Russia.

In recent years, bilateral Russian-Norwegian relations, traditionally good, have been soured by mutual espionage charges, distrust and military build-ups. While Oslo is increasingly worried about Russian military upgrades in the north and especially within the Northern Fleet based on the Kola Peninsula, Moscow is alarmed by Norway's expanding cooperation with the US, which features a rotating deployment of American marines, increased drills and technical collaboration.

000000
Popular comments
Such a pity for such a beautiful land, to paint it with bullseyes all over and invite giant destructive blasts, nuclear even, in order to, or so they think, take the first punch for an "empire" in its death throws. Truth is that its not the 80's anymore. Russia can retaliate and remove US from the map in under 20 minutes. Does norwegians know that? Do they love that country so much that they are prepared for the ultimateda sacrifice, in vain?