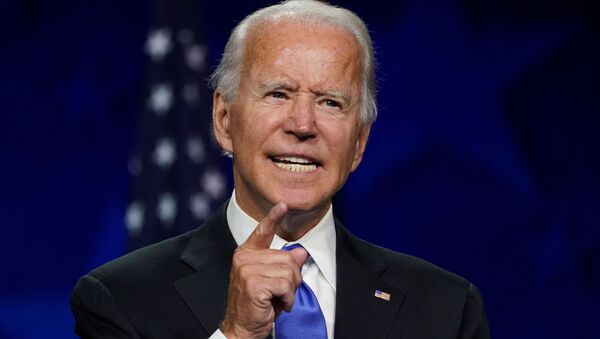 Lilia Dergacheva
All materialsWrite to the author
After meeting the family of an African American man from Kenosha, Wisconsin, recently shot by police, Joe Biden stirred up a genuine storm, with netizens accusing him of anything from rewriting history like "Marxists did" to suffering memory lapses.

Joe Biden has made a bizarre claim saying during a speech in Kenosha, Wisconsin, that the light bulb was invented by a black man rather than "a white guy named Edison".

The Democratic presidential hopeful made the claim when he addressed local community leaders after meeting with the family of Jacob Blake, a 29-year-old black American who was shot seven times in front of his children late last month.

"I cannot guarantee everything gets solved in four years, but I guarantee you one thing, it will be a whole heck of a lot better", said Biden.

"Why in God's name don't we teach history in history classes", he queried, adding unequivocally:

“A black man invented the light bulb not a white guy named Edison".

"There's so much. Did anybody know?", Biden questioned, prompting many to speculate on the matter and, more surely, coming up with a quick fact check:

"Thomas Edison did indeed invent the light bulb. Lewis Latimer (the black man Biden likely had in mind?) created a filament that allowed bulbs to burn longer", one struck back, with others making a cuckoo sign in response:

I saw a clip of Biden tonight he was like a little old man in a nursing home .
He was babbling about Edison then he saw his wife stopped in the middle of a press conference & said there is Jilly Im her husband .

This is a joke running for Potus

Joe Biden is rambling like crazy right now at this 'town hall' event. He's all over the place. Claimed he was in elementary school when Bull Connor was 'putting hoses to civil rights protestors' (he was 21 years old), said a black man-not Edison-invented the light bulb (false)

"This is a joke running for POTUS", one charged.

"They say that those who fail history are doomed to repeat it—before they can graduate. Except Joe", another weighed in.

Notably, the Twitter users’ fact checking was correct. Thomas Edison, known as the "Father of Invention", was first credited with creating the light bulb in 1879 and patented it on 27 January 1880.

The Department of Energy in 2013 wrote: "When Edison and his researchers at Menlo Park came onto the lighting scene, they focused on improving the filament — first testing carbon, then platinum, before finally returning to a carbon filament".

The debate came days after the shooting of Jacob Blake. During the 23 August incident that left the man paralysed, police arrived to the 2800 block of 40th Street in Kenosha after Blake's girlfriend "reported that her boyfriend was present and was not supposed to be on the premises".

Officers attempted to subdue him with a taser before opening fire, authorities said.

During an investigation Blake admitted to police that he had a knife and authorities recovered it from the driver's side floorboard of the car after opening fire.