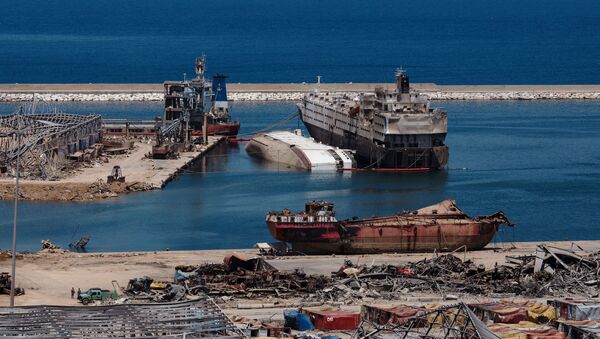 © REUTERS / ALKIS KONSTANTINIDIS
Subscribe
GENOA, Italy (Sputnik) - An independent international investigation is the only way to bring to justice those who were directly or indirectly responsible for the massive blast at the port of Beirut on August 4, former Lebanese minister of state for administrative development May Chidiac said in an interview.

Lebanon is conducting its own investigation, however, President Michel Aoun agreed to allow US Federal Bureau of Investigation (FBI) staffers to take part in the investigation alongside the Lebanese judiciary. At the same time, he called demands for an international investigation of the explosion in Beirut a waste of time.

However, Chidiac stated that the Lebanese people no longer trust the country’s political or judiciary leaders, following years of corruption and negligence.

"The Lebanese people no longer have faith in their government and system, especially since corruption, negligence, and incompetence led to the destruction of half of Lebanon’s capital," Chidiac said.

"On August 28, Ground Zero Beirut Relief Committee [initiative led by Chidiac] launched a campaign to collect signatures on a petition, calling for an international investigation to find out the truth behind the port explosion that occurred on August 4. We will then send it to Special Coordinator for Lebanon Jan Kubis and hope that once we reach 10,000, it will be forwarded to UN Secretary-General Antonio Guterres," Chidiac said.

In the petition, the ex-minister stressed the need for an independent international investigation to bring those responsible for the deadly blast to justice.

"In this letter, we request an international fact-finding committee to probe what caused the explosion, how it happened, and who is, directly and indirectly, responsible for its occurrence, how the authorities reacted and handled its aftermath, and any other detail that the public must know concerning this horrific crime," she said.

Petitioners have also expressed their concern about the handling of an internal investigation conducted by Lebanese officials, the ex-minister added.

"The Lebanese authorities are not qualified to pursue investigations, due to their negligence and corruption, as well as their dereliction of duty and ineptitude in dealing with this tragedy, and an independent investigation that is adept at uncovering the truth and punishing perpetrators is indispensable to justice," Chidiac said.

Lebanon's Army Discovers 4.35 Tonnes of Ammonium Nitrate Near Beirut Port Weeks After Deadly Blast
The explosion in the port was so strong that it left entire districts adjacent to the port area destroyed. The Lebanese government said the blast was caused by the improper storage of some 2,750 tonnes of ammonium nitrate by the port authorities.

The blast has triggered nationwide mass protests in the subsequent days and weeks. On August 10, the government of Hassan Diab stepped down in full. The president kept his post and, on Monday, appointed the country’s ambassador to Germany, Mustapha Adib, as the new prime minister and tasked him with forming a new government.

000000
Popular comments
Prediction: Un-Biblical Israel will get away with it AGAIN— just like they did with their USS Liberty attack, their 9/11 attack, their MH17 attack...