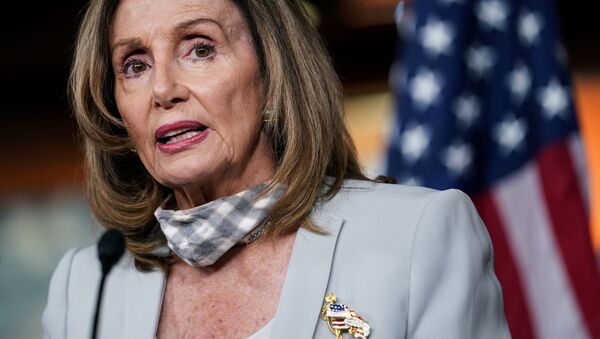 The house speaker was caught, without a mask, doing a wash and a blow-dry in a hair salon amid the pandemic, despite having urged Americans to stay home and abide by safety rules, including wearing face coverings.

Hairstylists have organised a protest outside Nancy Pelosi in San-Francisco, demanding beauty salons, which have been closed due to the COVID-19 pandemic, reopen.

Protesters were seen "decorating" the nearby tree with curlers and blow-dryers. According to media reports, the women described themselves as "angry customers" who wanted to get their hair and nails done.

"We cannot work, we want to work. We want our hair done, we want our nails done. We want to socialise, we want freedom!", one of the protesters shouted.

Protesters have gathered in front of Nancy Pelosi’s San Francisco home and are stringing up curlers and blow dryers on a tree after a video surfaced of Pelosi getting her hair done indoors/maskless at a SF salon @sfchronicle pic.twitter.com/v6KVORByaP

HAIR DRYER PROTEST:
Protestors gather outside of @SpeakerPelosi house in #SanFrancisco. They chant about freedom and place hair dryers on a tree.
WATCH 4PM Press Conference from SF eSalon Owner Respond to Pelosi on #CBSNBayArea at https://t.co/peHOt8n9a9 pic.twitter.com/BsKCIhQk8b

Another video shows protesters discussing Pelosi's hypocrisy, as she decided to visit a hair salon, in breach of state health restrictions, while other people did not have such an opportunity due to the pandemic, and small businesses that have had to close have been struggling to survive.

The official remarks from the demonstration are over, now the group is split in two discussing their opinions of Nancy Pelosi and the salon video situation @sfchronicle pic.twitter.com/F1SBZv5Dt3

The video of Pelosi visiting the salon was released by the owner of the business, Erica Kious, who said she was shocked at her hypocrisy.

Pelosi defended herself, saying it was a "set up" organised by the hair salon owner and insisting she has always abided by the safety rules during the pandemic. She also explained she was not wearing a mask because she was getting a wash. "I always have a mask. For me, for the people I'm encountering, but also for my family. But I don't wear it when getting my hair washed", the congresswoman said.

President Donald Trump took to Twitter on Thursday to comment on the salon trip, joking that if Pelosi was framed by the salon owner, the latter should become house speaker instead of her.