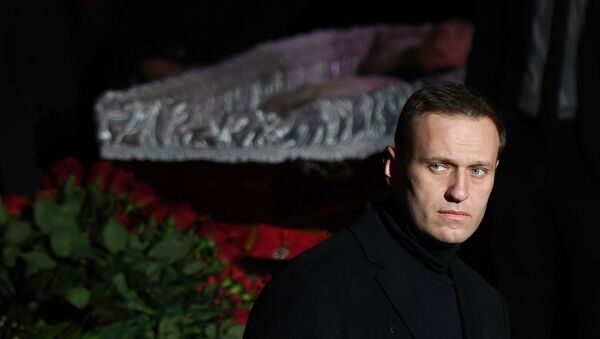 The day before, German Chancellor Angela Merkel reaffirmed that her government's reaction to the Navalny case, including possible sanctions, will depend on Russia's response to recent developments around the opposition figure.

The Russian ambassador to Germany on Friday stated that claims of Moscow being in some way complicit in the situation with Navalny are improper.

"[Claims that Russia] is somehow connected to this incident … are absolutely improper," the ambassador said.

The diplomat also called for "refraining from preliminary estimates and relying only on facts."

At the same time, according to presidential spokesman Dmitry Peskov, the Kremlin hopes for a dialogue with Germany on the substance allegedly found in Navalny's body.

"Based on the statement of German chancellor and other officials, we know that German specialists found some toxic substances. In this case, we are expecting a dialogue with German colleagues and hope to get information about what kind of substance it is," the spokesman told reporters

Peskov stressed that Moscow had been open about Navalny's situation from the beginning.

On Wednesday, Berlin claimed that a German military laboratory possessed undeniable proof of 44-year-old Navalny's poisoning with a nerve agent from the Novichok group.

Immediately after Navalny fell ill, his spokeswoman Kira Yarmysh claimed that he might have been poisoned.

Russian Medics Tested Navalny for Cholinesterase Inhibitors, Siberian Head Toxicologist Says
Upon conducting multiple tests, Russian medics established that no traces of poison had been found in his system, saying that Navalny's condition was caused by an abrupt drop of glucose in his blood due to a metabolic imbalance.