Cities Called ‘Anarchist’ by Trump Have ‘Sent Police Into Every Protest’, Not Defunded Them - Journo 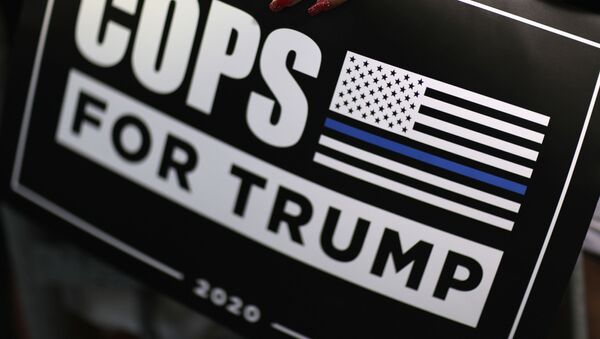 © REUTERS / Leah Millis
Subscribe
A memorandum issued on Wednesday by the White House directed a review of federal funding allocated to certain cities that “allow themselves to deteriorate into lawless zones” and “permit anarchy, violence, and destruction.” In addition to the legal questions raised by the order, one expert claims it’s also filled with disinformation.

Eugene Puryear, host at BreakThrough News and author of "Shackled and Chained: Mass Incarceration in Capitalist America," joined Radio Sputnik’s Political Misfits on Thursday and told hosts Bob Schlehuber that although he lives in one of the so-called anarchist cities, he has yet to witness the chaos and lawlessness alleged by US President Donald Trump.

Trump’s memo detailed that more cities could be added to the list for a litany of actions: “unreasonably” refusing federal law enforcement “assistance”; defunding or disempowering a police department; blocking police access to areas or structures they are “lawfully entitled to access”; and more.

If none of the enumerated criteria apply, a city can still be labeled an “anarchist jurisdiction” due to “any other related factors the Attorney General deems appropriate.”

Puryear asserted the memo implies that the four listed cities have become “lawless” or defunded their police departments, which is not the case.

“All the cities he listed did not, in fact, defund the police. And in fact, most of them have been widely panned by the activists demanding ‘Defund the Police’ … they’ve sent police into every protest,” he asserted.

“In every single one of the cities he listed, the police there locally have massively brutalized protesters, used chemical weapons, arrested people for no reason at all.”

If anything, Trump’s bombastic assertions have done more to tie nonviolent, Constitutionally-permitted protesting to illegal acts and, as of now, anarchy, concluded Puryear.

While the situation at hand regarding nationwide protests is complicated, the US two-party system now appears to have reached something of a “consensus,” Puryear said - at least among many Republicans and moderate and mainstream Democrats who appear more vocal about property damage than the loss of life.

Democratic New York City Mayor Bill de Blasio slammed Trump’s memo during a Thursday news conference, claiming the US president’s efforts will not make it past a judge.

"I want to speak directly to the president,” he said.

"If you persist in trying to deny the funding that's keeping New York City going in the middle of this crisis, we will see you in court and once again we will beat you in court."

000000
Popular comments
Here we have an evil facist dictator, aconman that is abusing the US Presidential office both worldwide and within the US 24/7. The US is not one iota greater today than it was 4 years ago, you don't believe that, then check it out. The US will never be any greater under Trump for the simple reason that Trump is not doing anything in the US to achieve that goal. Trump has the brain of a delinquent teenager, he believes that it he can financially destroy all the US trade competitors of the world the US will then be great again. A fools MAGA. Meantime countries stop buying US products, towns across the continent become the new Detroits, the farmers go bankrupt, the soup queues grow and Trump imposes marshall law. Next is civil war mass destruction and death akin to Vietnam and Iraq brought home to the US terrorist nation compliments of Trump, Pompeo and the numb scull Republican Senators.
amike
4 September 2020, 09:57 GMT
000000
Newsfeed
0
New firstOld first
loader
LIVE
Заголовок открываемого материала
Access to the chat has been blocked for violating the rules . You will be able to participate again through:∞. If you do not agree with the blocking, please use the feedback form
The discussion is closed. You can participate in the discussion within 24 hours after the publication of the article.
To participate in the discussion
log in or register
loader
Chats
Заголовок открываемого материала
Worldwide
InternationalEnglishEnglishMundoEspañolSpanish
Europe
DeutschlandDeutschGermanFranceFrançaisFrenchΕλλάδαΕλληνικάGreekItaliaItalianoItalianČeská republikaČeštinaCzechPolskaPolskiPolishСрбиjаСрпскиSerbianLatvijaLatviešuLatvianLietuvaLietuviųLithuanianMoldovaMoldoveneascăMoldavianБеларусьБеларускiBelarusian
Transcaucasia
ԱրմենիաՀայերենArmenianАҧсныАҧсышәалаAbkhazХуссар ИрыстонИронауОssetianსაქართველოქართულიGeorgianAzərbaycanАzərbaycancaAzerbaijani
Middle East
Sputnik عربيArabicArabicTürkiyeTürkçeTurkishSputnik ایرانPersianPersianSputnik افغانستانDariDari
Central Asia
ҚазақстанҚазақ тіліKazakhКыргызстанКыргызчаKyrgyzOʻzbekistonЎзбекчаUzbekТоҷикистонТоҷикӣTajik
East & Southeast Asia
Việt NamTiếng ViệtVietnamese日本日本語Japanese俄罗斯卫星通讯社中文（简体）Chinese (simplified)俄罗斯卫星通讯社中文（繁体）Chinese (traditional)
South America
BrasilPortuguêsPortuguese
NewsfeedBreaking
08:56 GMTCIA Reportedly Warned US Military of Likely Presence of Children Near Afghan Drone Strike Target
08:56 GMTFrance, Russia Agree Modalities of Settling Champagne Import Controversy, Minister Says
08:28 GMTThere's No Unreleased Sex Tape of Kim Kardashian, Lawyers Say on Claims of 'Graphic & Better' Part 2
08:26 GMTMan Attacks Guards Over Refusal of Entry Without Health Pass in France, Reports Say
07:38 GMTAustralia Had 'Grave' Concerns Over French Submarine Capability, Prime Minister Says
07:33 GMTEight Dead, 7 Missing in China After Passenger Ship Capsizes
07:33 GMTBoris Johnson Slammed for 'Casual' Approach to National Security, 'Unclear Prioritisation of Risks'
07:16 GMTBritish Boxer Amir Khan 'Kicked Off' US Flight Over Row About Colleague's Face Mask
06:55 GMTAs US Prepares to Leave Iraq, Ex-Advisor to Iraqi President Says Kurds Need Reliable Partners
06:52 GMTTwo Women Arrested for Tearing Up Trump Signs and Snatching MAGA Hat From Child Escape Jail Time
06:46 GMT'F**k Joe Biden!' New Yorkers Take to Streets to Protest Vaccine Mandates, Link COVID Rules to Nazis
05:56 GMTAustralia May Rent or Buy Nuclear Subs From US, UK Until Its Own Fleet is Built Under AUKUS Deal
05:34 GMTColombia Condemns Maduro’s Participation in Celac Summit
05:14 GMTOver 50 London Police Officers Deployed to Oxford Street After Reports of Gunman - Video
04:30 GMTNot My Style: Adorable Golden Retriever Doesn't Like Wearing Shoes
04:26 GMTLive Updates: India Registers 30,773 New COVID-19 Cases
03:52 GMTMeghan Markle Wears Earrings Made of Same Diamonds That Decorate Her Mysterious Pinky Ring - Report
03:12 GMTIsraeli Security Forces Capture Last Two Fugitives Who Escaped From Gilboa Prison, IDF Says
03:10 GMTFrench Blindsided as AUKUS Details Were Discussed at G7 Summit Leaving Macron Out - Report
02:25 GMTBiden Administration Worried High-Level UN Meetings Will Become COVID-19 ‘Superspreader’ - Report