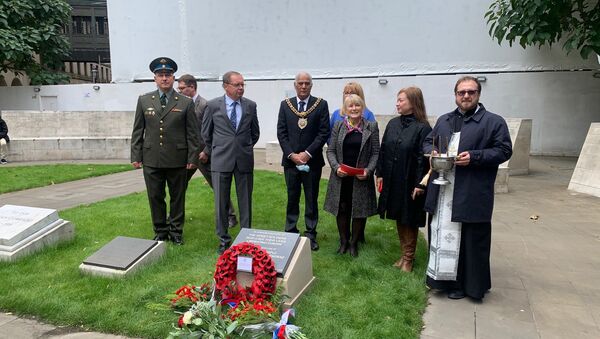 Jason Dunn
All materialsWrite to the author
The siege of Leningrad by Nazi Germany stands among the most brutal blockades in world history, resulting in the deaths of around 1.2 million Soviet citizens and soldiers. Today, the Russian community and representatives from the Manchester area pay tribute to those who lost their lives.

Marking the 75th Anniversary of the siege of Leningrad, a brand new plaque commemorating the Red Army personnel who died liberating Europe in World War II was unveiled in St Peter's Square, Manchester on Thursday. 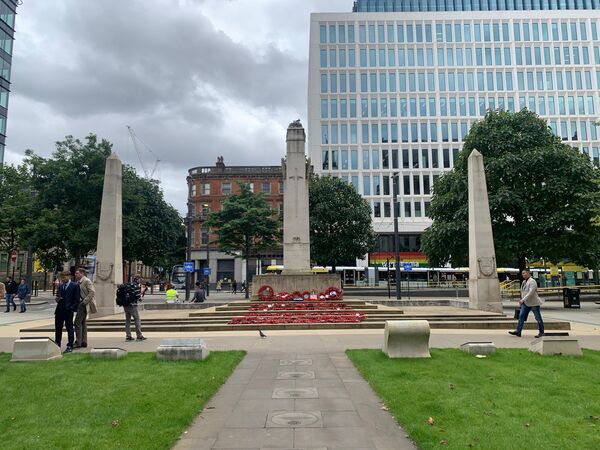 The event was hosted by the Lord Mayor of Manchester, Cllr Abid Latif Chohan, and Russian Ambassador to the United Kingdom Andrey Kelin, military veterans, as well as community representatives.

​In an address from the Manchester Cenotaph war memorial, Ambassador Kelin welcomed attendees to the unveiling ceremony of the “Memorial in honoured memory of the Soviet soldiers who gave their lives liberating Europe, and in recognition of the brave people of the besieged Leningrad”. 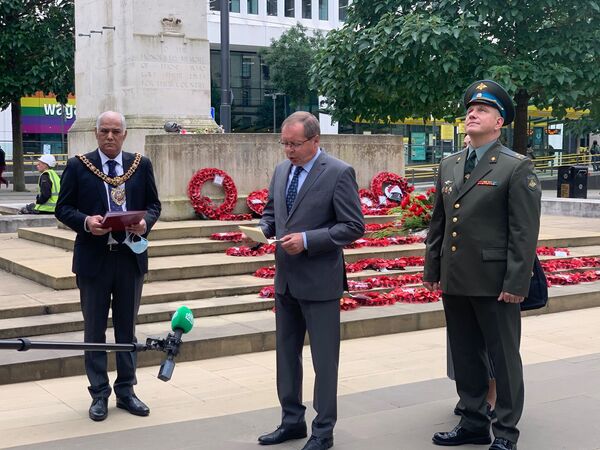 "The significance of the long and bloody battle for the Victory of the Soviet people over Nazism is huge, which is why it is particularly important that we have gathered here today. [The day when World War II ended] made it clear that the enemy will never be able to break and suppress the people who stood up to defend their Motherland", the ambassador said.

He added that the event gave an opportunity to remember the "sincere brotherhood of arms of Soviet and British people, the twin cities’ ties between Manchester and Leningrad".

Ambassador Kelin paid tribute to the opening of the Second Front by the Western Allies who "organised the Arctic Convoys from the UK and the US to the northern ports of USSR with much-needed cargo". 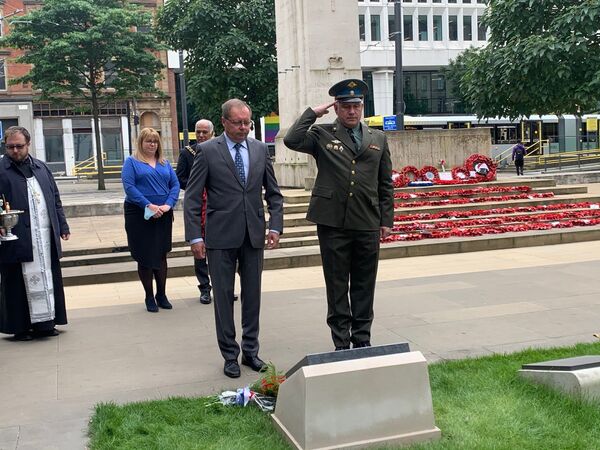 "To show our eternal gratitude to the veterans of the Arctic Convoys, we have presented them with the '75th Anniversary of Victory' medals. The memory of these and other heroic examples of joint fight and mutual support lives on".

Following the speech, Ambassador Kelin said that "knowing and studying history is the basis for the future".

"Unfortunately, in some countries in Europe they tend to forget what has happened in the past but here in Great Britain they value and highly appreciate the treasury of the Second World War", he said, in an apparent reference to the removal of Red Army monuments in Ukraine, Poland, and the Czech Republic. 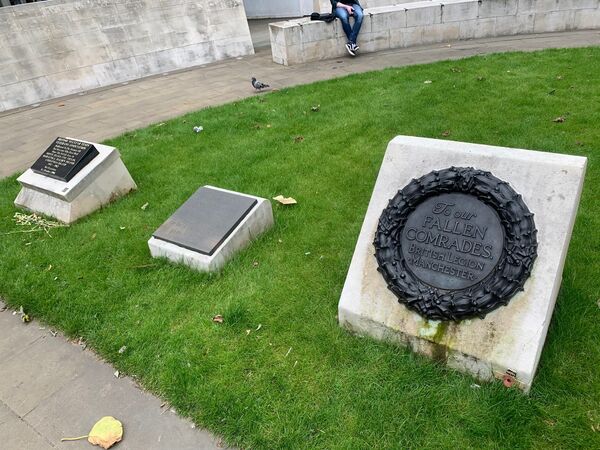 Nick Robertson, who was also responsible for carvings on the cenotaph when it was controversially moved in 2014, said that he also sculpted the Victims of Nuclear Testing plaque, also on display as well as the new piece honoring those who died during the siege of Leningrad.

"What this does is it really points out that we've got to find things that bring people's attention to the layers of history", he said.

"I think just having the words 'Soviet Soldiers Liberating Europe' is a massive thing. It's so obvious to me but to a lot of people it's actually cause for though". 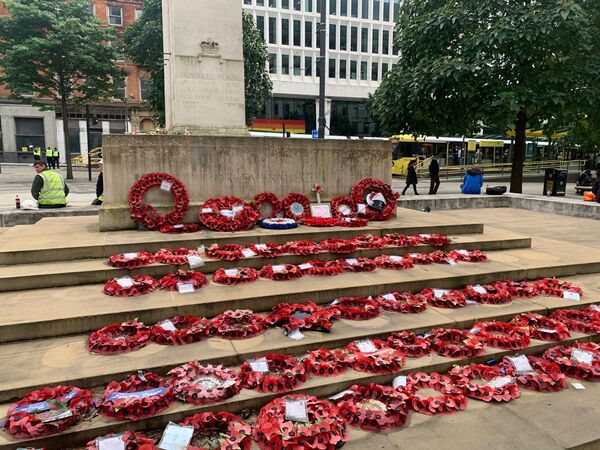 Robertson said that he wishes a QR code could have been added that would tell the story of the Red Army victory at Leningrad in order to combat anti-Russian sentiment.

"This is an opportunity to suggest that we have much more in common than other nations we think we have something in common with", he added. 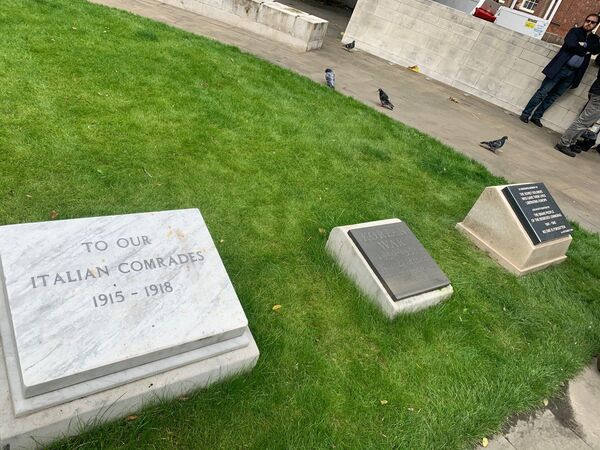 The Lord Mayor of Manchester hailed the relationship between Manchester and Russia and said that the plaque represents "friendship between all communities". 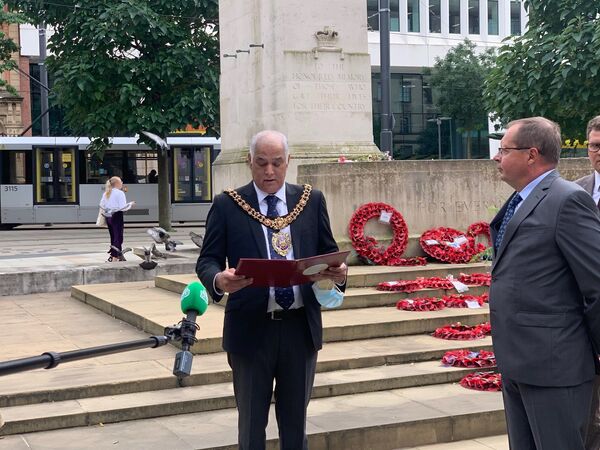 Adhering to social distancing measures, a sequence of wreaths were then laid at the base of the newly-uncovered plaque. First by Ambassador Kelin, followed by the Lord Mayor, and then one from the Russian community. 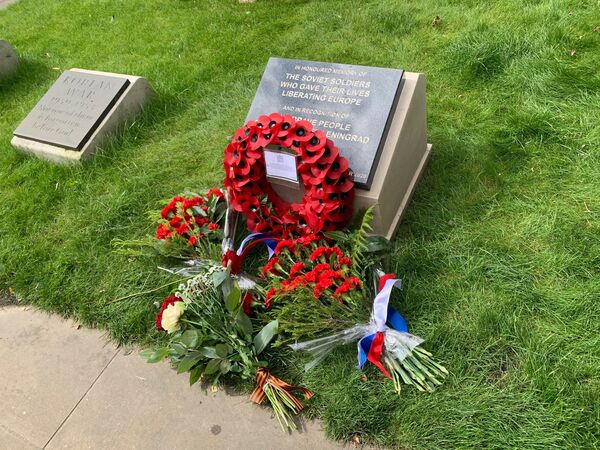 An Orthodox service was also held, with prayers recited in memory of the fallen soldiers at Leningrad.

The siege of Leningrad by the Axis coalition, led by Nazi Germany and accompanied by Finnish, fascist Italian, and Spanish-volunteer troops, was one of the longest and destructive sieges during the Second World War.

Lasting from September 1941 until January 1944, the prolonged military blockade by the fascist alliance was intended to starve and completely destroy the city as well as its entire population, which served as both an industrial centre of the USSR and a symbol of the 1917 Russian Revolution. 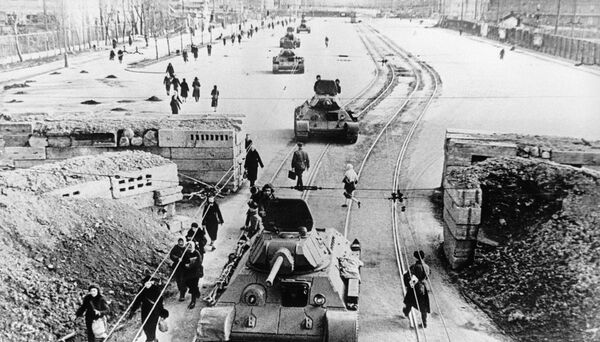 Leningrad during the blockade. (File)
© Sputnik
/
Go to the photo bank

A maintained occupation of the city had been ruled out by the German high command as they had no intention of being responsible for supplying food to its inhabitants. Therefore, Hitler planned to complete raze Leningrad to the ground and as part of his objective to carve up Soviet territory as ‘Lebensraum’ (Living Space) for the Aryan race. 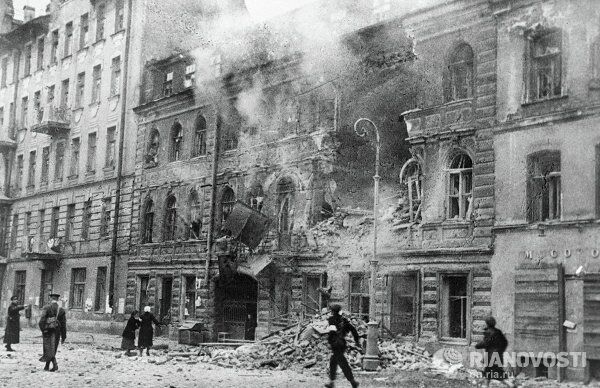 One of Leningrad's historic buildings crumbles after being struck by German artillery.
© RIA Novosti . Vsevolod Tarasevich
/
Go to the photo bank

As a prize for their support in Operation Barbarossa, Hitler would also gift some of the northern areas of Russia to Finland. According to Soviet journalist Lev Bezymenski, the Nazis had plans to rename the city to ‘Adolfsburg’ following its capture.

However, by 1944 the tide of war on the Eastern Front had significantly turned in the allies favour and Soviet offensive operations from January through March broke the siege and the Axis forces were repelled. This marked a crucial stage at the beginning of the Red Army’s liberation of the occupied USSR and later all of Eastern and Central Europe. 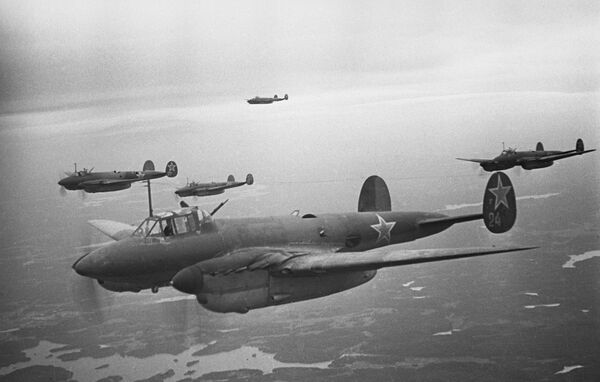 Great Patriotic War of 1941-45. Soviet aircraft bomb enemy's defenses near Leningrad during the blockade of the city in 1943
© Sputnik / Gregory
/
Go to the photo bank

While 1,400,000 civilians were rescued by military evacuation, around 1.2 million civilians and soldiers are estimated to have died during the siege of Leningrad. Between 1941 and 1942, starvation claimed up to 100,000 lives a month. By the time the siege was lifted entirely, between a quarter and a third of the pre-siege population had died from hunger.

The people and local leadership of British cities such as Coventry and Manchester had been resolute in establishing a fraternal British-Soviet wartime alliance. 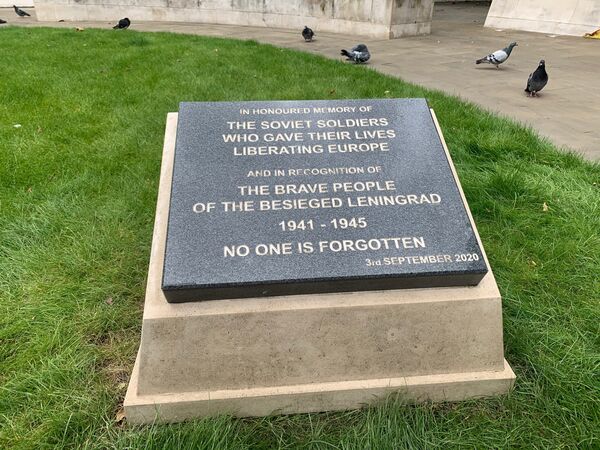 The historic links between Manchester and Leningrad, in particular, began in September 1941, when Nazi Germany first launch its siege on the Soviet City. Then Lord Mayor R. G. Edwards issued a cable on behalf of all political parties to the chair of the Leningrad Soviet expressing his admiration and support for the Soviet people.

“The citizens of Manchester have suffered grievously at the hands of the enemy and are doing all in their power to produce the weapons that will enable the united forces of the USSR and Great Britain to defeat the enemy as they surely will”, the Lord Mayor declared.

After some failed attempts by the Anglo-Soviet friendship groups to link Manchester with the then Soviet Ukrainian cities of Kiev and Kharkov, initiations from Leningrad authorities to Communist Party of Great Britain (CPGB) - affiliated trade unions eventually culminated in the establishment of formal ties between the two.

A 1949 telegram from the Leningrad Trades Council conveyed fraternal greetings to the “foremost representatives of the working class of Britain who raise their voices on behalf of peace against the warmongers”.

“Soviet Union invariably manifests a sincere desire to strengthen international co-operation, to establish friendly relations with the United States and Britain and develop as far as possible mutual economic ties”, it said.

In September 1962, when a delegation headed by Lord Mayor R. E. Thomas visited Leningrad. Discussions between the Leningrad City Soviet saw the drawing up of a friendship agreement between the two cities.

The Agreement on Further Development of Friendly Relations between Leningrad and Manchester for the period 1962/63 was signed between the city authorities and solidified the concept of fraternal relations which included cooperation on civic, cultural, educational and scientific endeavors.

While the Russian city has had its former name ‘St Petersburg’ restored, evidence of Anglo-Soviet relations still exists. Perhaps the most iconic symbol is a former Soviet statue of Friedrich Engels, the co-author of the Communist Manifesto and who helped establish the ideas of scientific socialism alongside Karl Marx, which now stands in the centre of Manchester.

A statue of Friedrich Engels was unveiled today in Manchester, where he lived and wrote 'The Condition of the Working Class in England'. pic.twitter.com/hObLTS3nRB

000000
Popular comments
The so called D-Day was like a picnic in comparison to the Battle of Stalingrad. I always laugh when the deluded Brits celebrate the V-Day after massacring a bunch of kids and pensioners that left to fight for Germany after the proper battles like Stalingrad or Kursk wasted hundreds of thousands of German special forces servicemen.