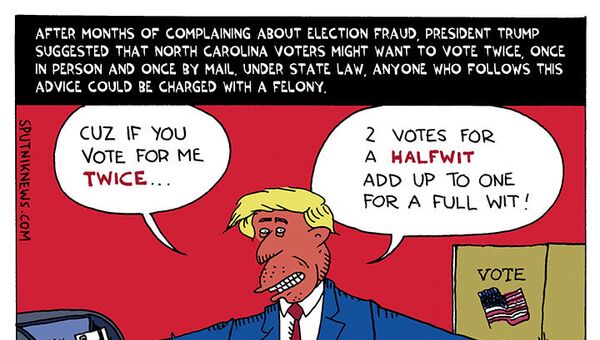 © Sputnik / Ted Rall
Subscribe
International
India
Africa
After months of complaining about alleged future election fraud by the Democrats against him, US President Donald Trump this week told North Carolinian voters to go ahead and try and vote twice. That’s illegal - each person can only vote once.

On Wednesday, during a campaign trail speech in Wilmington, North Carolina, Trump told his supporters to try and vote twice in the November presidential election, suggesting they go to the polls even after voting by mail to "make sure it counted."

"Well, they'll go out, and they'll go vote, and they're going to have to go and check their vote by going to the poll and voting that way, because if it tabulates, then they won't be able to do that," Trump told local news station WECT in Wilmington, while standing in front of Air Force One.

Twitter later flagged a pair of tweets carrying the same message with a public interest notice for violating its Civic Public Integrity policy.

Despite the possible illegal outcome of someone managing to cast two votes, The Donald obviously wouldn’t mind - as long as the double vote were for him.