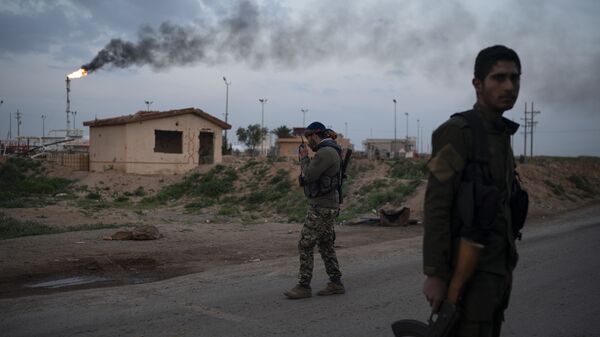 The US troops, jointly with the Arab-Kurdish Syrian Democratic Forces, maintain control over a part of northeastern Syria, concentrating around the oil and gas fields in the provinces of Al-Hasakah and Deir ez-Zor.

The US oil deal with the Syrian Kurds breaks international law and is used as cover for US illegal policy to undermine Damascus’ peace efforts, the heads of the Russian and Syrian coordination centers on refugee repatriation said in a joint statement on Thursday.

"The deal defies international law, violates the sovereignty and territorial integrity of Syria, serves as a cover for funding US-controlled terrorist enclaves and serves as a continuation of Washington's criminal policies aimed at thwarting Damascus' efforts for the post-conflict restoration of legitimate power and unity in the country. Please note that such actions are illegitimate and illegal," the statement read.

The illegal presence of the US and its allies in the northeast of Syria has lead to a plundering of the country's natural resources and fanned tensions, the statement said.

"One of the serious concerns today is caused by the situation in northeastern Syria where the illegal presence of the US and its allies within the international anti-terrorist coalition on the sovereign territory of the Syrian state leads to the plundering of Syria's natural resources and fomenting hotbeds of tension across the region," the statement read.

The name of the company has not been revealed, however, the Russian Foreign Ministry said that the company in question is Delta Crescent Energy.

The US troops with the SDF, retain control over a part of northeastern Syria containing most of the country's oil and gas reserves.

The Syrian government sees the US presence there as a violation of its sovereignty and an illegal attempt to seize Syria’s natural resources.