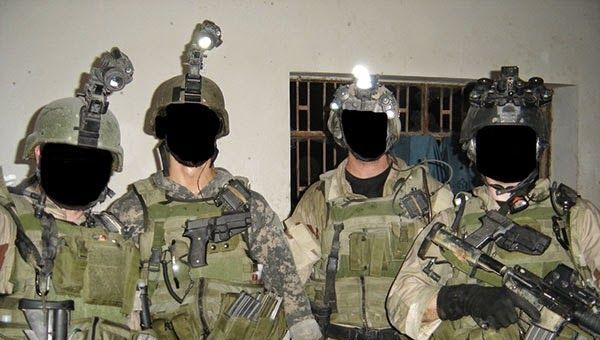 Mohamed Elmaazi
All materialsWrite to the author
Britain’s complicity in war crimes in Sri Lanka have been brought into the spotlight by a new book by investigative journalist Phil Miller about the mercenary firm Keenie Meenie.

Dr Jude Lal Fernando is assistant professor at Trinity College Dublin and is the director of Trinity Centre for Post-Conflict Justice. He is also the coordinator of the People’s Tribunal on Sri Lanka which found the Sri Lankan state guilty of genocide and USA and UK complicit in genocide against the Tamils.

Dr Fernando explains in detail the colonial origins and geostrategic nature of Britain’s involvement in Sri Lanka and the significance of war crimes investigations opened up by the Metropolitan Police Service into the activities of the mercenary firm Keenie Meenie.

Sputnik: Describe, briefly, the political context of Sri Lanka in the 1980s for those who might not be aware.

Dr. Jude Lal Fernando: The 1980s saw the open military confrontation between Tamil people in the north and east of the island represented by the Liberation Tigers of Tamil Eelam (LTTE) and the Sri Lankan state. During the previous decades the Tamil people had seen their every attempt at non-violent protest for equal rights and justice being met with the most horrifying racial pogroms. The LTTE was formed by dedicated youth who saw the older generations’ political methods only leading to increased violence from the Sinhalese and took up arms to defend the people from the violence of the state. The demand from the people in the north and east of the island for a sovereign, independent socialist state of Tamil Eelam was marked clearly by the late 70s, including Sri Lanka’s own parliamentary elections. During the 80s we saw a transformation in the consciousness of the Eelam Tamils, where more and more became convinced that the armed struggle of the LTTE is the only way their political demands can be achieved. 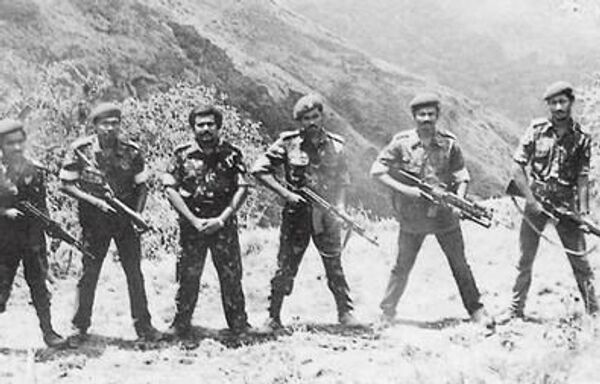 LTTE leaders at Sirumalai camp, India in 1984 while they are being trained by India's foreign intelligence agency RAW
© Wikipedia

The ‘defence of the unitary state and the country’s sovereignty’, was and is the political rallying cry from both the main Sinhala political parties against the demand of the Tamils. However the unitary structure of the state was not conceived by the Sinhalese but by the British. In 1833 the British amalgamated the Sinhala and Tamil national formations to form a unitary structure. By doing this they provided the basis for the Sinhalese – who were more in number in the island as a whole – to rule over the Tamils. This meant that the strategically important Tamil populated north and east of the island will be under British control as long as Sinhalese are loyal to the British. This nexus between the unitary state, Sinhala supremacist politics and British control continues to this day – albeit Britain is now playing second fiddle to its ally, the USA.

In 1979, the director of the UK security service MI5, Jack Morton visits Sri Lanka making practical recommendations to reorganise the intelligence apparatus. The target is Tamil resistance. Just a month before the Sinhala racist mobs carried out the largest pogrom in July 1983 killing thousands of Tamils with the full support of the security forces and police, the Sri Lankan police officers toured Belfast to study counter-insurgency operations and attended the ‘international conference on terrorist device and methods’ organised by MI5 in London.

Sputnik: What exactly is it that British mercenaries are suspected of doing in Sri Lanka during this time period?

Dr. Jude Lal Fernando: As the UK investigative journalist Phil Miller has revealed with immense amount of details the UK’s security company named as Keenie Meenie Services (aka KMS) was highly involved in training the Sri Lankan security forces. By the end of the 1980s, the Sri Lankan security forces, after gaining much experience in repression with its war against the Tamils engaged in brutal repression of the uprising in the Sinhala south by massacring around 60,000 people, according to conservative official figures.

New Book Reveals Thatcher-Era British Mercenary Army Secretly Operated Across Globe
Keenie Meenie trained the most notorious para-military wing of the Sri Lankan police, the Special Task Force (STF), from the beginning of the war against the Tamils.  The STF is known to have massacred, abducted and tortured scores of Tamils, particularly in the Eastern Province. They were also responsible for the massacres in the Sinhala south.

Keenie Meenie trained  the STF in forming riot squads, firing, handling explosives and weapons, particularly M16 Automatic Rifle, Counter Terrorism Search and so on. As the Tamil resistance intensified with the popular support the Keenie Meenie also trained helicopter gunship pilots. A former British army helicopter pilot who worked for Keenie Meenie claims that he himself was involved in killing 152 LTTE members. Some news papers in the UK claimed that the British mercenaries were leading ground and aerial attacks against the Tamils which caused massive amount of deaths and destruction.

Sputnik: Is it just British mercenaries who are implicated in these war crimes or is the British state more widely?

Dr. Jude Lal Fernando: Para-military forces like Keenie Meenie give ‘credible deniability’ to the British state. Even the use of the word ‘mercenary’ is misleading. [W]ords such as ‘private’ and ‘commercial’ are a façade and is deceptive. These security companies are not like the ones that guard shopping malls and supermarkets who are meant to catch shoplifters. Keenie Meenie is not an underground criminal gang which is running away from the state security apparatus.

I think we should not be fooled to think that Keenie Meenie’s operations in Sri Lanka have nothing to do with the British state. In investigating in any crime one of the key factors is to scrutinise those who had full knowledge of the direct perpetrators. The British state had full knowledge of the Keenie Meenie which was not a clandestine organisation. By isolating Keenie Meenie the British state is attempting to hide its responsibility in indirectly and directly arming the Sri Lankan security forces. Moreover the UK banned the LTTE in 2001 at a time the LTTE had clearly indicated the need for political negotiations by declaring a unilateral ceasefire and then the UK led the EU ban on the LTTE in 2006 when the LTTE had entered into a ceasfire agreement with the Sri Lankan state.

This was done when the UK was holding the EU chair. These moves emboldened the Sri Lankan state in every way that paved the way for the massacre of  thousands of Tamils in the last phase of the war from 2007-2009.  [T]he UN estimates over 70,000 people perished. Keenie Meenie played only one part of this large scale British political and military operation in Sri Lanka.

Sputnik: Why would the UK concern itself with the internal politics of Sri Lanka, what exactly is the nature of its interests with the country?

Dr. Jude Lal Fernando: [T]he main interest of the UK in Sri Lanka lies in the island’s strategic location in the Indian Ocean. The geopolitically strategic and military interests which existed since the time of the colonial period overshadowed commercial interests. In fact, India was the ‘Jewel of the Crown’, but Sri Lanka provided the British with the most strategic harbour, in Trincomalee in the Tamil areas, to control India. This harbour could be secured only under a unitary political structure that is controlled by the Sinhalese. The Tamils could not be trusted by the British because they were politically more tuned to the Indian independence movement.

Sri Lanka Accused of Raping Tamil Men Years After Civil War Has Ended
The Sinhalese, like the Loyalists in Northern Ireland, were groomed by the British in so many ways as the “true heirs” of the whole island with a sense of racial supremacy. The Tamils were portrayed as invaders from India. The strategic usability of the island increased immensely as the UK/USA-led wars in the Middle East unfolded and as a move to contain China’s sphere of influence in the Indian Ocean. All these have to be borne in mind when talking about Sri Lanka.

Sputnik: How significant is it that the Metropolitan Police Service have announced their investigation into alleged war crimes committed at that time?

Dr. Jude Lal Fernando: Can an institute that comes under a state that is complicit in a crime investigate the crime? For me this is nonsensical. It is like entrusting the US authorities to investigate the Blackwater operations in Afghanistan and Iraq as if the US government has no link whatsoever with the world’s most powerful mercenary army. Please bear in mind the UK Home Office is still ‘finding’ some of the files related to Keenie Meenie which should have been released long ago to the National Archives.

However, there is more to this move. Opening up the investigations against Keenie Meenie will make the British state appear impartial, victim-friendly and democratic whereby the real political relationship between the Sri Lankan state and the British state is not scrutinized. In concrete terms, the British governments want to distance themselves from the actual crimes committed against the Tamil people in Sri Lanka while strongly supporting the Sri Lankan unitary state. Legally the British state can say that Keenie Meenie is not a state entity, but it is an absolute lie politically. It is necessary to highlight this connection in these so-called investigations. The People’s Tribunals on Sri Lanka which were held in Dublin in 2010 and Bremen in 2014 found out that the UK and USA  are complicit in the genocide of the Tamil people. These Tribunals thoroughly investigated the political and military support given by these states to Sri Lanka in the war against the Tamils. 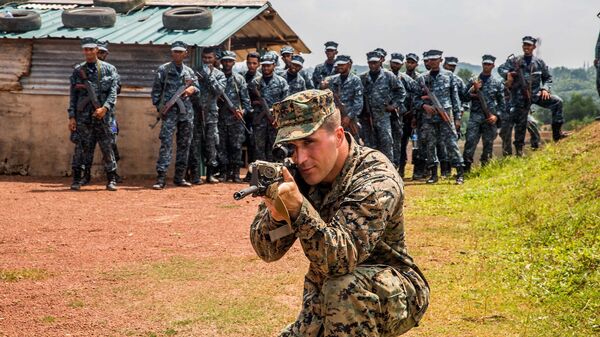 US Marines exercise with newly created Sri Lankan Marine Corps in 2017. Both the UK and the US actively cooperate with the Sri Lankan military.
CC BY 2.0 / US Indo-Pacific Command /

Sputnik: Do you think that the current investigations will lead to actual arrests and prosecutions?

Dr. Jude Lal Fernando: There is a coordinated move by the powers who are complicit in the war against the Tamils to reduce the violation of collective rights of the Tamil people to mere individual rights. For me these investigations are geared towards that end. For these powers the most disturbing demand is the Tamil collective right to homeland in the north and east of the country where lies the the Trincomalee harbour. Even if arrests are made and prosecutions proceed against the individuals of Keenie Meenie the deep structural relationship between the Sri Lankan and the British state,  which is the main reason behind the genocide of Tamils,  will not be impaired. Instead it willl be concealed  from our public consciousness.

After the end of the war in 2009 there is an immense pressure that has been mounted on the Tamils to trade off political justice with criminal justice, but there is no independent entity that has been set up to deliver criminal justice. This means neither criminal justice nor political justice. This is what the Tamil activists need to bear in mind. They cannot expect the powers who are complicit to help them. They should expose not simply the individuals who were involved in a  range of crimes committed against them, but also the political entities that directly and indirectly orchestrated these crimes.